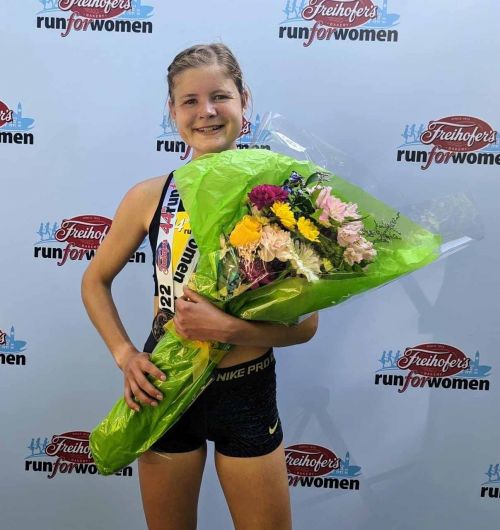 By the time you read this, the 44th running of the Freihofer’s Run for Women will be well in the history books. It was a spectacularly sunny day. Some complained it was too warm, for others, yours truly included, it was perfect. 25 year old Allie Ostrander from Seattle, Washington was first across the finish line clocking a 15:48. Let’s be clear. I couldn’t even cover 2 miles in that time. But that’s not the point of toeing the line for most of the participants, perhaps even more so this year.

About 40% of the almost 2500 registered runners were first timers, race director Kristen Hislop told me on race day. She thinks that many women who started walking and running during the pandemic were ready to, as she puts it, try something, and that something was the hometown race, Freihofer’s Run for Women. Additionally, Hislop says they emphasized that you could walk, that this is not just a race for “the elites.”

I’m far from an elite runner, and after logging more miles than I ever thought possible during the pandemic for charity events I was a bit ‘toasted’ and needed a break, something I heard from other runners. So, I’ve been power walking and mixing in a little running. That provided a different mind-set for me. I felt more relaxed. It gave me a chance to ask participants what is the allure of this race - the need for speed (had to go there!) or the camaraderie? Hands down, camaraderie, married with ambiance, won. These ladies like being with friends and family. They relish the opportunity for their non-running loved ones to get a front row seat to cheer. And yes, the cookies post-race don’t hurt. But the heart of the Freihofer’s Run for Women is about celebrating the ability to move and celebrate with others. 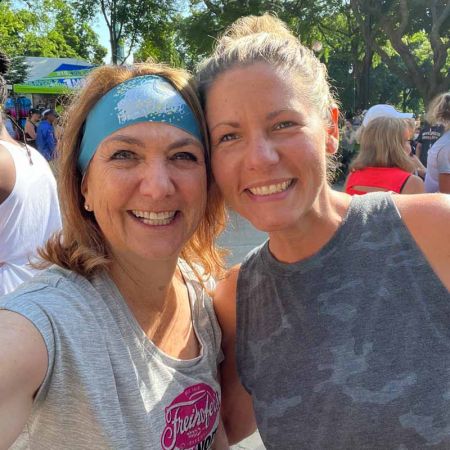 As I walked up from the parking garage to the race start, I fell in step with Libby. She’s got one stepchild and runs this race whenever her work schedule permits. She shared that at a Labor Day race on Cape Cod the race director gave kudos to moms. In his view it’s the moms bringing their children to races that whetted the appetite to run in the younger generation, thus keeping running alive. Moms like Sarah, who drove from Worcester, Massachusetts to be with family, compete and cheer her 8-year-old son, Bear, as he navigated the kids 3k course. Yes, Friehofer’s has been hosting a kids run for years, and it’s always well attended. 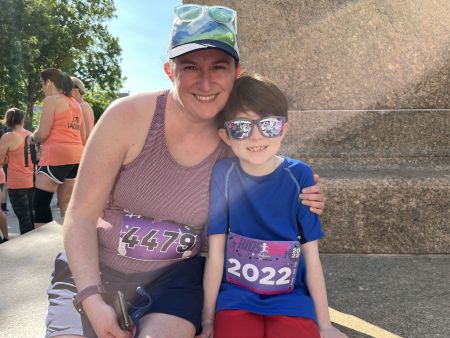 Sarah with son Bear who ran the Kids' Race 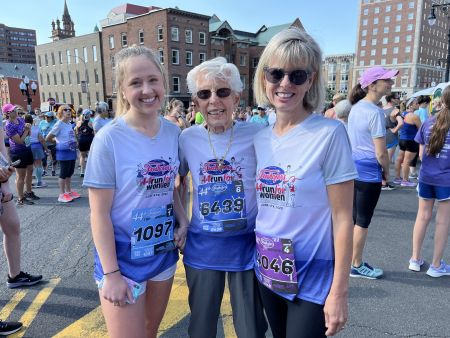 Because I wasn’t as intent on a finishing time, my walking breaks afforded me and others doing the same, the chance to encourage those who seemed to struggle, like 19-year-old Angela. I encouraged her to walk with me for a bit. As she got her breathing regulated, we picked up the pace and she took off. When I saw her at the finish line she was on the phone telling someone about her great race. Everyone has a story about how and why they toe the line. My friend Keri endured a nasty face plant a few weeks prior to the race while out running. But that didn’t sideline her. Super attentive to her footing, she finished faster than she expected to. And what about the grandmother- mother-daughter team? Grandmother Nancy Gerstenberger competed in the 90-99 age group, as the most senior participant. “Slowing the roll” is something even the top runners can enjoy. 31 years ago Denise Herman, an elite runner, helped me break 26 minutes at this race. People asked why she wasn’t at the front of the pack. What she didn’t tell anyone was that she was newly pregnant but she didn’t want to sit out the fun of the event. This year she was 1 of 4 women recognized for running this race all 44 years. And by the way, her daughter Brianna, 2 weeks before her wedding, ran it as well. 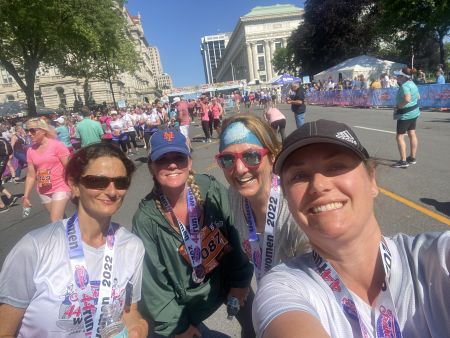 Then there was the trio of Clifton Park moms I leap-frogged for 1.5 miles, Sarah, Stephanie, and Vanessa. At the end we crossed about the same time and had a chance to chat. Sarah, all of 42, told me she just finished treatment for breast cancer after getting the diagnosis this past fall. I shared that my diagnosis was 3 years ago. Without words we nodded, recognizing the power and delight of moving. And in the end, isn’t that at the heart of running? It’s not the pace, it’s that we can. 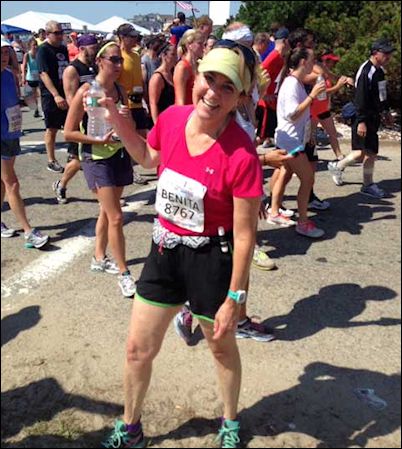 Dr. Benita Zahn is a certified Health and Wellness Coach working with clients at Capital Cardiology Associates. Benita spent more than 40 years as a health reporter and news anchor at WNYT in Albany, NY. She covered issues such as wellness, treatment breakthroughs, aging, nutrition, and the latest health care trends. Benita’s work has taken her around the world and across the USA.  She continues to produce and host  “Health Beat” a digital health interview program that posts every  Monday and Thursday on wnyt.com and can be heard on the station’s podcast. Benita is a contributor to  the weekly “Live Smart” page in the Times Union, the HMRRC Pace Setter and the new magazine 55+LIVING. Benita also created and co-hosts the podcast EVERYTHING THEATER.