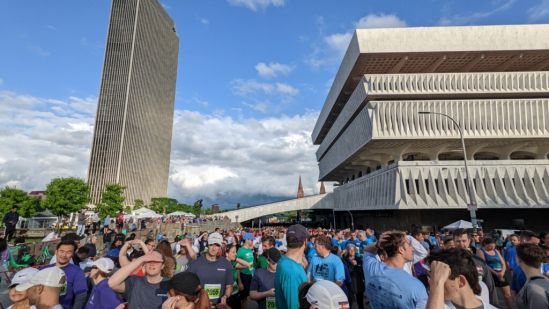 As the race lined up, teams clamored together in their corrals and matching t-shirts waiting for the gun sound.

In addition to being a major fundraiser for HMRCC and its charitable projects such as scholarships, grants, STEM, and the Just Run Program, the CDPHP Workforce Team Challenge brings employees in the Greater Albany area together through running.

Each year HMRCC and CDPHP choose a charity to donate to along with contributions from participants. Hundreds of thousands of dollars have been raised this way. This year, the chosen charity was the Oakwood Community Center in Troy.

CDPHP’s Public Relations Manager Natalia Burkart said that this event is a “way for companies to get together and raise money for charity and engage in a little healthy competition.”

As a healthcare insurance provider, CDPHP takes pride that this event “promotes health and wellbeing in the community,” said Burkart.

This year, there were over 350 teams participating in the event.

Jessica Murdock, a DMV employee, loves to run. For this event she put on her racing shoes and wore her coined “DMV blue” sparkly eyeshadow to put her best foot forward on the line.

Off the road, the plaza was filled with tents housing teams’ after-run snacks and beers. As the race was winding down and plenty of walkers were filling to the finish, teams began to gather and rejoice in post-run laughter with co-workers.

Tents were lined with tables, pizza, and the occasional sprawled out runner.

At the Pioneer Bank tent, four were relaxing and taking in the beautiful night. They were enjoying beverages and each other's company. Philip Cortese was seated on a bench below the three women nearby and laughing about how he is not a real runner, but a walker who enjoys this event year after year.

“I think we have a fun time. Those of us who aren’t runners walk together and chit-chat,” said Cortese. “It’s a great way for the company to promote teamwork.” 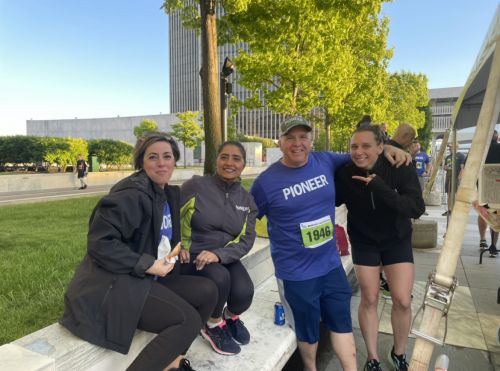