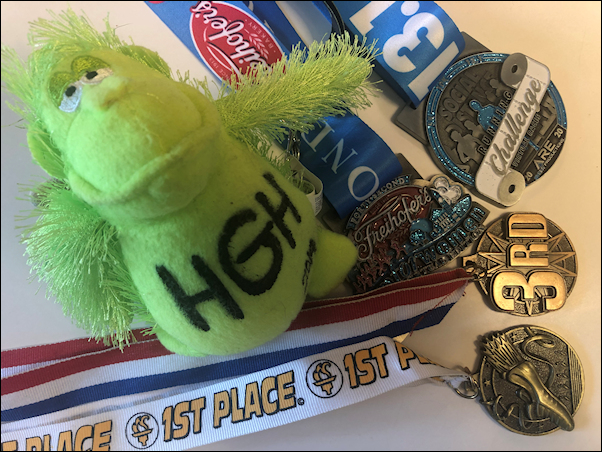 A couple years’ worth of mementos for placing, or at least participating,
in local races. The cookies are long gone

I don’t just run for my body, I run for my brain. That may explain why, in the seventh decade of life, I continue to pursue plastic trophies and fake-bronze medals with the avidity of an 8-year-old.

Three years ago, I didn’t think I was taking up running to compete. Sure, I got started (with three whole weeks of practice) so I could enter a friend’s small trail-race fundraiser, but that was just to prove I could finish. Which I barely did, after twisting an ankle and limping the rest of the way.

But even at this infant stage I had a goal, finishing in less than an hour, that was my first taste of the runner-geek’s self-competition. Thanks to the ankle, I lost, so of course I had to try racing again. And again and again. And eventually I began winning the competitions with my own data and taking home age-division medals and cookies.