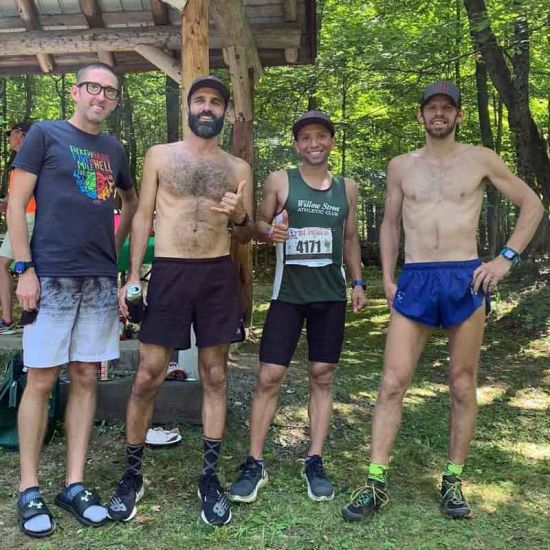 I have been racing since I was in high school. I raced every season of college and every season since then minus half a season in the winter of 2020 when my ankle was broken. I have run hundreds and hundreds of races in total, and yet I do not believe I have run another race in which the name itself speaks so precisely to what a person is getting themselves into as The Hard as Hell Half Marathon.

Even a few weeks out from race day I had not expected I would sign up. I am typically of the mindset that races are difficult enough without crafting a race course, which specifically accentuates that difficulty. And when I saw the race shirt logo which depicted half a demon's face grinning and wreathed in flames, a chill went up my spine. It was not until I learned that a friend and former local runner – Jakob Irwin – would be visiting and staying in the town of Warrensburg where the race was being held that I first considered it. 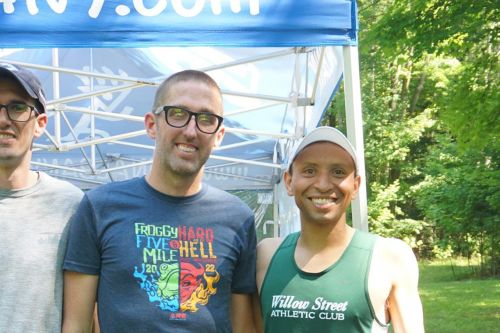 I decided to consult with an expert – someone who derives inexplicable joy from running and racing on hilly terrain – my friend and local legend Shaun Donegan. When we have discussed meeting up for weekend runs in the past, he has often posed to me the prospect of routes that wind up and down mountains with hundreds if not thousands of feet of elevation gain, which I flatly decline and tell him (more or less) that taking me on a run like that may endanger our friendship. The Hard as Hell Half has a counterpart race held at the same time called the Froggy Five Mile, which Shaun has won several times, and I knew from this he could offer me expert advice regarding the Half. My biggest concern was the fact that I done little to no hill training and was now considering signing up to run the most brutally hilly race of my entire running career.

"Dude, you'll be fine" he said, "there are a few good climbs but they are gradual."

With that I registered and my fate was sealed.

In the days leading up to the race I tried to formulate some sort of strategy, anything that might make it seem less intimidating to myself.

"Just go hard on the downhills and do what you can on the uphills."

"Just break up the race into sections in your mind and only worry about one section as a time."

"You've run other races that were ALMOST as bad as this one; this will just be a little bit worse."

"Just don't drop out of the race, and if you cry during the race try not to do it in front of anyone."

Waking up the morning of the race was the second time in all my history of racing in which my first thought as I awoke was, "Why did I ever agree to this?" (The other was an ultramarathon which I signed up for after numerous terrible experiences in regular marathons). I showed up late to the race itself, giving me only enough time to get my racing bib, pin it on and jog to the start. At the line we were informed the course was slightly modified for the 2022 edition due to construction on the race route, which essentially added another small hill, which I would liken to someone coming over while you are maxing out at the gym doing squats and tacking on an additional five-pound weight, saying, "What's another little bit, right?" And your face is already red and veiny from the effort and you don't have the extra energy to scold them. 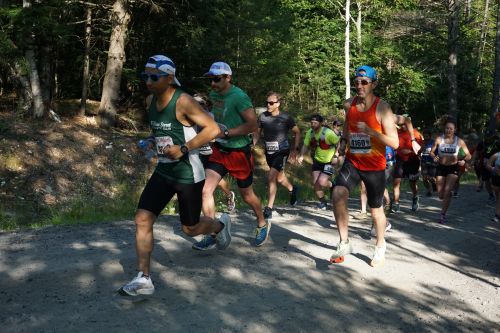 "The first 2.5 miles is all downhill, you're gonna love it," Josh Merlis said to me from a mountain bike as I crested the initial incline. He was not wrong. I did not really feel like I was in a race until the 2.5 mile point when there was the first real hill of the race, which still was not too bad. Even through about 5 miles I just felt like I was out for a nice pleasant Sunday run. Then it all took a sudden and horrifying turn.

I of course knew what was coming because I had just run down the same section I had to go back up, and somehow it was so much different and worse than I had imagined. Every step felt like a massive exertion. My pace slowed to a crawl. I was gasping for air as though I had just been stricken with an asthmatic episode (which I have experienced in the past and therefore could draw upon as a parallel). At 6 miles I could not fathom how I could possibly complete the race. I was barely moving forward. In that moment I firmly believed there has been some sort of demon magic on the course to make the hill coming back somehow taller and further than that same hill going out. It was closest to the "hitting the wall" sensation I had ever encountered in a race under 20 miles. The only thing which prevented me from dropping out of the race was the fact that even if I did I still needed to get the rest of the way up this hill to get back to my car. I thought of what I would say after I bailed out. "I wasn't prepared. I got in over my head. I will just have to regroup and try to come back stronger next year to finish what I could not this time." Never in my running career have I ever dropped out of a race from it being mentally and physically more than I could handle. I was already angry and embarrassed with my choice, even though I had not quite dropped yet. I wanted just come to a full stop and crumple to the ground, and just wait for someone to find me and drag me the rest of the way to the back to the parking lot. 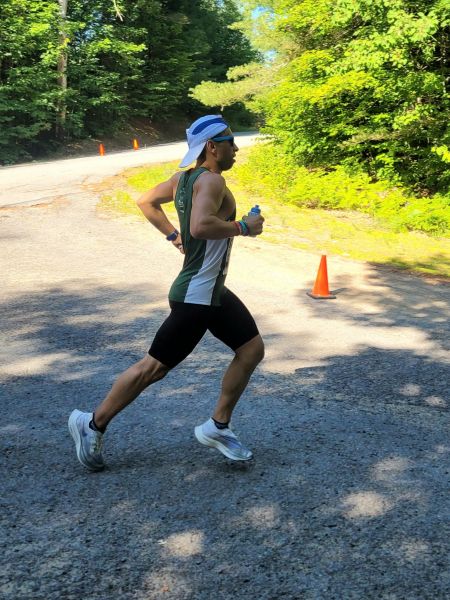 The one real section of a crowd cheering during the race was at the 7.5 mile mark. Around that point the course leveled out and even with the huge wave of self-doubt I had allowed to crash over me minutes beforehand, I still had the thought, "Well, let's just see how the rest goes." As nonchalant as that statement sounds, I have found it to be one of the most powerful axioms in all of running. The best description of the course is that it is basically the same experience twice in a row: you go down an enormous hill then miles and miles later you have to go back up that same enormous hill – and you do that twice in a row. This makes it the perfect course for people who both hate themselves and like to lie to themselves. After grinding through the end of the first half, groaning in misery, contemplating your life choices which led you to this point, thinking of all the things you could have been doing that morning which would make you infinitely less miserable, possibly crying, wanting to curl into a ball and die … you can start the second half of the race telling yourself, "Okay, so that wasn't so bad," which was exactly the lie I told myself.

In all seriousness though, the latter half of the race does give participants an opportunity to fully take in the natural splendor of the Dippikill Retreat. It is secluded and beautiful, with broad vistas of seemingly endless tree groves, with their branches splayed to the heavens praising the sky, and makes you feel that if you were not in a race this would be the perfect place to just stop and sit and do nothing at all but admire pure, unspoiled Mother Nature. The canopy of leaves allows in just enough sun for one to appreciate the rapture of the bright summer sunshine through the forest without wilting under its heat. I was reminded of the Japanese word "Komorebi." It does not have a direct English equivalent, but it roughly translates to the phenomenon of sunlight flickering through the trees, an altogether glorious scene. Then ... the soul-sucking final mile hits. But at that point you know you can do it. Because even the toughest race – even one specifically made to be hard as hell – has an ending and you're right there. And after complaining to myself and doubting and resigning myself to dropping out only to keep going all the way to that downright evil final hill, I did cross the finish line.

The Hard as Hell Half is not at all a "I'm going to run my personal best here" course; really the only way that would happen is if you had never previously run a half marathon, in which case I would advise NOT to choose this one as your first. If I was to answer in general though: is this race worth it? That would be an emphatic "YES." It is blast but it is miserable. It is epic but it is low-key. For much of it you might feel alone in nature and at other times strongly connected to a close-knit running community. Basically it is the Alanis Morrisette "One Hand in My Pocket" of races with all its contradictions. I spent long portions of the race cursing myself for ever signing up and after I crossed the finish line I could not be happier that I did. For what my humble opinion is worth, it receives the highest recommendation I can give a race. The only word of warning I would offer – and I cannot empathize this enough – is there's a reason it is NOT called the "Easy as Hell Half Marathon." 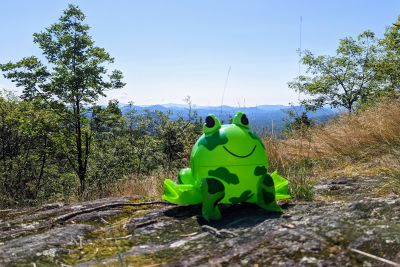 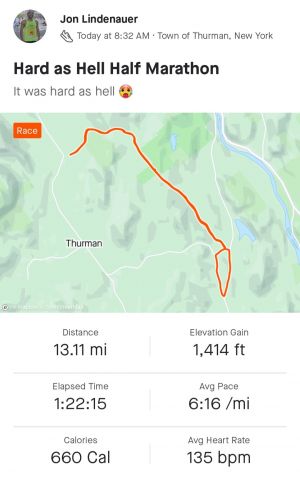 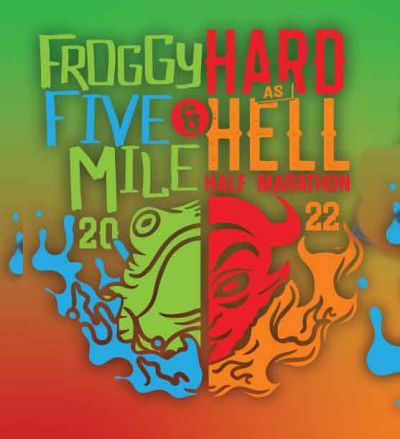