Running to the Edge: Book Review If you love to learn about the sport of running and enjoy a good read, then Matthew Futterman’s Running to the Edge is a safe bet. There are essentially four stories packed into the book’s 275 pages — Bob Larsen, the Jamul Toads, Meb Keflezighi, and the author (Matthew Futterman). Bob Larsen is perhaps the most important ingredient in the story because without him there would be nothing to read.

Larsen began coaching in 1961 at Grossmont College. If you are scratching your head, it’s important to explain that Grossmont College is a community college and the Griffins are now a defunct team. Although it may seem odd, it turns out Grossmont was the perfect stomping ground for Larsen to learn about the sport and perfect his methods. The area surrounding Grossmont had some of the best high school cross country and distance runners in the country at the time. One such school was Monte Vista High School. It was a victory for Larsen and the runners who were unable to leave the area to attend more reputable schools due to finances or grades. During Larsen’s time at Grossmont, he won seven state titles and coached distance runners to 11 national community college records. In many ways, the program Larsen ran at Grossmont was better than many big-name four-year schools — quite impressive! Click on picture for NY Times article on the book

At the same time, Larsen formed a running team called the Jamul Toads. This was, as the title explains, a band of misfits who were learning the skills of running. With Larsen’s guidance, the group learned how to push themselves to their limits at the right times and develop into racing machines. The Toads were also a formidable force under Larsen’s guidance, winning an AAU National Cross Country Championship in 1976. Larsen’s time at Grossmont and with the Toads occurred during the same time as the United States' tumultuous involvement in the Vietnam War. We learn that despite Larsen’s firm leadership, he cared a lot about his athletes. In more than one case we learn why an elite miler (a human version of a thoroughbred racehorse) may seem like the perfect military candidate but in actuality may be an injury disaster waiting to happen. The proclivity to run at or better than four minutes in the mile was also the cause of numerous stress fractures and bone/tendon issues that disqualified seemingly healthy men from serving in Vietnam.

Larsen’s success at Grossmont and with the Toads attracted attention. In 1979, Larsen took over the ULCA program. This was a step up, as UCLA during the 1980s and early 1990s would have some of the best runners in the world on its teams. The transition from Grossmont to UCLA forced Larsen to change his approach to coaching. At Grossmont, the distance runners were the show. At a large program like UCLA, where winning was what mattered, Larsen had to consider point earners and scholarship money. The biggest bang for your buck comes in sprint and field events where individuals can do multiple events. It’s not uncommon for top tier 100m and 200m runners to move up to the 400, compete in relays, and be able to long and triple jump to score points when needed. The grueling nature of distance running meant that Larsen had to be strategic with his choices. One runner Larsen took his chance on was Meb Keflezighi. By the time Meb makes his entrance into the book, Larsen’s work with UCLA was nearing an end. The book does a great service to the running community by discussing Meb’s path. Meb benefited from receiving a top education from UCLA. After finishing his education, his professional running career was met with the standard inertia seen by nearly any runner. The fact that even the best in the country can barely make enough to survive is glaringly obvious when you read about Meb trying to scrape by on what amounted to essentially a minimum wage living. Meb did not secure a six-figure salary until around 2004, when he won the silver medal in the Olympic Marathon. Calling out the fact that Meb was entering his 30s and surely would not race at this level for long, Meb’s sponsors made sure he would have to KEEP EARNING his livelihood even after he had already proven himself over and over again. For anyone who follows the sport, this type of treatment is infuriating, since in many other sports individuals with far less impressive resumes are guaranteed millions, and after “proving” themselves on the highest stages are set up as lifetime sponsors and sports ambassadors. But that is another story.

We follow Meb’s heartbreaking injuries from 2005 to 2009. During this time, he was on the brink, with no sponsor and only membership in the Central Park Track Club. It was 2009 when Meb won the NYC Marathon,  I still remember watching the event live. Even winning in NYC did not guarantee sponsorship, as Nike decided to drop Meb despite the victory. We learn of Meb’s training and subsequent deals with Skechers and other smaller companies (Elliptigo and UCann). Then, at age 39, what amounted to Meb’s potential raison d'etre came into his running life — a win at the Boston Marathon, in the year after the bombings, no less.

Finally, the book follows Matthew Futterman, who has connections with the Capital Region through his attendance at Union College. Futterman is a writer who wrote freelance for many years. The story takes side visits to Futterman’s life, considering those lonely runs along the Mohawk River and streets of Schenectady, the questions at events on why anyone would get up on a weekend to run instead of sleeping in, the use of running as a way to center oneself during times of stress and change, and the desire to push oneself through running the marathon. Futterman came up with the idea for the book when talking with Larsen. Futterman states that he wrote the book to find out why people run and the role people like Bob Larsen play in the endeavor, and notes that he is starting to find out why he runs. I think most of the people reading the book who enjoy running can relate to that. 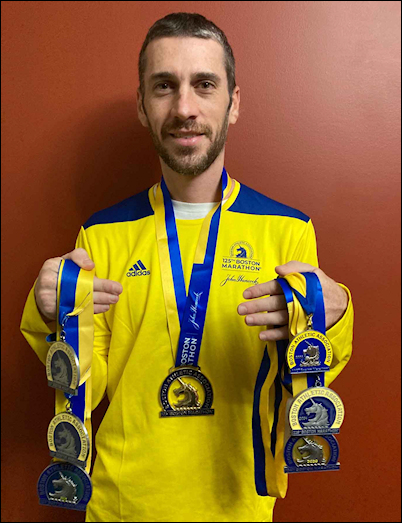 Tom O’Grady is more than an elite runner. He is a college professor with a joint appointment at NYSDOH/UAlbany School of Public Health, a coach, a writer, and a family man. In his spare time, whatever little that is, he writes for the Pace Setter and if you click on his picture, you can explore the wealth of articles he has written.