Finish Line: Syracuse Half, NYC Half and Ice Breaker 5K 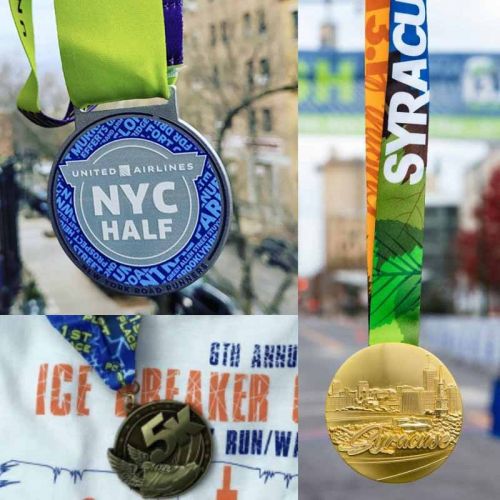 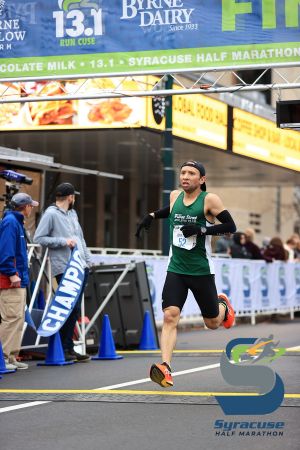 The race was deceptively hilly. There are 2 particularly tough hills, but it is mostly the cumulative effect of many gradual hills which made it difficult. I was hoping to do better time-wise but I spoke to Josh Merlis just before the race went off and I tempered my expectations accordingly. I had never run the race before, so I put a lot of stock in his insights. -a great comparison was the fact that the previous half marathon I ran was another half in Syracuse: the Lake Effect Half in February. I ran virtually the exact same time in this race, and it was a much tougher effort this time around. The final 5 miles of the race wound up being my 5 fastest miles, and I am not someone who usually races that well from a tactical perspective, so I think that just speaks to the nature of the course.  Overall, it is a very very fun race from a community/organizational perspective. It receives extensive local news coverage. There was indoor live music, a bunch of post-race freebies for the runners, including beer and tons of food. It has top notch competition. It is a big deal as far as upstate NY races are concerned. The only other races I can think of for upstate which have as much pageantry to go with them are the Utica Boilermaker and the Firecracker 4 Mile in Saratoga. I had it in my mind for a while that I would go out of my way to run it based on a fellow runner who said it was his all-time favorite road race, and now I can see why. 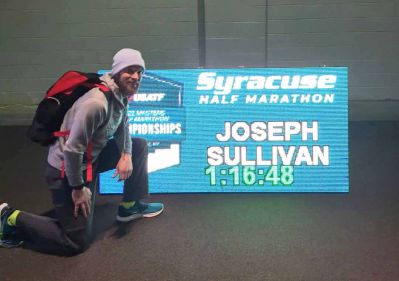 It was my first time on that course! My friend, who has run the race, was signing up for the open half marathon and asked if I was interested and I noticed that it was also marked as the USATF Masters half marathon championship. I checked in the Willow Street team info to see if we could field a team. We did, so we all signed up! I've been training for Boston and the half was a month out, so I thought it was perfect timing! Unfortunately, I got a cold on Tuesday and was concerned about performing at the half. I missed my running workouts on Tuesday through Friday but told myself that it was just a really thorough taper. Race day went unexpectedly well. The weather was cool and damp with some wind gusts. I kind of like those conditions. By mile 9 I was excited about the potential of a personal best time. I was grateful to accomplish it. What made the day even better was to have my teammates and a bunch of awesome local runners on the course representing our area in Syracuse. 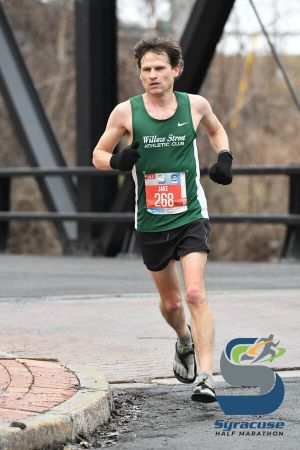 This was my first year running the Syracuse Half Marathon. I really enjoyed the race; it was very well organized. The race swag included a cool jacket that fits! The course included some great hills scattered throughout the 13.1 miles, enough to break things up and keep it interesting but nothing particularly heartbreaking. With a very early start before 8am it made sense to drive up the afternoon prior and stay overnight. I enjoyed visiting Syracuse for a few hours the evening before. Weather this time of year could go a lot of different ways, and the forecasters were having trouble dialing in what the weather would be like. They had been calling for a lot of wind and rain, but thankfully it ended up being comfortable, windy and cool weather with a bit of sprinkling rain. I even managed to sweat a little while running in just shorts and a sleeveless shirt and gloves. I knew going into it that I haven’t been training as much as I have in past seasons, so I wasn’t expecting to break any personal records. My goal was to set an appropriate pace and try not to crash before the finish line. I was hurting when I crossed the finish line, so I don’t think I had a lot more to give. I ran significantly negative splits which tells me I probably could have pushed a little more in the earlier miles, but I think it all evened out. 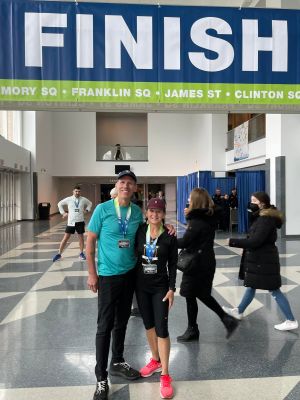 We car camped in the Catskills Friday and hiked the “Devil’s Path” 28.5 miles and 9,600 feet of elevation gain today, so I wasn’t able to get to this sooner.

Going to the Syracuse half marathon. It all started when we were invited to Friendsgiving with a group of our running friends. After a great dinner and a couple of drinks someone brought up the Syracuse half marathon in March. One person looked it up and immediately signed up for the race, heavy peer pressure ensued and next thing you know all of us had all signed up to run this half marathon. Thank goodness for the HMRRC winter series because that was an integral part of our training plan.

At that point before Thanksgiving there was no way we would have known that we were going to hike every weekend through the middle of March. So, between the winter series races; all of our hiking; and sprinkling in a few weekday runs here in there, we prepared for the race as best we could.

Neither Sue nor I had ever run this course before. Our group of nine rented two hotel rooms to share amongst us in downtown Syracuse. The next morning, we all headed out to the course. There was a threat of morning rain showers and cool temperatures. Turns out it did not rain during the race. I had heard that there was one long hill in the 1st mile and then the course was generally flat. However, it seemed to have a lot more hills than I thought it was going to have; they were small and rolling but hills nonetheless. I had my sights set on averaging 8 minute miles but started a little slow and finished with an 8 minute 2 second pace. Sue finished shortly after me with an 8 minute 12 second pace.

We had a great time and came in first and second amongst our nine person running group. Not sure if we will run this race again next year but it was fun to do in 2022. 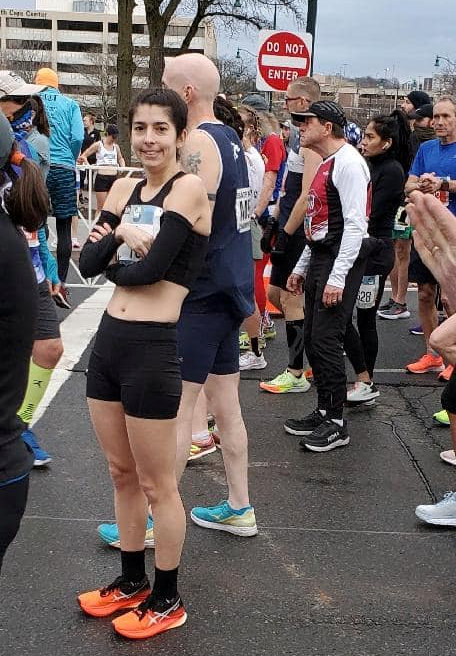 The race was very well organized. The whole course that ran through the city was completely closed to traffic. Weather was perfect temperature but pretty breezy. I actually was expecting a bit closer to a 1:23:30 based on my recent 10 miler at Albany so I'm happy with a PR but was hoping for more. I never ran this race before. I liked the early season timing and I have family in Syracuse, which made it more enjoyable. 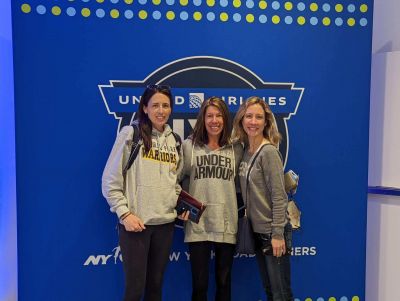 This year’s race didn’t disappoint!  On 3/19/2022, I traveled down to Park Slope, Brooklyn, with two running buddies, Meg and Rebecca.  We stayed at my cousin’s brownstone in Brooklyn, just a few blocks from the start, in Prospect Park.  We were able to warm-up running to the opposite side of the park (start area) and ended up passing a few elites, Galen Rupp, being one of them (yes, he took himself out of the race at mile three, not sure why).

We had perfect weather for our run from Brooklyn to Central Park.  It was a beautiful sunny day and about 50 degrees at the start.  In 2019, it was much colder and not as enjoyable. This course has so many sites - the Barclay Center and Times Square to name a couple!  The course gets tough as you approach the Manhattan Bridge and make that climb, but then it is pretty good until you hit the FDR (a straightaway that goes on forever it seems…)  You then head into Central Park to get the feel of the course and cross some hills before you see the FINISH!  There are also plenty of places to eat after exiting Central Park near Columbus Circle.  I cannot say enough about the volunteers and crowd support overall.  If you get a chance to run this race, I highly recommend it and make sure you do some hill work!!!

And speaking of small world and volunteers, who should we see at the end of the race but HMRRC’s own John Sestito volunteering as he had at the NYC Marathon. That added a wonderful touch of home to a city that bustles with a population of millions.

Meg Versteegen (pictured above with Alyssa and Rebecca)

Three years after my first go, I had the pleasure of running the United NYC Half on March 20th. A quick girls' trip down to the city set the stage for a super fun weekend. NYC knows just how to put on a smooth, well-run (pun intended!) event, despite the large field size and city logistics. Bib pickup was easy, and we all even managed to find our miniscule-font names on the participant wall just prior to exiting. The race start in Brooklyn's Prospect Park went off without a hitch, made even nicer by the clear fifty degree weather. En masse, we trundled up and over the East River, and then onto the FDR highway (spoiler alert: this is the most boring part of the course). Turning up 7th Ave, I got a boost seeing the kiddos running the opposite direction down the right side for their fun run. Winding around Central Park to the finish line made for a picturesque end, and I was so proud to don my shiny new medal. Definitely a great one to run - I love NY! 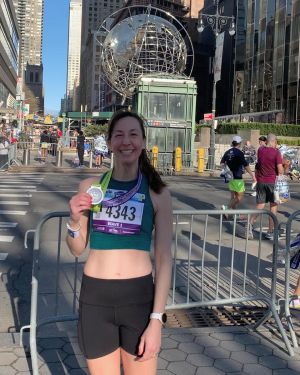 It was so fun to run the NYC Half today.  That said, it had been 1,099 days since the last NYC Half (cancelled in 2020 and 2021).  The weather was good, but a tad warm and sunny after training all winter Upstate.  I think it was about 55 degrees during the race.
I’ve run the half a bunch of times, but not since 2015 (they majorly changed the course in 2018 and now it starts in Brooklyn and ends in Manhattan).
There were no Covid restrictions but all runners had to show proof of vaccination to pick up their bib and run the race. Masking wasn’t required.   It was a fun day! I ran a 30 second PR! 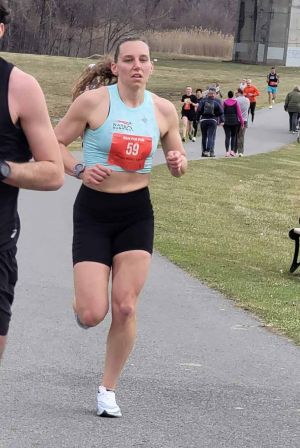 The last few months have been filled with great training runs and racing. I was excited and ready to race Ice Breaker. I knew I as well prepared and confident I would reach my goal of breaking 20 in the 5k, which I have only done one other time. I never thought I could get here again. Focus breeds more focus.

The first mile and half were easy sailing. The turnaround slowed me down, but not as much as I anticipated. The second mile and a half were slightly uphill and I felt it, but still felt strong. It was the last half mile where I felt I was ready to give up. I knew I was close to a PR and for sure getting my sub-20. The last half mile was filled with conversations in my head. I kept the pace fast and steady and ended with 19:54! Next up, crushing my PR of 19:43 from 2016. Also, I was able to nail a mini workout AFTER the 5k. 3x1 mile @ 7:20.