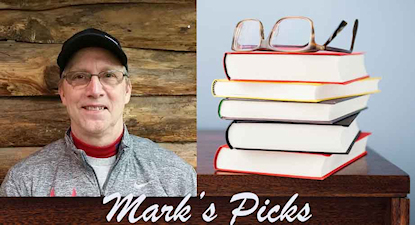 Summer isn't complete without an Elin Hilderbrand Nantucket beach novel. And once again this one doesn't disappoint! A little twist here as GOLDEN GIRL is "semi" autobiographical in the sense that it is about a summer beach novelist who lives on and writes about Nantucket. However, she is killed at the start of the story in a hit and run accident while jogging and she's up in Heaven trying to help her children get through it with gentle "nudges."  Also her 13th (and final!) novel just dropped and it's got a bombshell secret in it from her past that she hopes doesn't get out! Read it (probably in one setting!) to follow all the excitement.

Lies....betrayals...broken promises....and a forbidden past that looms over everyone. False Witness has it all and more. Slaughter delivers once again in this stand-alone novel. Rich Atlanta defense attorney Leigh Colton has it made...a promising career and a great family but it is suddenly to fall apart. As she is handed the dream case which could put her over the top, defending Andrew Tenant, a wealthy client accused of multiple cases of rape, a terror grips her when she meets him. It's no coincidence he has asked for her. He knows her dirty little secret. Leigh used to babysit for him when she was twelve and handed the job off to her little sister Callie when she got older. Back then he was called Trevor Waleski and his creepy dad, Buddy, committed sexual assaults against Leigh and Callie...and they took out their revenge. Can Leigh defend the man she knows is not only guilty but willing to spill the beans about her if she doesn't obey his every request? Can Callie and Leigh's husband Walter stop the impending doom? Check it out!

First in the series of the Ellery Hathaway/ FBI agent Reed Markham series. Markham saved then 14-year-old Ellery (Abby) fourteen years ago from a serial killer. Now she's grown up and solving crimes of her own. And she needs his help again finding a copycat! I've read Book #4 in the series also, now I just need to read the middle two. Great suspense. Good intrigue. Give it a try.

The Last Thing He Told Me by Laura Dave

Not my usual cup of tea...but I couldn't put this one down! Hannah is recently married to Owen, a man she thought she knew. But when he disappears one day and leaves her to care for his 16-year-old daughter, Bailey, she doesn't know what to do. Bailey hardly talks to her because she lost her mom in a car accident and doesn't want her dad to replace her. Hannah too lost her mom, who abandoned her at an early age. But when the FBI and the U.S. Marshalls show up to interrogate her, she knows she must act quickly and in Bailey's best interests as well. They go on a trip to Austin TX (they live in Northern California) to check out the roots of dear old dad. What they find is not only disturbing, but potentially very dangerous and Hannah must make sure she does the right thing. This novel has been optioned to be a major movie!