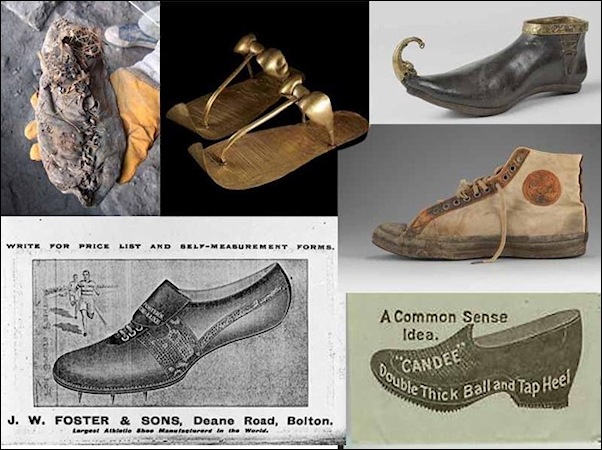 Prehistoric humans needed foot coverings in certain climates and regions. As necessity is the mother of invention, shoes were born. Being made of materials that easily deteriorated, the earliest shoes are not known. Interestingly, cave paintings give no clues to shoes, as the cave painters drew detailed pictures of animals they hunted, but few of humans, who were drawn as crude stick figures. The first shoes discovered, dating back 13,000 years, were sandals in Fort Rock Cave in Oregon. 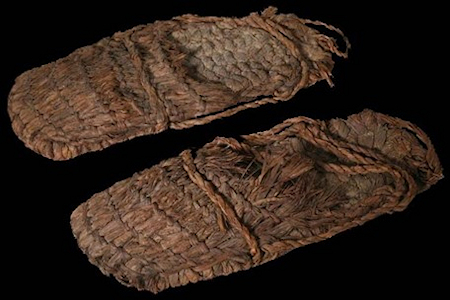 The first known leather shoe, 5,500 years old, was found in Armenia in a cave in astonishingly good condition, preserved by sheep dung and the dryness of the cave.

Oldest leather  shoe, found in Armenia in a cave

In 1991, a 5,300-year-old mummy was found in a glacier in the Otztal Alps and nicknamed Otzi. His shoes contained different types of leather that had laces, were lined with moss, and had an attached corrugated sole (maybe like Nike’s famed waffle shoe). Modern recreations of the shoe have been made and it was found that they were effective in navigating mountainous regions and keeping the wearer’s feet warm even in the coldest temperatures. 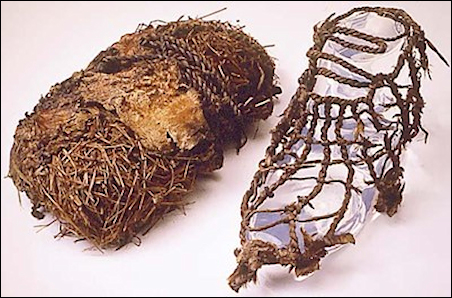 Shoes that are 5,300 years old from a mummy found in a glacier

Sandals were worn by the aristocracy in Egypt, with some made of gold and others papyrus, but in the tomb paintings, most people depicted are barefoot. The early Greeks wore sandals for ceremonial purposes but in general went barefoot even in the Olympic Games. However, only free citizens were allowed to wear sandals. 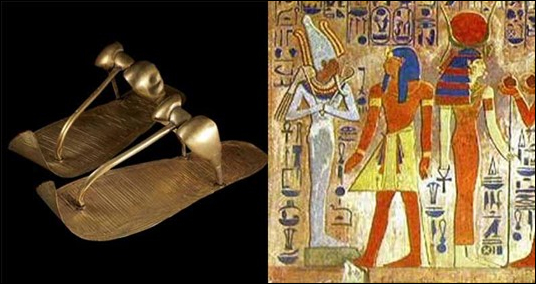 The Romans mainly went barefoot unless in battle, or in the provinces where shoes were protective. However, the aristocrats wore ornate shoes as a sign of wealth.

During the Middle Ages in Europe, the heel became a prominent part of shoes, worn at first only by men. In warmer climes, espadrilles were popular, and in colder areas, leather boots that were turned inside out and sewn up with the shoe sole making a seamless structure, thus protecting and strengthening the shoe.

However, practicality in footwear gradually was replaced by wild fashions of the rich who did not have to worry about dirtying their feet with work, or seemingly exercise. First came pointy shoes called poulaines, some of which were so long they needed to be tied at the knee so the wearer wouldn’t trip over them.

Next came platform shoes called chopines worn by women during the Renaissance. Some platforms were so high the wearer had to have people hold their hands so they wouldn’t fall. 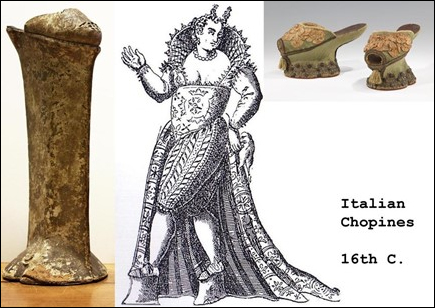 Not to be outdone, men began to wear high heels that in the case of Louis XIV’s court had to be red like the Laboutine shoes of today. The phrase well heeled came from these early shoes that were only worn by the rich. 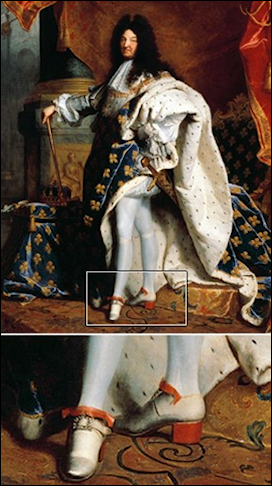 Louis the XIV of France, the Sun King 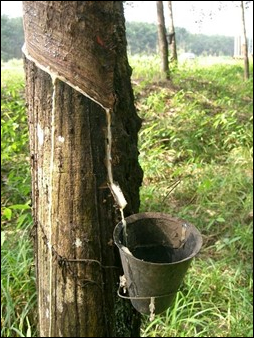 However, at the same time in the wilds of the Amazonian rainforest and throughout Mesoamerica, shoes were made from a miraculous substance tapped from trees that we call rubber. It was used by the Mesoamericans to make balls, shoes, boots, containers, and waterproof textiles. Their cities had ball courts built into them that were important recreation and ceremonial centers for the populace. In the 1700s, European explorers brought rubber products back from the Amazon Basin, amazing people with rubber’s versatility, but as time went on, it was realized that the rubber items, which seemed miraculous, melted in the summer and cracked in the winter. The Amazonians for centuries knew how to process the substance to prevent this, but the Europeans did not until Charles Goodyear discovered the procedure known as vulcanization in 1844, and this led to a revolution in shoe making that is still taking place today.

The first use of rubber in shoes was in 1830 in shoes called Plimsolls that were used by the affluent for beachwear, yachting, water sports, tennis (the “sport of kings”) and to play croquet. A rubber sole was attached to canvas or other materials. With advances in producing this type of shoe, it became available to the masses, so much so that a pair of sneakers could be purchased for 50 cents or less. 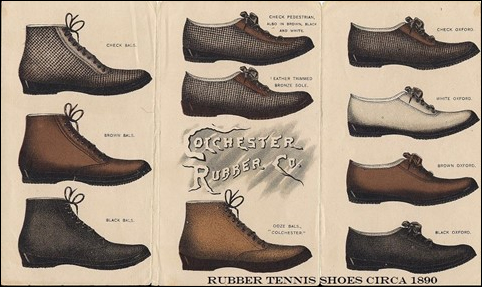 The rubber running shoes called sneakers, because of their silence when walking, proliferated wildly during the 1800s. Factory and business owners became concerned with how their workers should spend their leisure time positively. If they engaged in sports, it would make them healthier employees and would keep them “off the streets.” The YMCA (Young Men’s Christian Association) was formed to offer people of all incomes a place to exercise while encouraging ethical behavior through Bible study. In addition, public parks that offered natural landscapes within a crowded city area grew during this time. Central Park in New York City is a product of this movement. 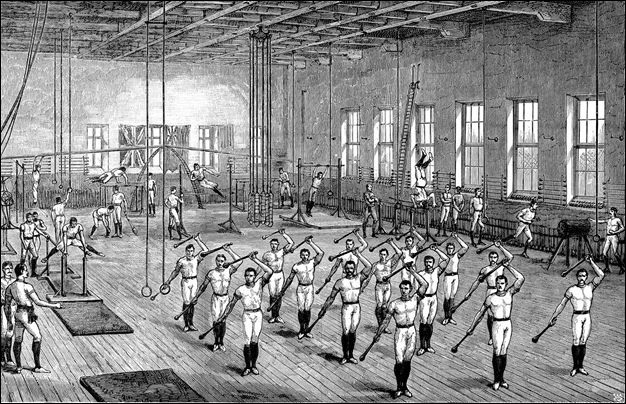 The British company J.W. Foster and Sons is credited with designing the first running shoes in 1895 that had spikes in their rubber bottom for maneuverability and speed. Foster’s company made shoes for the 1924 Summer Olympics British track team. Harold Abrahams and Eric Liddell (made famous in the film, “Chariots of Fire”) ran the 100 m and 400 m events wearing Foster's running gear. Video of Eric Liddell in the 1924 Olympics . 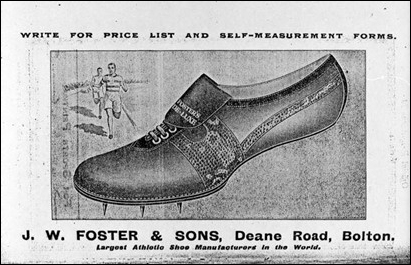 In America, the production of sneaker type shoes continued apace. The first company to produce rubber bottomed shoes was the Candee Rubber Company.

In 1892, the U.S. Rubber Company produced the now famous Keds, whose name is a combination of the words kid and the Latin root for foot: ped. Interestingly at this time all sneakers were made by rubber companies. 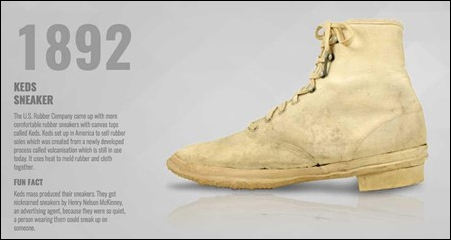 Another groundbreaking shoe was the Converse All Stars introduced in 1917 by the Converse Rubber Shoe Company for basketball. It is the first shoe to start the time-honored marketing ploy of being sponsored by an athlete. Basketball star and coach Chuck Taylor was hired to promote them, and today they are still called Chucks In his honor. 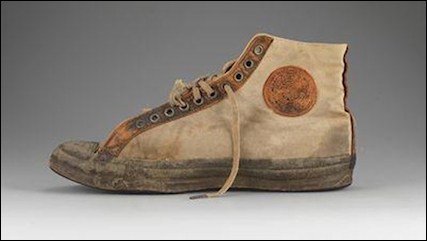 The 1936 Summer Olympics in Berlin, Germany, is most famous for Adolf Hitler refusing to give Jesse Owens, the four gold medals that he had won, because of the color of his skin. It is also important for introducing different running shoe companies to the global market, especially those started by the Dassler brothers, Adi and Rudi. Adi who later formed Adidas (the brand name is a combination of his first and last name), made special custom fitted spike shoes for Jesse Owens that he wore in events where he won gold, adding to Owens’ glory and that of Dassler’s shoe company. 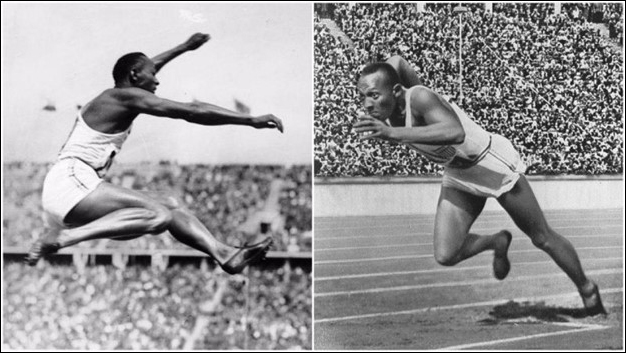 From the 1930s on, running shoe brands became more numerous and specialized. To explore this phenomenon further, you can check out these books and sites to learn how running shoes became ubiquitous.