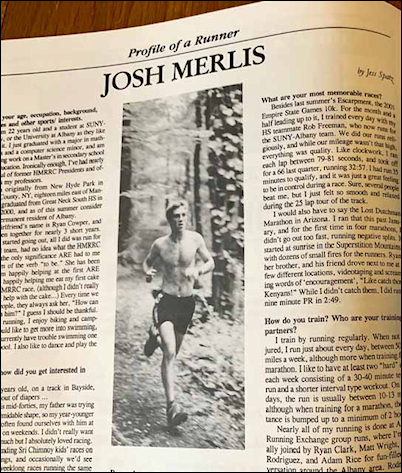 State your age, occupation, background, hobbies and other sports/interests

I am 22 years old and a student at SUNY-Albany or the University at Albany as they like to call it. I just graduated with a major in mathematics and a computer science minor and am beginning work on a Master’s degree in secondary school math education. Ironically enough, I’ve had nearly a handful of former HMRRC Presidents and officers as my professors.

I am originally from New Hyde Park in Nassau County, NY, 18 miles east of Manhattan. I graduated from Great Neck South HS in June of 2000, and as of this summer consider myself a permanent resident of Albany…

Besides running, I enjoy biking and camping and would like to get more into swimming, although I currently have trouble swimming one length of a pool. I also like to dance and play the piano.

When and how did you get interested in running?

At three years old, on a track in Bayside Queens just out of diapers…

Nearing his mid-forties, my father was trying to return to formidable shape, so my year younger brother and I often found ourselves with him at the local track on weekends. I didn’t really want to run all that much but I absolutely loved racing. We started attending Sri Chinmoy kids’ races on Sunday mornings and occasionally we’d see people in the weeklong races running the same mile loop over and over.

When I was six, I ran my first 5k race in 26:25, I was dubbed the “runner” by my fellow three and a half feet tall friends, although by most standards I was simply a weekend warrior. Nonetheless, I enjoyed the challenge of longer races and at eleven, I experienced my first wall in the Long Island Half Marathon. My first marathon was in Philadelphia, November 2002.

I first became what I would call a runner in 7th grade when my friend Jon Soleanicov and I tried something new: training. We ran nearly every day together the following summer, and I’ve been running ever since, unfortunately, he moved to Illinois the following year, but we do see each other about once a year.

Do you have a favorite race?

My favorite races would definitely have to be the trail ones. In particular, the Mudders and Grunters 5 Miler in Yorktown Heights, NY; Muddy Sneaker 20k (near Rochester); Nipmuck Trail Marathon (Ashford, Ct); and the Escarpment Trail Run.

Perhaps I like them so much because of the inherent challenge - at my first Escarpment Trail Run in 2003, I grossly underestimated the difficulty of the race and went from cocky and brash at the start to barely finishing. It was a humbling experience as I went from running in the top 10 to walking the last 8+ miles and being passed by everyone while my body writhed, there was some sick, masochistic enjoyment in being so depleted but so determined to do nothing more than finish.

What are your most memorable races?

Besides last summer’s Escarpment, the 2001 Empire Sate Games 10k. For the month and a half leading up to it I trained every day with my HS teammate Rob Freeman, who now runs for the SUNY-Albany team. We did our runs religiously, and while our mileage wasn’t that high, everything was quality. Like clockwork I ran each lap between 9-81 seconds and took off for a 66 last quarter, running 32:57. I had run 35 minutes to qualify, and it was just a great feeling to be in control during a race. Sure, several people beat me, but I just felt so smooth and relaxed during the 25 lap tour of the track.

I would also have to say the Lost Dutchman Marathon in Arizona. I ran that this past January, and for the first time in four marathons, I didn’t go out too fast, running negative splits. It started at sunrise in the Superstition Mountains, with dozens of small fires for the runners. Some friends drove next to me at a few different locations, videotaping and screaming words of “encouragement,” “Like catch those Kenyans.” While I didn’t catch them, I did run a nine minute PR in 2:49 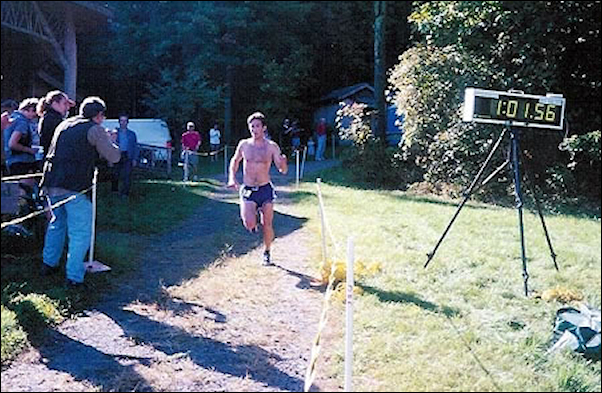 How do you train? Who are your training partners?

I train by running regularly. When not injured, I run just about every day, between 50-60 miles a week, although more when training for a marathon. I like to have at least two “hard” days each week consisting of a 30-40 minute tempo run and a shorter interval type workout. On Sundays, the run is usually between 10-13 miles, although when training for a marathon, the distance is bumped up to a minimum of 2 hours.

Nearly all of my running is done at Albany Running Exchange group runs, where I’m usually joined by Ryan Clark, Matt Wright, Jaime Rodriguez, Adam Rice for fun filled conversation around the Albany area. Rodriguez, Rice, and I were all teammates for the school team a few years back, so it’s fun to be running together again through the same trails and roads we meet each other on.

What are your current goals?

To stay consistent and healthy. This past March, after several months of ignoring deep pain in my right shin, I finally got an MRI which revealed a stress fracture. It didn’t come as a surprise, but If so long as I didn’t know what it was, then I could write it off as the shin splints that just wouldn’t go away. I was also running more consistently than I ever have before, and losing one’s conditioning is never something a runner wants

I hope to return to where I was last July: injury-free. As far as more concrete goals, I hope to recoup my loss to Adam Rice at the Stockade-athon. I also hope, through both the HMRRC and ARE, to create new events around the area; not just your typical 5k, but zany events that would make Paul Rosenberg happy.

Do you have a philosophy of running?

Running is both the most difficult and rewarding activity a person can engage in. Likewise, I find that if someone can get out and push his or herself on a run, fighting through the immense physical stress and fatigue that runners know all too well, then it should be easy take on the more passive challenges we confront in our daily lives. I believe it makes people stronger physically as well as mentally, and I also feel contrary to what most non-runners say, running is the only sport that everyone is capable of doing, provided they have the desire and self-discipline to be consistent.

My sophomore year of high school I was in a new cross country race at a local college. It was well organized except for one problem: a little before the second mile, the lead biker turned to me and asked, “Do you know where to go?” Truth be told, I had no idea, but the biker still said “I’ll follow you,” and, of course, off we went in the wrong direction. About 15 minutes later we stumbled upon the finish line, as runners were coming in from all directions. What course management!

My sophomore year of college, I ran cross country for SUNY at the IC4A championships at Franklin Park in Boston. I passed my teammate (Ian French’s) mother, Shirneen. She was a favorite of the team because she came to nearly every meet no matter where it was, and she was commonly referred as Momma French. I was quite fatigued at this point, so as I passed her, all I was able to spout off was “Hi, Mom…” before having to gasp for more air. As I would later find out, the woman next to Shirneen said to her, “How sweet of your son to say hello to you while racing!” To which she replied, “And the best part is, he isn’t even my son!”

This ad was directly below Josh’s interview. Oh, how times have changed!! 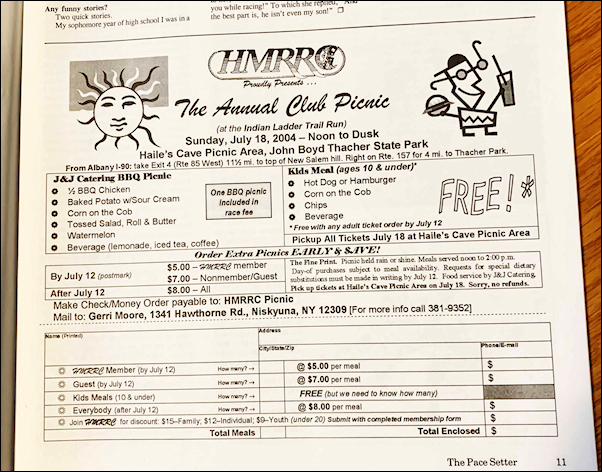