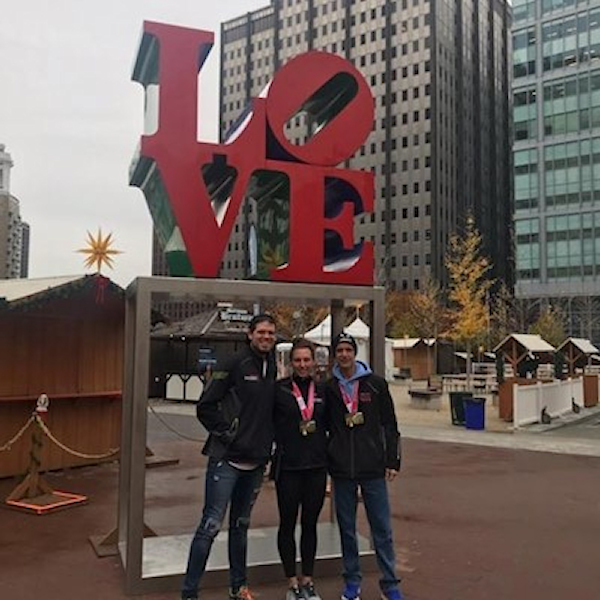 Philadelphia has a higher chance of being cold for race day, plus it’s a really fun event. For me, it was an easy choice to pick Philly. Training started mid August, but actually GMP didn’t start until later in the cycle. After Providence in May, I tweaked my diet and ate smarter. The weight easily came off and running became easier, even in the humidity.

I was getting too fit too fast and was going to peak before Philly. I wasn’t sure what GMP would be but when it was time, I trained between 7:30 and 7:36; and that felt easy. I was able to maintain my strength training 3 times a week and continued to get stronger while I was getting faster.

I arrived at Philly confident I was going to get a PR, but anything could happen on race day. The first few miles were conservative. I enjoyed the easy miles while sightseeing through the city. With the plan that was given, I attacked the hills slowly then picked it up on the flats and downhills. I was patiently waiting for mile 20 so I could take off. I could see the turn around and was hungry for more. As soon as I turned around I took off.

The last 6 miles I looked down at my watch, 7:15-7:10, I never felt this good this far in the marathon before. I knew I got the PR (I had a little celebration in my head). I knew every second counted.  I found my focus again. I threw myself forward and focused on the finish. I was in pain, I was sprinting but when I crossed the finish, it was all worth it. This came from smart training and a smart race day plan. Michelle went to Philly with her friend Travis Carr and noted HMRRC runner, John Sestito.  This is what he added:

My road to Philadelphia Marathon was kind of all over the place. It was a great marathon in a great city I enjoyed the whole weekend with Michelle &Travis! But I was originally supposed to be running marine Corps marathon on Halloween but when that got cancelled Michelle suggested running Philly.  I am so glad I did.

My training was going well averaging about 50 plus miles a week including long runs and speed work. Then I was volunteering at Freihofers 5k and twisted my ankle unloading water from the trailer. Most unfortunately,  it was a bad sprain, so that put a damper on training. I couldn’t run for 3 to 4 weeks. But it all worked out in end and I was able to run the Marathon not totally pain free but bearable.   I am used to that being an older runner!