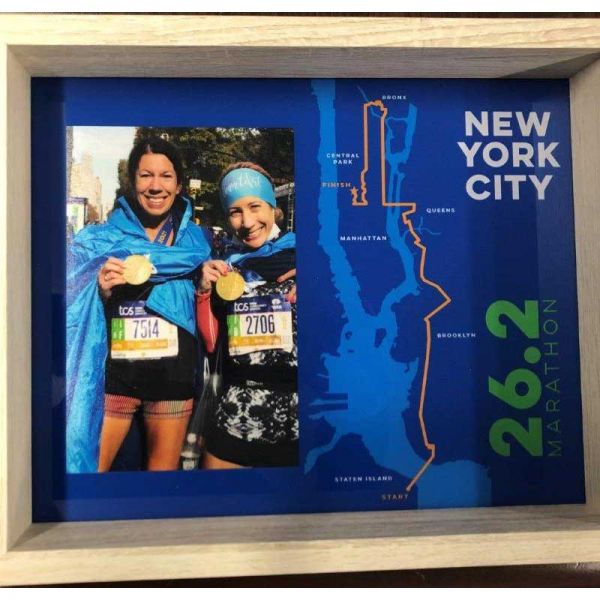 Start spreadin’ the news, I’m leavin’ today
I want to be a part of it, New York, New York

…and we were off! As with many events, the NYC Marathon had been postponed in 2020, and due to scheduling changes, it meant that Alyssa Risko and I were running the NYC Marathon just 5 short weeks after running the London Marathon in our Six-Star World Marathon Majors journey.*** While Alyssa had already run NYC twice, I had never had the chance. I needed my NYC star! Being the amazing friend she is, Alyssa agreed to run with me for fun, and so here we were with our freebie pink and orange Dunkin’ hats in place, trotting over the Verrazano-Narrows Bridge from Staten Island into Brooklyn.

It was a beautiful clear day, partly cloudy with no rain and starting temperatures in the mid- to upper forties. We had successfully navigated the 5:45 a.m. Staten Island ferry (thank you, daylight savings time!) and the bus ride to the athlete’s village in Ft. Wadsworth. Bundled up in our fashionable throw-away clothes and garbage bags, we huddled together under a heat sheet and fueled up on our peanut butter bagels and rapidly cooling Dunkin’ coffee. 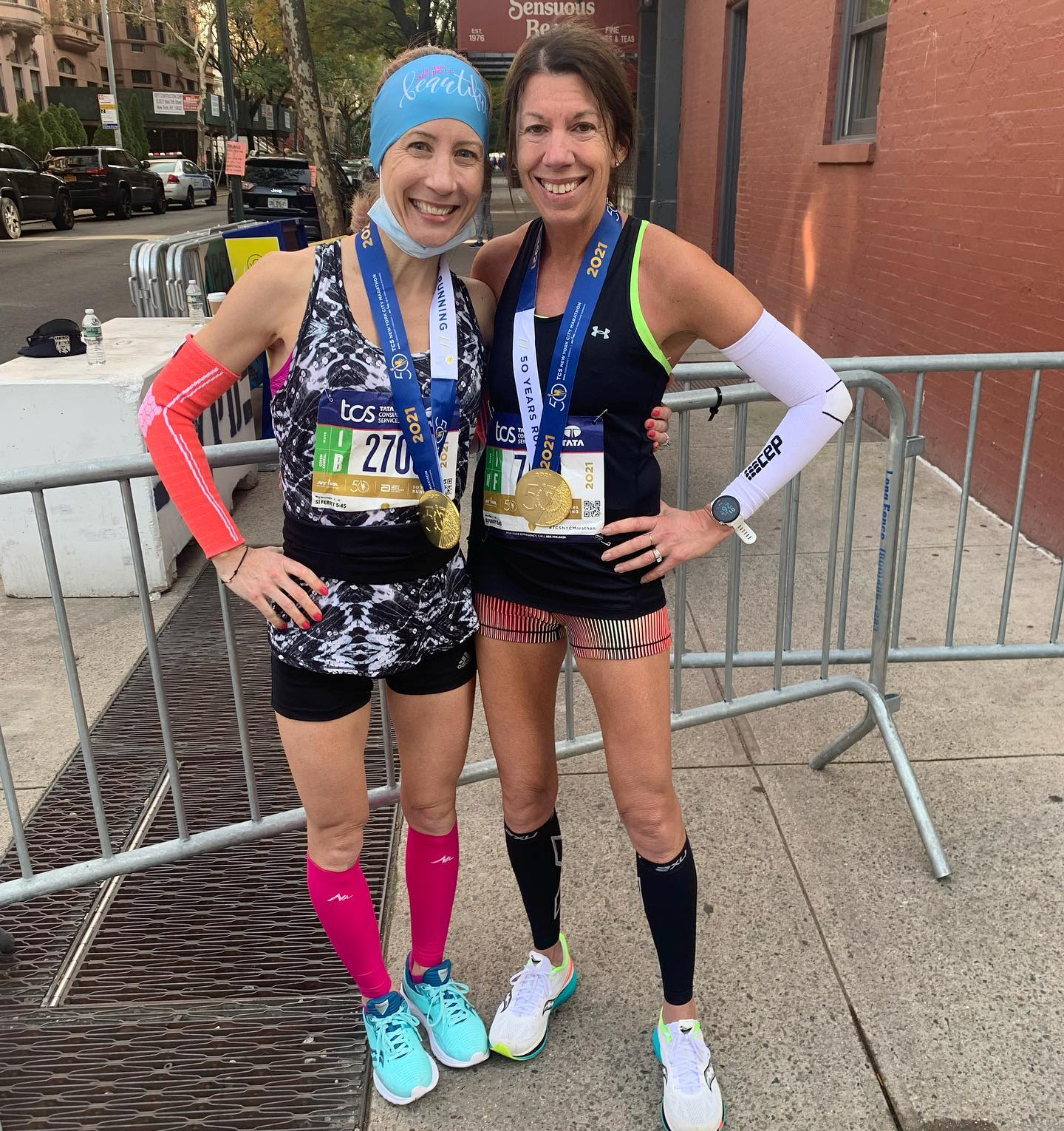 We both had run upwards of 10 marathons apiece, but never before had we run two so close together. Shalane Flanagan’s concern about ‘imploding’ when she ran her back-to-back Chicago and Boston Marathons in October kept bubbling up in my mind. Alyssa and I had run hard in London, and I really wasn’t sure how we would handle NYC. We agreed upon our race goals: Goal A was to finish (I needed my NYC star!), Goal B was to finish under four hours, and Goal C was to finish with a smile on our faces. No pressure! This was a race for the experience in this six-star journey, and I was excited.

Our first mile was on the lower level of the Verrazano-Narrows Bridge, which cut down on our sight-seeing ability. I also never saw a mile marker, so I just had to trust my watch. I knew we wanted a nice easy warm-up start, so no worries. As with many large races, my watch became more and more ‘off’ from the later mile markers, and due to the tall buildings and later bridges, the connection wasn’t terrific. I largely stopped looking at my watch and just tried to soak it all in. I pretty much never run with my phone, but had decided I should in this case so that I could capture some selfies with any/all of the celebrity runners. Never mind that I never saw a single one, or that I’m terrible at actually taking a decent shot while running! 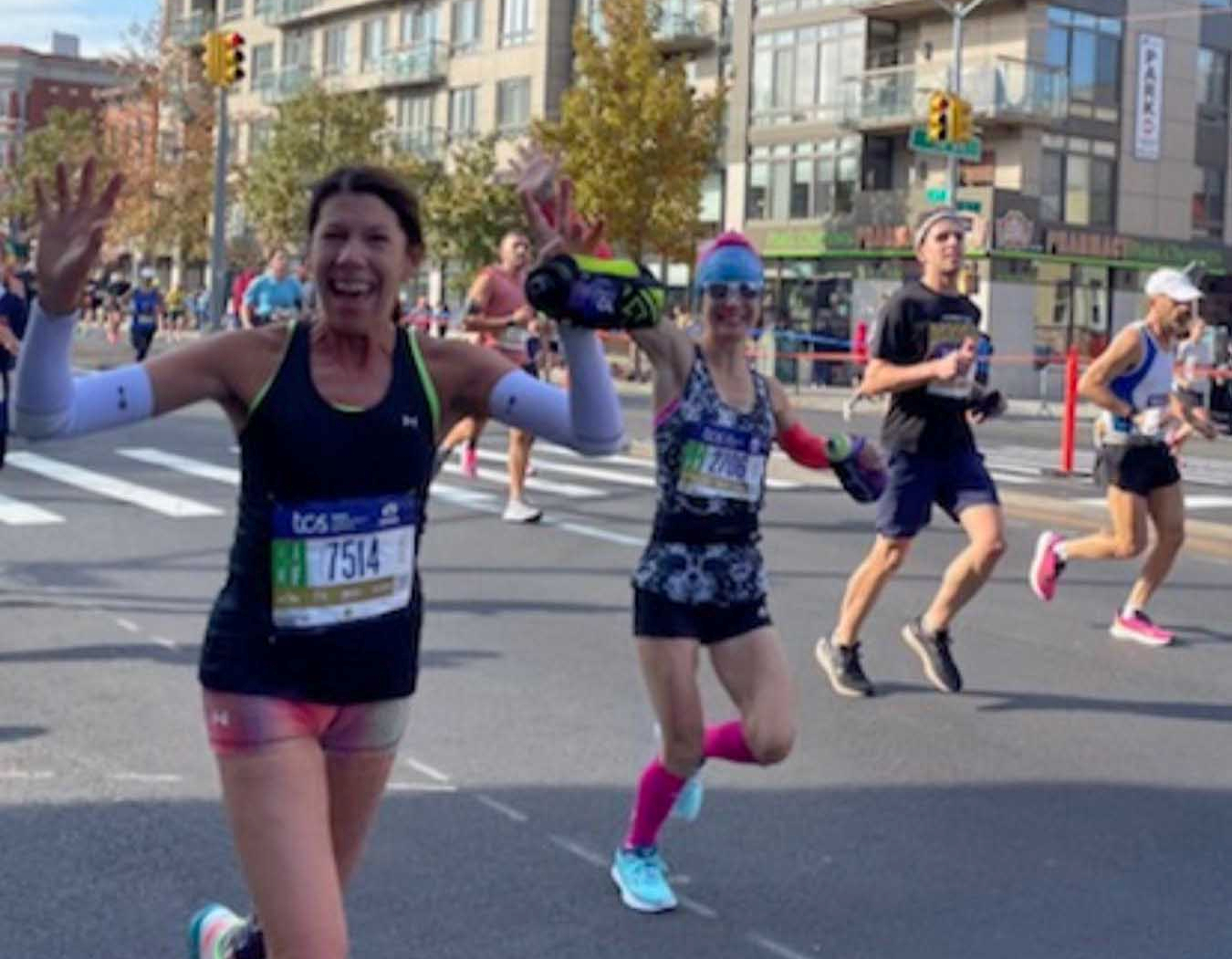 I heard the NYC Marathon referred to as one big block party, and it did not disappoint. It spreads across the five boroughs, with deep pockets of cheering crowds, various bands, confetti, dancers, pom-poms, and numerous DJ tables. The energy is infectious. Thumping bass from dance music can really pump you up, although attempts to dance along with it were less than successful. If you’ve never tried dancing while running, try it – it’s really hard! One of my favorite areas was The Bronx, complete with its ‘Entertainment Zone’. This is around miles 19-20, and it just hit me how incredible it is to have all these people who don’t know you out there cheering and pointing and encouraging all of us crazy runners. Pretty sure I’ll have to bring pom-poms to the next race I cheer at – it truly gives a boost!

The final 6 miles run through Manhattan, entering Central Park around mile 24 with a big welcoming sign. These last couple of miles are fairly packed with people, and you feel buoyed by their exuberance and vitality. It’s hard not to smile and get carried along with the momentum around Columbus Circle, and then back into Central Park for the last mileage. Marathon finish lines are a beautiful thing, and when those big arches came into view it was pure joy. Having ignored my watch, I had no idea until Alyssa exclaimed about our time that we had run a 3:38, her second fastest marathon ever! Tired and happy, we collected our NYC medals which depicted the 50th anniversary of the event. So grateful for these opportunities (and that super-cozy NYC finishers poncho)!

If I can make it there
I’m gonna make it anywhere
It’s up to you, New York, New York! 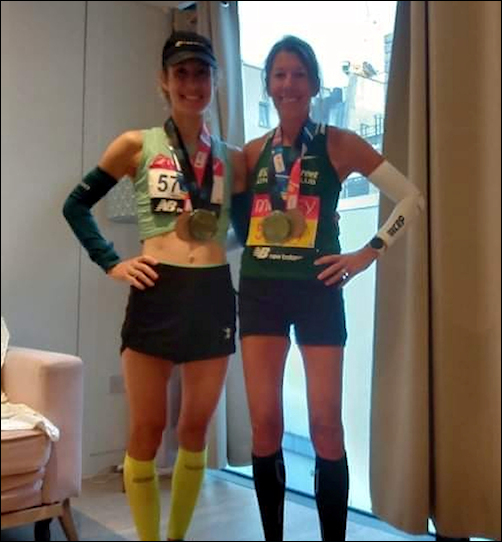