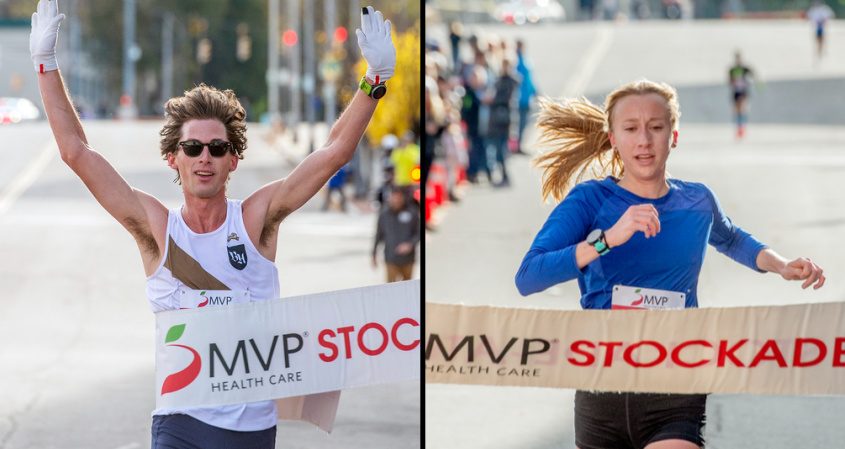 Mike MacAdam wrote this about the winners:
As former Section II distance stars, each brought a sense of familiarity to the results, anyway, but, remarkably, they also essentially re-created previous Stockade-athon performances, as well. In fact, the 24-year-old Sherman posted the exact same time (54:24) she ran while winning the race in 2019, and the 30-year-old Serafini barely missed, running 45:28, a scant five seconds slower than his winning time in 2016.

To read more about them and their background, click here for MacAdam’s full, wonderful article.

The Stockade-athon is one of the crown jewels in the races that HMRRC annually presents as it is one of the largest and oldest 15K races in the country.  Its running was more meaningful this year as last year’s was cancelled because of the pandemic.  Racers were hungry to compete again as you can tell by their comments below about Stockade-athon 2021.

It felt so good to get out on the streets of Schenectady again with the Stockade-athon. This race really showcases all the beautiful places this city has to offer. It is such a huge race and made the Electric City come alive after a year of not being able to compete. This race reignited my love for this sport all over again! Running the Stockade-athon is like a person on Christmas morning. I was so excited to run the streets I run on everyday with a thousand other runners. I grew up and live in Schenectady so running down the middle of state street was so much fun. I had great conversations with people on the course and said hi to spectators on the sidelines. It was nice to see more people than ever in the Stockade. Overall, the day was perfect.

Stockade-athon is a great race with a lot of history. I enjoy the new course with the uphill climb in the first half of the race and the fast 5K downhill to finish. 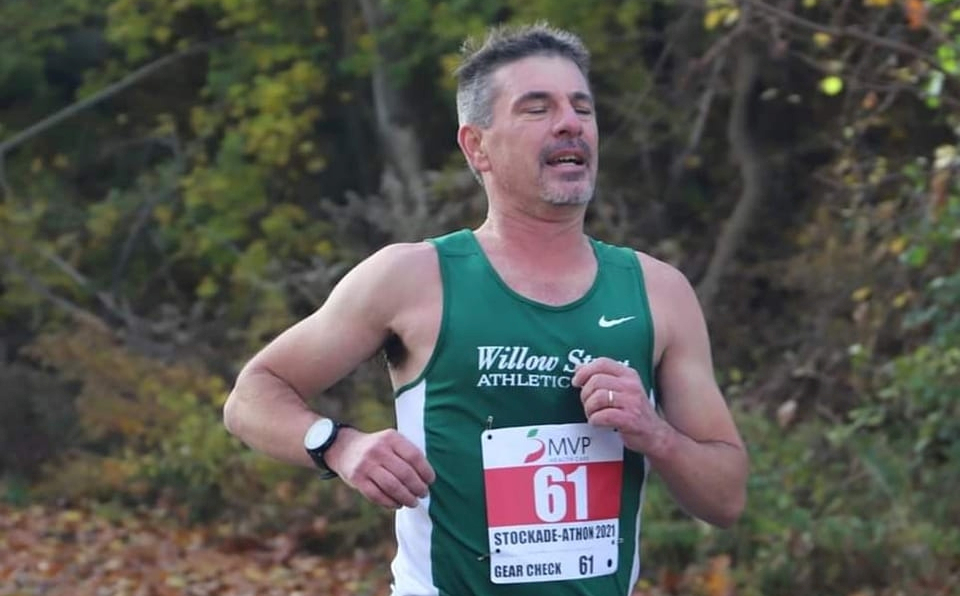 The return to the Stockade-athon felt great. It felt like a sense of normalcy returning to a race that I must have run close to 20 times in my life. It was great to have water in actual cups out on the course as I tend to take in a moderate amount of water in races and do not enjoy running carrying my own water. It was great to get out there with my teammates and compete. I ended up running most of the race with a few of my fellow Willow Street members. They helped pull me along to my best age-graded time of the year! 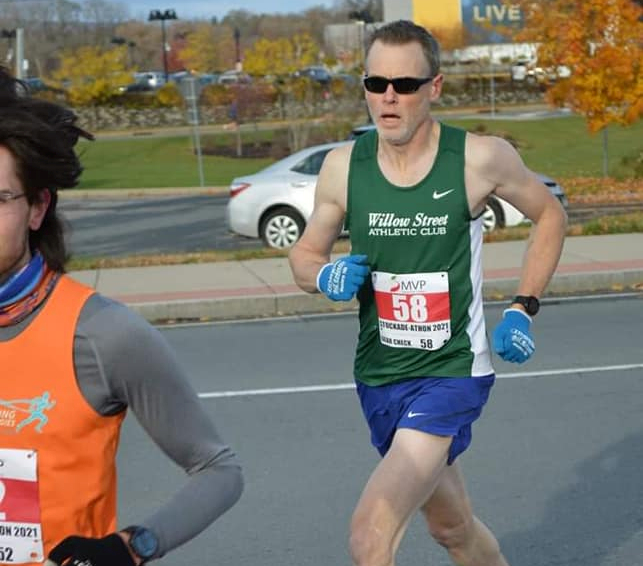 The Stockade-athon is my favorite race of the year. I just love everything about it -- the course, the cool fall weather, the whole vibe of the event.  It's the perfect fall race, on a challenging and fun course, and with a screaming downhill finish.

While the 2021 race lacked the crowds of some previous years, it was great to see the race return after a one year pandemic-inspired hiatus.  Although I didn't exactly have the race I thought I was capable of running, at age 50 I felt satisfied with my 57:22 finish time and slight negative split in each 5k. Now if they would only get back to handing out those coveted STK 15K SUB 60 stickers...

Here you go – And the stage was set for an outstanding 2021 Stockadathon. The air was crisp, the sky was blue, the sun was shining and over 1,025 runners were ready to be in person again for this capital region favorite. The course starts at almost an elevation loss, winding through the historic Stockade section of Schenectady. However, make no mistake, sooner rather than later, everyone’s breathing gets a little heavier and you are tackling some of the inclines. I always find the banter between runners interesting during a race – from their jobs to their children, to their families and everything in between. Because of the pandemic I am certain many of us have not had a chance to see each other in person.

Out on the course there were a lot of High Fives and Hey How Are You Doing heard throughout. AND how about those volunteers and police officers who keep us safe and hydrated throughout these events. We could not organize and compete in these races without them.

One of my favorite spots in the race is to run in Central Park. The trees were in majestic colors of yellow and red. Many times, I run and I am not always conscious of the environment around me; I have been trying to be more mindful of that so I can experience it all and always be grateful that I am out here able to run.

As you near the finish line and start your pilgrimage through the Vale Cemetery, you can already start to hear the crowd cheering and the runners being announced as they cross. Your climbing is over and now the reward starts. It is just about downhill to the finish. You try and put it in another gear as best you can, and better your time just a little, from the last time you ran this course.

At this point there is nothing to save or hold back for, your work is done. You start heading down that last hill and everyone is out there cheering for you, the runners ahead of you and the runners behind you. It is so very exhilarating to cross that finish line and know that you did it….but more importantly, in spite of the pandemic, we all did it together. Thank you for keeping us all safe, thank you to HMRRC for always bringing everyone home and thank you to MVP for being the major sponsor. Cheers to being out there again in 2022!!

The return of the Stockade-athon in 2021 really made me appreciate and cherish how special fall racing is in the Capital Region.   I ran my first Stockade-athon in 2017 and have returned to the course each year until the 2020 pandemic hiatus. Being in the weather business, I always remember the chilly low temperatures at the start of this race. I remember a few starts being in the upper teens and lower 20s.  This year’s Stockade-athon definitely felt different.  We had gorgeous weather with temperatures above freezing prior to the race start. The energy of the race was amplified by fellow runners, amazing volunteers and very supportive spectators.  As I was running through the beginning of Central Park, I could not help but think how much I missed this race in 2020.  Missing this race in 2020 really made me appreciate where we are today and how lucky we are to have these race venues in the Capital District.  With the return of traditional fall races like the Hudson Mohawk Marathon, Hannaford Half Marathon, and the Stockade-athon, our running community is coming back stronger, making fall racing all the more special.

So, obviously by my pictures, I was quite happy to be back, for many reasons. First, I have a fierce love for Willow Street Runners. I missed the team and the positive energy they bring. I could race near home, but these individuals are special to me. They are incredibly strong women, that I will travel 3 hours one way to run a race. I've done this for 13 years. Second, before COVID, I had a serious health issue, where my joints in my hands and feet were attacked. Then COVID. It forced all of us to slow down and put energy into staying safe and healthy. Willow did a few Zoom calls, which was wonderful. It was 2 1/2 years since I laced up and raced with them. We did Freihofer's last month, then I came up for Stockade-athon 15k (which is my very favorite distance). It was the first race where Emily Bryans introduced me to Willow. It felt fitting to come up and do that same race. There is such a kindred spirit that comes with these Willow members, including the men. I felt like it was Christmas and I was seeing all my favorite presents, but people I dearly missed.  It's also a race that I've volunteered with the fellow Willow members, especially the kids race. The day was perfect, but it wasn't just the weather, race, but everyone that made it happen. 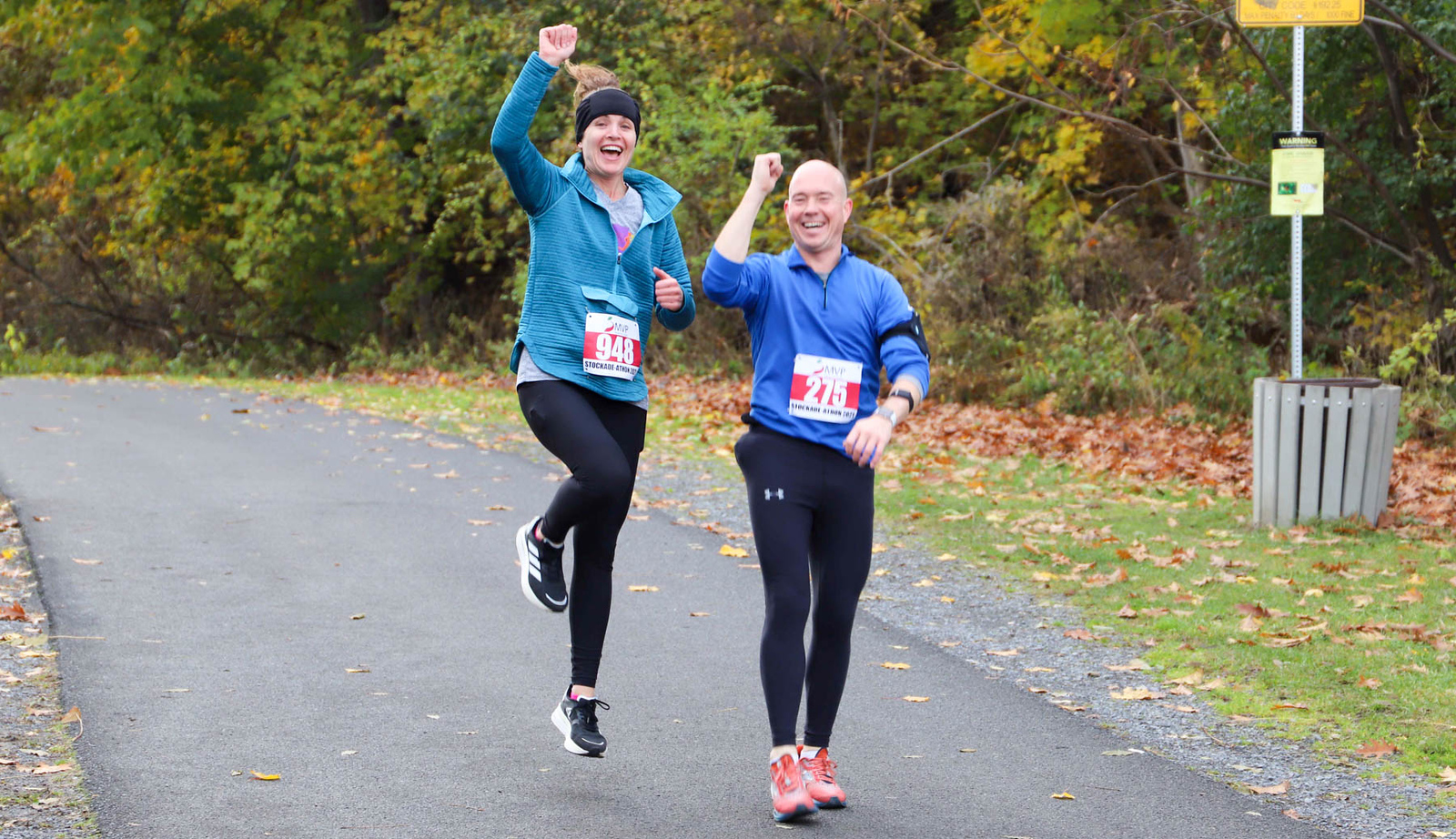 See you next year in November!