A perfect ending is the one which leaves you wishing for more… and that is what we got at Garnet Hill 5K. Temperatures were February cold, with an 11 degree send-off, ski trails were perfectly groomed, with just the right amount of give, and the abundant single track was a fun, challenging ride. Step off the trails at your own peril and risk sinking into 4 feet of snow. Makes you wish winter could last forever.

Many newer members were there, as well as old standbys from Eddie Albiozek’s original group – the Northans, Maureen Roberts, the Sheehans, Jeff Clark the Younger. The only weird thing is that there were twice as many female as male finishers. Is this a new trend? Or were the guys simply transitioning to the roads in hopes of a fast St. Patrick’s Day time? 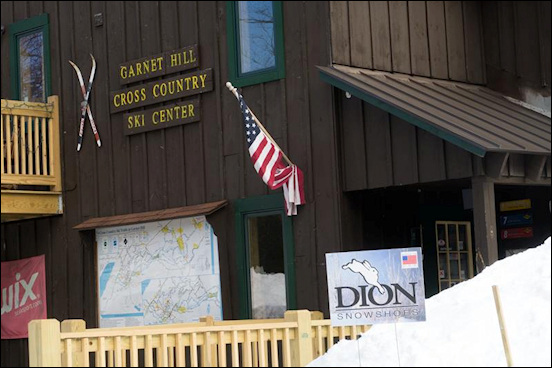 The trails were once more expertly marked by Bob Underwood of Underdog Race Timing. Intimately familiar with the system with over 50K of trails. Bob presents us with a slightly different adventure each year. This time, he added about 1/3 mile to the single track, utilizing the wider ski trails more as transition areas—at the start for early race distancing, midway through the trails to give our legs a bit of a break, and at the end for a fast finish. It was a skillfully crafted mix, catering to our various strengths and weaknesses.

The highlight for me were the skinny twisting trails, perfectly made for Dion snowshoes.  This single-track could be compared to narrow gauge railways, often utilized in mountainous terrain where tighter curves are a necessity. At times, it did appear that the single-track was truly single, with a slim foothold, barely containing one snowshoe at a time. Lose your balance and you were destined to plunge one-footed into the awaiting deep snow bordering the tenuous path. While it is fun to let yourself go on a downhill plunge, this turned out to be risky behavior, and the multiple sharp curves were difficult to handle while balancing on one foot and trying desperately not to sink 12 or more inches into someone else’s misstep.  It was here that the phrase “coming and going” took on new meaning…