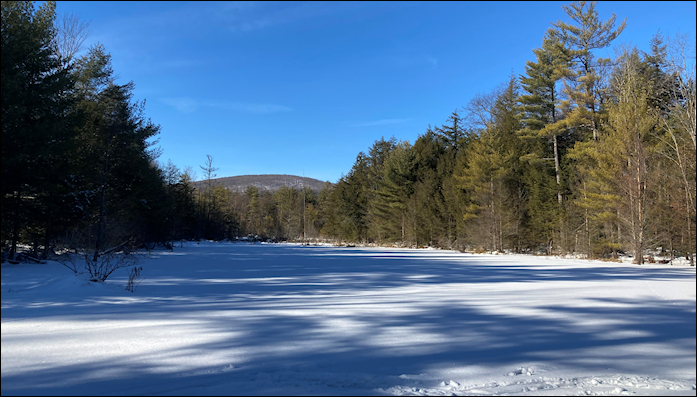 With Vermont and Massachusetts virtually shut down this winter and favorite locations such as Mt. Greylock, Readsboro (Hoot, Toot & Whistle), and Vermont’s Prospect Mountain off limits, we have had to confine our Dion Snowshoe Series to New York State, leaving noticeable breaks in our previously crowded weekend schedule. Enter Bob Underwood of www.underdogtiming.com and Rebecca Sewell, Recreation Administrator for the Town of Greenfield, who combined forces to bring us not one, but two snowshoe races to fill in the gaps.

Reminiscent of Tim Van Orden’s multiple races at Prospect Mountain, Brookhaven is one of those magical Brigadoon areas where snow flies early and lingers well beyond normal expectations. Schedule a race at Brookhaven and you are pretty much guaranteed that it will be a “go.” Unlike Prospect, however, Brookhaven is — a golf course. Yes, I know. While we have all enjoyed skiing or snowshoeing on the wide-open spaces of the typical golf course, it is more a place of convenience and not where you generally head to experience the solitude of the backcountry woods. The Brookhaven trails, a mix of towering pines and stately hardwoods, reminded me simultaneously of the Black Forest in Germany and the Viking Nordic Center in Londonderry, Vermont. Granted, there were no big mountains, but there were plenty of typical XC ups and downs. For beginners, a perfect introduction to the sport, and for the more experienced, an opportunity to clock a fast time on trails meticulously groomed by Steve Schreiber, a Town of Greenfield volunteer.

Both events offered a 2.5 and 5K option. The first, coming as it did at the beginning of break week, attracted several families as well as our regulars. It seemed as if the kids and their dogs ran the full mileage just fooling around prior to the start. Darryl Caron, recovering from ankle surgery, and his puggie (pug/beagle mix) Daisy, hiked Brookhaven #2 and Daisy garnered the award for most steps per minute with a rapid turnover achieved by only highly focused athletes. 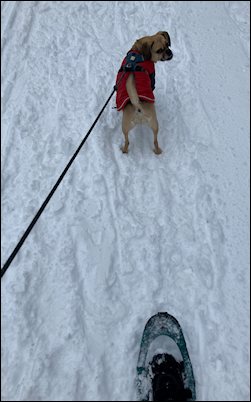 This was one of those races where you are almost at the finish, and can even see it, until the route winds back once more in the opposite direction. Usually when this happens it is toward the end and fairly easy to deal with, but this time, the turn back occurred perhaps two-thirds into the race, so I spent the final portion of #1 wondering if I had somehow gone wrong. I was much calmer when this happened during #2 and was even able to deal with that rough final uphill before the finish, which begins before you can even see the finish. Amazingly enough, my time for #1 was the same as my time for #2, which was run in rougher conditions. Except that I had run the 15K Frigus in Moreau the day before, so that might have had something to do with it. But perhaps not.

With few races this year and even fewer handouts, the Town of Greenfield generously provided long-sleeved T-shirts for both events. It was a caring gesture, appreciative of the athletes who signed up, and are sure to show up again on their own to explore the nine-mile trail system. 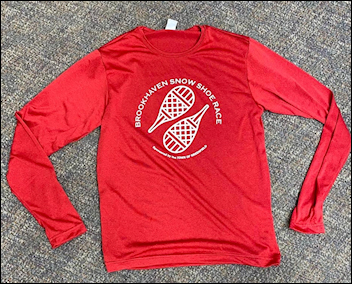