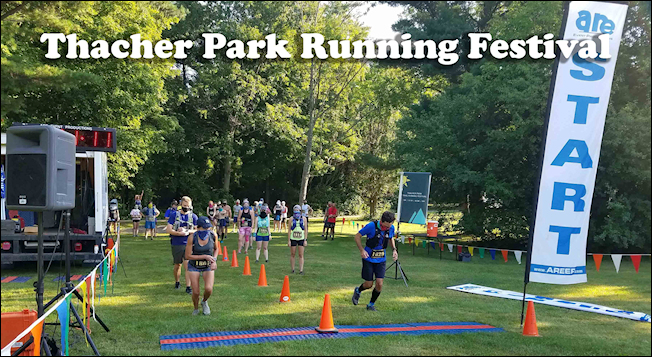 Once upon a time, I lived in Germany where fests were a year-round way of life. Each town and small village had their own rendition, complete with parades, floats, beer tents, wurst and a Volksmarch, or people’s walk. Usual distances were a choice of 10K and 20K, and an occasional 42K, with unique souvenir-quality medals. Most folks walked, but some ran. My children loved going because kids were awarded the highest gold medal even if they did the shorter distance, beating out their parents. Every Thursday we would scan the local paper and select our event depending on which medal we liked best. It was a great way to get off the beaten path and explore the local towns and countryside and, of course, the mandatory playground! 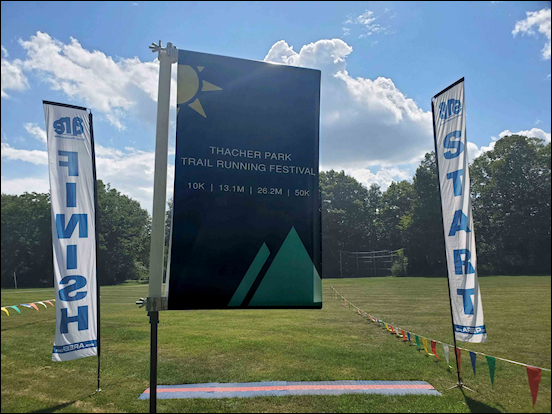 While the Thacher Park Trail Running Festival did feature its customary 10K, half marathon, full marathon and 50K, everything else was constrained. There were no kids’ games, no zipline and no potluck meals, or no family gatherings due to COVID. In fact, there were only 50 total runners allowed with hangers-on strongly discouraged. There were about 10 marathoners and 50K hopefuls, with a few of those dropping down in distance due to the 90-degree temperatures. Even in a shady woods, 90 degrees is still pretty darn hot. Everyone who lined up at the start line that day realized just how lucky they were to grab one of these coveted slots for a tour of all that Thacher Park has to offer. 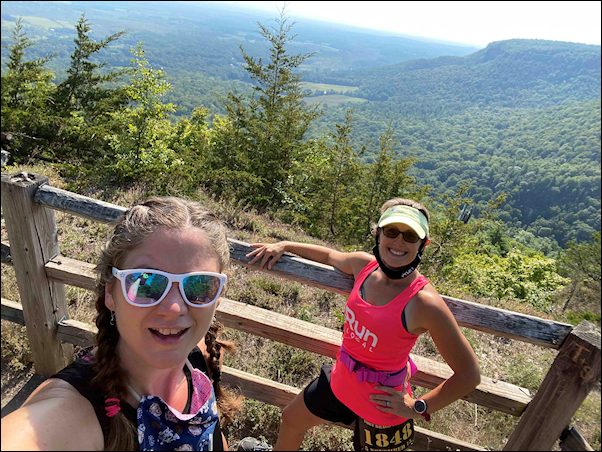 Naturally, everyone’s favorite trail was alongside the narrow Helderberg limestone escarpment, with its panoramic views of the Adirondacks, Catskills, Taconics, Berkshires and Green Mountains. And this time, with less crowd pressure, we could stop and take in the view without risk of getting run over. My least favorite section is that which leads to the final bridge and the trek down the asphalt road. For some reason, this area is always dark and gloomy, with a maze of tricky roots to work through, just when your legs feel in need of a break. However, on this day, the bright sunlight managed to work its way through the dense canopy, lifting my spirits despite the increased heat.Reduced crowds meant most of us ran significant portions alone, with the opportunity to pretend we were a famous runner leading the pack. Even with multiple loops on the menu, there was little occasion to pass someone. Water stations became much-anticipated events. For beyond the fact that they offered a brief respite, there was also the opportunity to connect, however briefly, with a real live person. The volunteers took the place of all those friends and family members who could only virtually cheer us on. 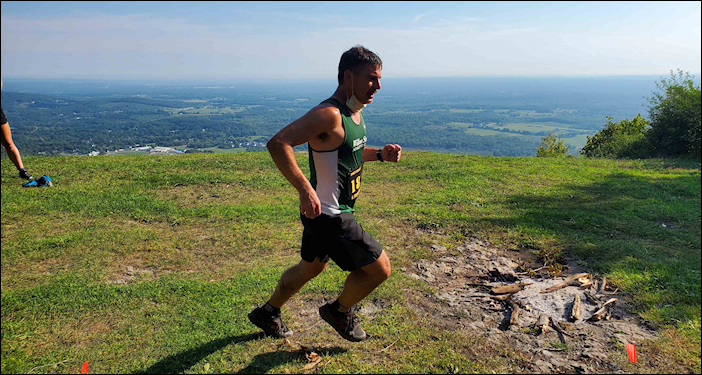 To eliminate bottlenecks and minimize touchy-feely encounters, these stops offered water only, without the usual trick or treat snacks. And while we could leave our personalized goodies at the seven-mile mark, few did take advantage. I carried my usual assortment of snacks: Hammer Gels, Cliff Shot Bloks and peanut butter cheese crackers, thinking that would be fine. But I discovered how much I really looked forward to those refreshment table goodies. Way before the race was done, I grew bored of my selections and craved the excitement of something new and different.

One thing that remained the same and will most likely continue way past COVID was that we were once again supplied from the never-ending surplus of Ft. Bragg 10 Miler bibs. This attempt to recycle is laudable, but I was thinking for the marathoners and 50K runners who might be tempted to frame their race bib, a truth-in-advertising representation might be appreciated. Still, there are always sticky notes to amend the situation. And just like at Dodge the Deer, we all received our choice of hero sandwich from Bountiful Bread—a fitting reward, with its melt-in-your-mouth bread. Mine did not last the trip home. 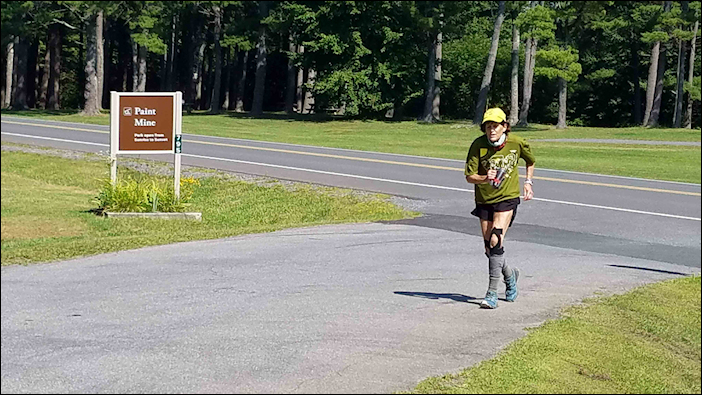 The author sprinting in Half Marathon

There were times, though, when I felt like less of a hero. While there was no hard and fast marathon cutoff, the course remained open for six hours and thirty minutes. As early as third grade, I was an arithmetic failure: I simply could not do our daily Mental Math. Only in geometry, which involved diagrams, and algebra, which involved basic single digit numbers, did I demonstrate a degree of competence. Try doing mental math after running a few hours. Could I make the invisible cutoff and still complete the final loop on time? And more telling, did I even want to? Doubt in my mathematical calculations and my ability to push on through 90-degree heat, eventually dissolved when I realized the situation was hopeless. Then I could relax and enjoy myself once more, taking from the day what was possible. In the end, I did feel like a hero for having done the best that I could hope for on one particularly tough day. 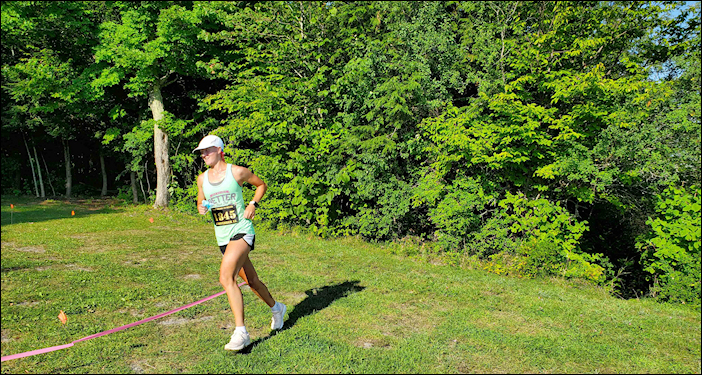 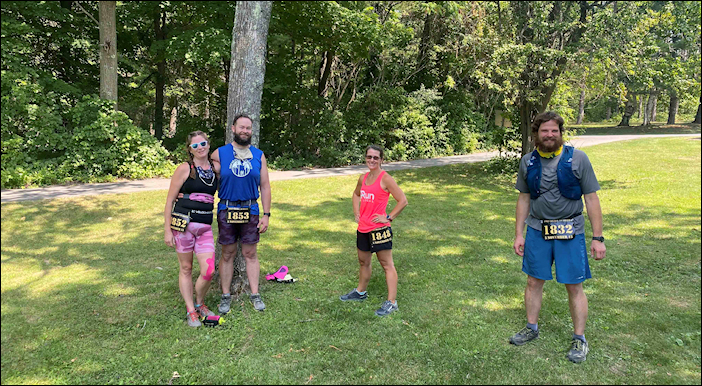 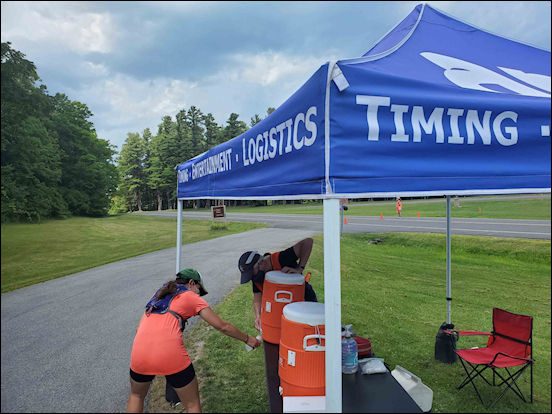 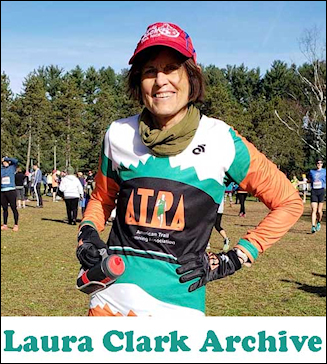 Froggy Five Miler: Fractured Fairy Tales Part II
Behind the Mask: A Life Lived Virtually
Wherein Dodge the Deer Pulls up Stakes Yet Again and Bravely Encounters the Trophy of
Death: Or ... The Grass is Always Greener on the Other Side
Tough Mudder Comes to Indian Ladder