The Joys of Urban Trail Running 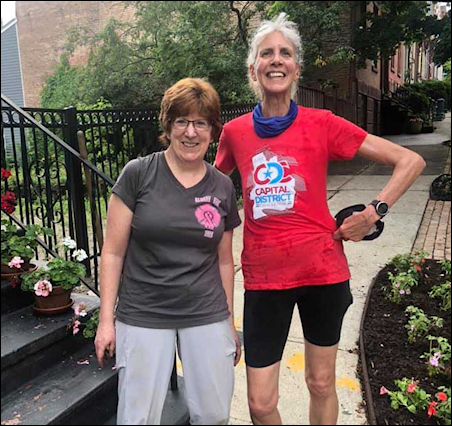 I love to breeze through the trees, but I hate to hop in a car to get to them. For me, a major running motivator is the ability to start right out the front door—yet my front door happens to be one block from the New York State Capitol.

So, I do my trail running in the city. Think of it as an old-growth forest with especially colorful trees and underbrush, along with the usual squirrels. And even the occasional bear.

This also solves my major running de-motivator: boredom. When the repetitive motion wears thin, the visual variety on city streets keeps me going. I never run out of interesting trails in Albany—I can shift over one block and open up a whole new landscape.

Here’s some of the joys I find in urban trail running, as well as a few ideas for doing it productively.

Architectural tourism. Albany has a wondrous inventory of buildings from three centuries of construction. Especially in fall and winter, I find that my S.A.D. wanes as my eyes fill with the visual stimulation of cornices, friezes, lunettes, oriels, brackets, corbels, and other furbelows. This isn’t just a personal quirk, there’s science here. Research subjects’ mood and brain arousal rose when they walked past bric-a-brac, according to a BBC.com article, “The hidden ways architecture affects how you feel.” 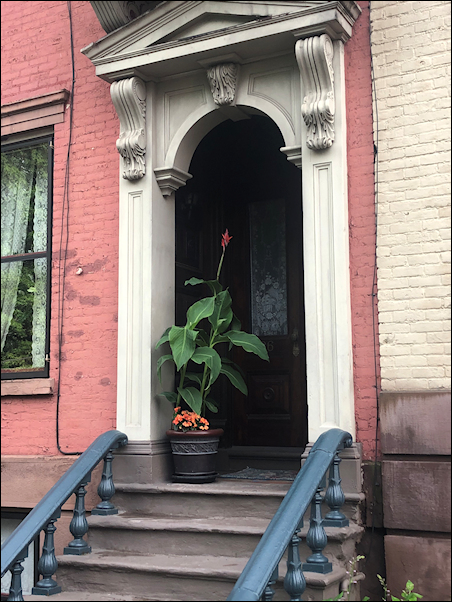 Garden gawking. As a shade-beleaguered grower, I find it instructive to see which flowering plants succeed in north-facing yards and porches. I find it envy-generating to see the splendid blooms and fruits that grow in sunny plots. My horticultural exploration sometimes turns agricultural, but on the advice of counsel I won’t mention that those bitter little ornamental crabapples can be stuffed in pockets and taken home to combine with honey for a tasty confit that goes nicely with pork loin. 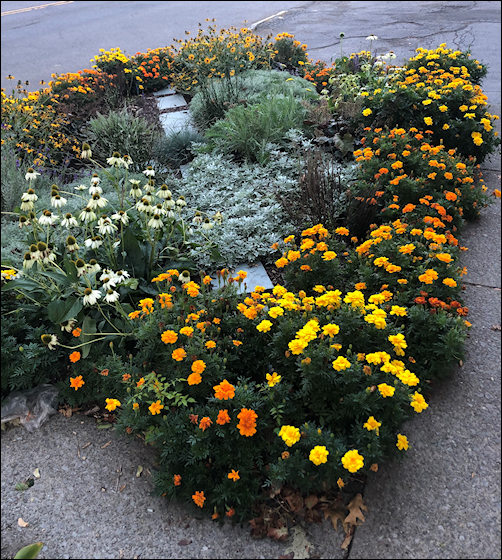 Not all hellstrips are hellacious, though
one shouldn’t run through this plot on Western Ave., either.

Hew to the hellstrip. The unholy zone between curb and sidewalk benefits the body. According to Runners World¸ grass is easier on the legs in terms of impact, yet it actually makes your muscles work hard to build strength. “If you can find a flat, even stretch of it, grass is the best training surface for most runners, especially as you get older.”

Hellstrip drills. What “flat, even stretch” of grass?!?Hellstrips often host tangled weeds and hidden hollows that are a recipe for face-plants. So, I prance: practicing my ChiRunning technique, peeling up my heels, pretending I’m pedaling a bicycle.

Sneak onto pavement. It’s not as good as grass, but asphalt beats concrete, which Runners World says is 10 times harder. On one-way streets, with care and alertness (and glow strips on my arms at dusk), I sometimes run against traffic on the pavement. Hey, that’s what country runners do, right?

Get off my lawn! This is something I have not heard from my neighbors, perhaps because they’d be yelling it at a (not so) little old lady in tennis shoes. When the hellstrip gets too hellacious, I do sneak over to the inside of the sidewalk, but I try to remain discreet. I’m entirely bold, though, when running on the many institutional lawns in my neighborhood—these nonprofits get breaks that boost my property tax, so I figure I’m paying for their terrain.

Pedestrian respect. I do my best to avoid walkers in Covid-times, but in case I can’t, I pull up the gaiter (a.k.a. buff) I wear around my neck. No runner can suck in enough oxygen through a mask, but I can go half a block in my polyester knit, which I admit is only slightly more concealing than a negligee. Still, there’s enough science to suggest that even this modest barrier limits my ability to infect others, may protect me a bit from others, and certainly won’t hurt. At the very least, it’s a gesture of respect for other humans’ health.

Park track. When I want to make a trail run a training session, the circuit around the Lincoln Park playing fields is a flat half-mile that offers a choice of grass or asphalt surface. When I’m done with laps, I can head for the surrounding hills, sprint up, and jog back down as I admire the views of downtown spires and distant Taconics. I still haven’t gotten up the nerve to jump in the pool with the kids, but another hot summer will send me there.

Personal safety. Common sense applies in both the woods and the streets: Be wary of carrying much cash, be sure to bring your phone—not so much for 911 as for Uber if you twist your ankle. As a solo female I actually feel safer from human threat in the city than on isolated country trails.

Up-jutting sidewalk pavers are another story, however, as my scarred knees can attest. I try to keep shifting my eyes up and down—and make myself just plain stop if something’s really intriguing. Answering curiosity can be more important than achieving a good time, and a stimulating urban trail run offers a lot of interesting questions. 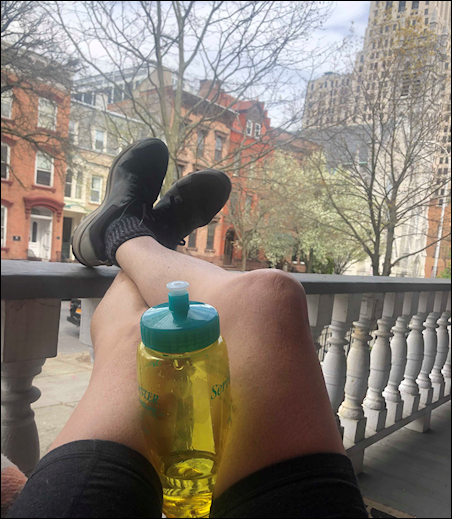 End of the trail, watched over by Alfred E. Smith and the hawks
that hang out around his tower. 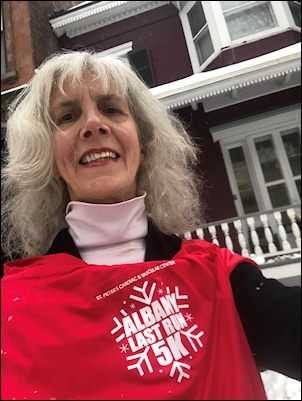 Drawing the Line. Finding the Gems.
Running is my Boyfriend. Golf is my Crush

Stephanie Mumford Brown is Chief Wiseacre at Wiseacre Press, where she’s trying to compile the missing assembly instructions for the second half of life. She also writes the Times Union Advancing blog.