The Hairy Gorilla Half Marathon and Squirrelly Six Mile: Racing in a Pandemic

Over the past few months, I’ve written a few articles about the experience of trying to hold races during the pandemic. In essence, it’s been brutally difficult. What has kept me going in spending unending amounts of time in developing the proposals and logistical plans is the conviction that we can modify the race experience to be safer than other activities that are allowed, not to mention the irony to me in observing that local parks and paths do not seem to be regulating their attendance. Should it matter if it’s a race or simply the reality of how a nice day brings out hundreds of people to enjoy a popular trail on a sunny Saturday? Wouldn’t it increase safety if there is some level of organization that is managing the flow (density) of everyone?

On August 23, we held our Thacher Park Trail Running Festival which was limited to the 50 person gathering cap by NYS Parks. Six days later was our Druthers Helderberg to Hudson Half Marathon, for which our plan had been approved to operate without the cap, and rather at a fixed density (just like any store) - for which we’d start 2 people every 10 seconds. Once we were past that event, I submitted a proposal to NYS Parks that expanded upon the proposal I had created for the Druthers Helderberg event by now including photos from how we had deployed these logistical modifications at those two events in late August.

Several weeks later, I was notified that our plan had been approved, which meant that we would not be limited to the 50 person cap. It was a tremendously rewarding feeling, both for the satisfaction of getting approved, along with the deeper appreciation for their trust in us as a professional company to execute our event with full respect and understanding of the situation. Ultimately our permit required a NY Forward plan to be completed and submitted with it; we were being recognized in essentially the same way in which retail establishments and restaurants have been able to operate. We’d be racing on Halloween!

About a week before the race, I randomly saw a post online that was mentioning the potential for our first snowstorm of the year at the end of the week. You’ve got to be kidding me! As the days ticked by, the certainty of that occurring was increasing, along with considerable cold that would accompany the storm. 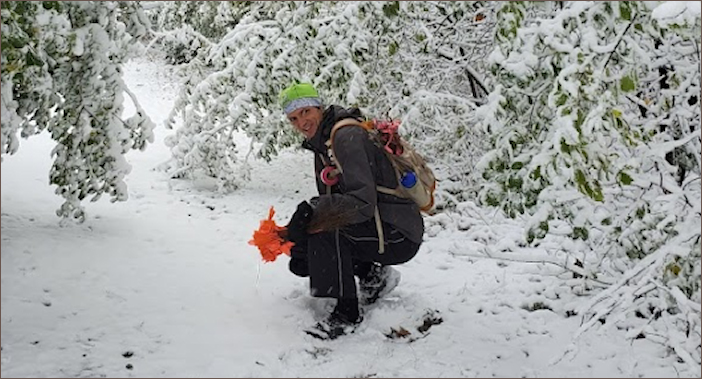 As we only had the 24 hours before the event to setup, there was no other choice: whatever the weather that Friday, we’d be in it. At 9:30AM on October 30, Aaron Major and I loaded up our backpacks with flags, signage, and flagging tape, and took off running the course beneath falling snow. Over 4 inches had already accumulated as our trail running shoes quickly were covered in fresh powder, adding a whole other element to the task of running the course to mark it.

Roughly 4 hours later we were done, and I touched base with Emily Chromczak who was setting up the decorations around the main field and pavilion. As she continued with that, the start/finish area and staging areas were setup. The latter was a new addition to the pre-race logistics to ensure that we would prevent the formation of crowds, as well as to organize the runners before we led them to the start line. As that wrapped up, Emily was already back at the AREEP office with Maureen Cox setting up for packet pick-up. More than half of the registrants came that evening which helped to reduce the burden of race day pick-up. 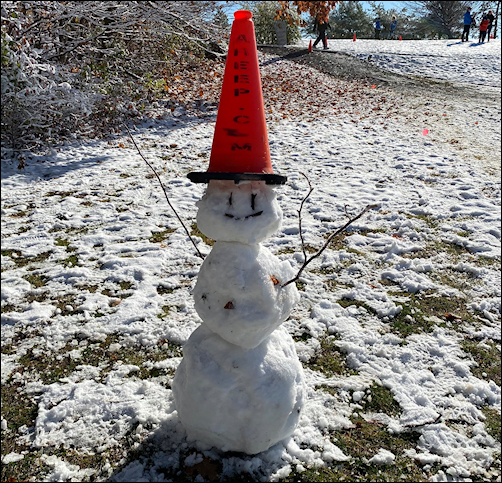 Last year it took roughly 30 seconds to start everyone. This year, with basically the same amount of people, it took 28 minutes. (A 5600% increase.) Runners were divided into 6 groups, and within each group, 1 to 4 people started (masked) every 10 seconds. The mask could be removed once running and while able to socially distance, for which the staggered nature of the start effectively enabled. Additional modifications included the requirement that runners carry their own water (side note: it was 23 degrees at the start) and rather than having a BBQ/potluck, we contracted with Hungerford Market in Altamont to provide boxed lunches for everyone. 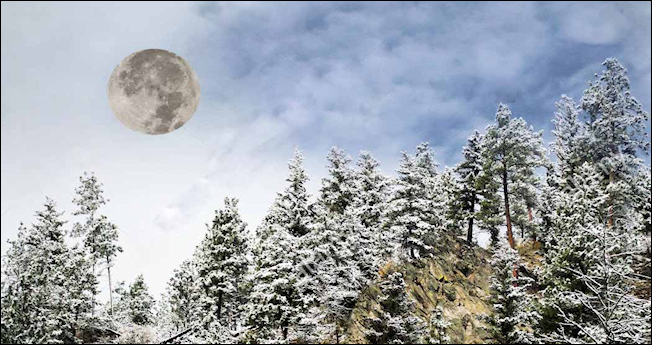 Look at that moon! I can’t recall a more gorgeous race morning than the one we experienced on Halloween 2020. As I drove to the park, a giant full moon was staring right back, mid-way above the horizon. Arriving just before 7AM, the first hints of daylight were cresting into view, glistening off the snow covered trees welcoming us to the park. It simply was beautiful.

I was wearing boots with 2 pairs of socks, had on 2 pairs of pants, numerous top layers, along with gloves, a bandana, hat, and mask. Being cold while working a race is not fun and getting wet is wildly uncomfortable. In my car were ample changes of clothes in case I needed it.

Within a few minutes, the electronics from the truck were unloaded and being put in place, another team was setting up packet pick-up, still others were setting up the race graveyard (yes, gravestones with registrant names on them) along with more of our volunteers arriving to serve in the many roles that combine to make events run smoothly. 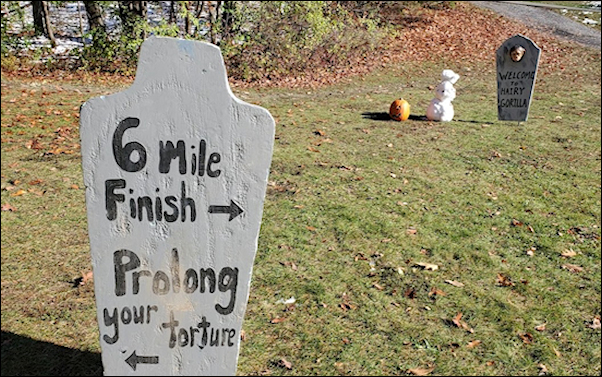 There was no wind. NO wind. Absolutely unheard of up at Thacher Park. We’ve had years where items are practically blowing off the side of the mountain - which beyond the difficulties wind can cause (e.g. knocking things over) - it also makes it even more frigid. But, it was just perfect! As 9 a.m. approached, we called for the children in the kids’ race to come to the start area, and beneath a gradually rising sun in a clear blue sky, off went about a dozen kids, mostly in costume, on a half mile loop around the field decorated in the spirit of the holiday.

Thirty minutes later we kicked off the first runners from the first group, with each small subset of them having their moment literally on the start line, for the socially distanced spectators to see - and grab some pictures too! Some of the costumes truly were amazing, and it is always such a blast to see the creativity and themes that many of the runners bring to the event. There are so many unique aspects to this race, and then, when you combine them all, it is definitely unlike any other one we produce.

The course, itself, remained as beautiful as the day before, with most of the trees still painted in snow. It was a winter wonderland on most of the course, and even though a lot of snow melted over the several hours we were there, it didn’t hinder one of our volunteers from building a snowman at his volunteer location.

We gave out commemorative cloth face masks to the runners, which, 2020-reason aside, considering the cold, they also did a nice job of keeping one’s face warm. It was fun to see many of the runners wearing those masks during the event, further getting into the spirit of the Hairy Gorilla.

Finishers were rewarded with the traditional Gorilla “Medal,” an adorable plush gorilla - this year with a ‘necklace’ bearing the name of the specific race the person did, along with the year and a Halloween sticker.

By 2 p.m., the last of runners had departed the park, and within an hour, we were fully packed, the 16th Annual Hairy Gorilla Half Marathon & Squirrelly Six Mile complete!  2021 here we come!! 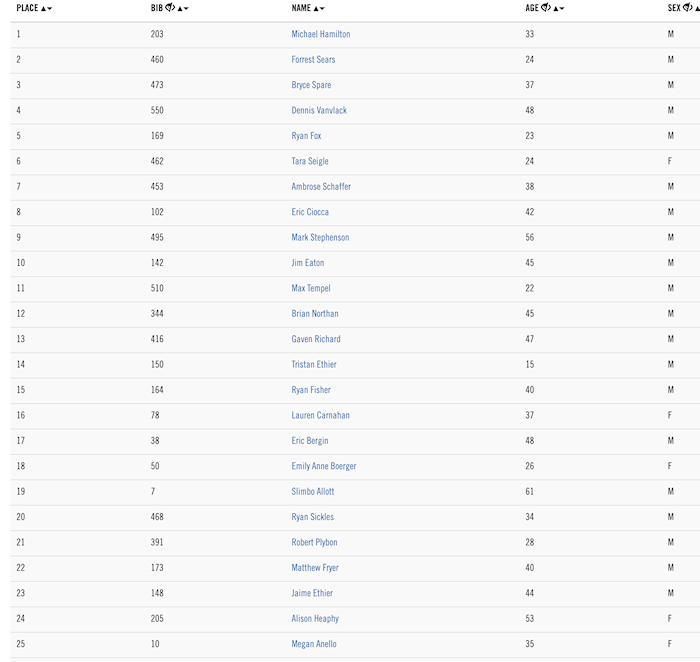 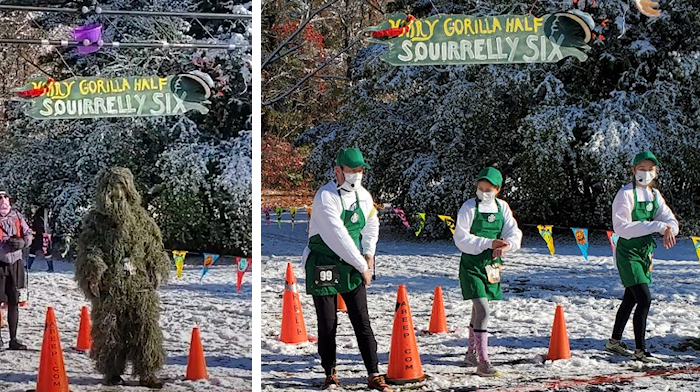 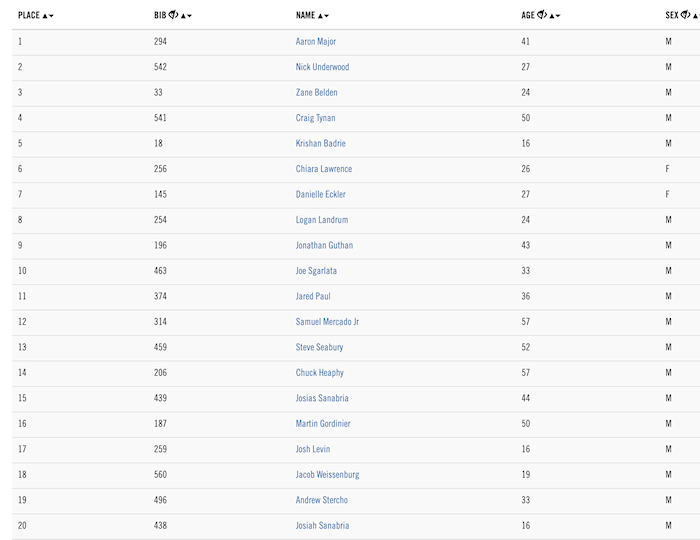 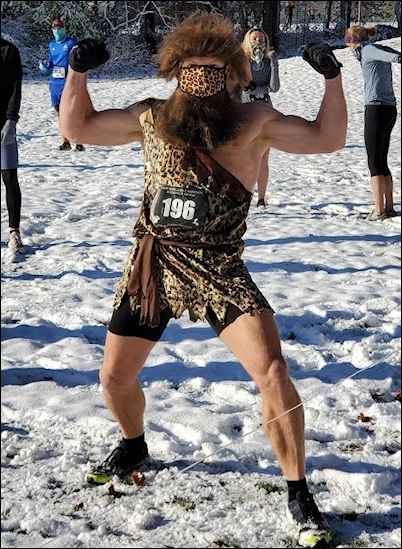