On Sunday, September 20, 2020, Michelle Merlis completed the Devil’s Path trail in the Catskill Mountains in 5:29:34. It was the fastest known time (FKT) ever run by a woman for that trail, and nearly 45 minutes faster than she believed she was capable of until an unexpected email on Labor Day changed everything.

Michelle is driven and determined in a way that I have rarely seen in another person. This differentiation mainly rests upon her self-discipline and ability to fully commit to whatever she is focusing on. In short, she doesn’t spend time talking about what she wants to become or achieve, rather she simply spends time quietly doing what it takes to reach that goal. And she finds considerable joy in the process of working towards the goal - so while of course she hopes that race day brings the desired result, even in its absence, many weeks and months of commitment and experiences have yielded benefits that aren’t as easily reflected on a race clock.

She is a passionate student of the sport, devouring books that cover the gamut of everything that is running. Her natural tendency to feel that there’s always more a person could know has her on a course of personal development that has no finish line and has inspired her fervent commitment to Mountain Goat Running, the team that she leads. In her, they have a coach that epitomizes leading by example who also prioritizes them individually and is forever committed to seeing all of her athletes as inspirations to one another, with us all capable of continuously becoming better versions of ourselves; more generous, more caring, more patient, and also, of course, faster. In early 2020, Michelle signed up for the Superior 50 Mile race in Minnesota. She had lived there for a couple of years and was excited to reconnect with the running scene and landscape that made her time there enjoyable. As the pandemic’s grip on society tightened and races/travel no longer became viable, she shifted her competitive attention to the world of FKTs as in her Devil’s Path accomplishment.

On a basic level, having an FKT is the same as being a course record holder for a ‘real’ race, with the exception that FKTs primarily refer to any well-known course/route that doesn’t have a ‘real’ race held on it. The courses and times are maintained at FastestKnownTime.com.

Is it really about finishing ahead of other people? The notion of race awards intrigues me. Why do we enter races at all? Part of it surely must be the overall experience - namely the music, community, signage, atmosphere and related differences that separate an organized race from any basic training run - and yet most races also give out both overall awards and age group awards. In addition, nearly all races 15K and longer give out a medal too. Is this all necessary? Do I need another shirt? What pieces of the race experience enable it to reach critical mass by which we are compelled to participate?

The drive to be the best you. Beyond “beating” other people lies the true challenge: beating yourself. Reaching or exceeding your goal. If given the option to run the best half marathon time of your life but finish last in that performance or run any other time and win a trophy, which would you take? Is the physical item truly “worth” more than the lifelong knowledge and experience of what it took to have that new best running day of your life? Perhaps the best case is for both to happen - but quite often our best performances are only achieved because of the dense competition surrounding you, propelling you forward as you latch onto one another, hoping that somehow your combined efforts of working together will yield a result neither of you could have achieved alone.

Alone. At the start of the summer, Michelle decided that she would go for the Devil’s Path FKT in mid-September, around the time her 50-mile race should have been. She specifically would be competing in the “unsupported” category, which refers to not just running alone but also not being allowed to take any outside (or self-provided assistance, such as dropping water) assistance at any point during the run. In simple terms, you only have what you start with on your back (in your backpack/waist belt, etc.). You are permitted to take advantage of the natural environment (i.e. you can drink out of streams, yum!) but in all other ways, it’s as primitive as it gets - particularly when doing a course with virtually no road crossings and that is often backpacked by hikers in 2 or 3 days.

Over the past few years, Michelle has been on the Devil’s Path on several occasions. In almost all cases, they were social outings of varying lengths of the trail with no emphasis on time, but rather the fun that accompanies the shared experience of trail running combined with taking in the views and stopping to eat along the way. Having that experience, she estimated that she could run roughly 6:30 (six hours and thirty minutes) for the entire traverse; perhaps 6:15 if she had a good day. And with the existing record just shy of 8 hours, it would make her effort worthy of the FKT list. If she did it, of course. And, of course, if that was still the record she had to beat.

Months after setting the goal, and less than 2 weeks shy of her effort, Michelle received an email notification stating, “Your record has been broken.” It’s a useful tactic by Strava to engage its user and to keep them on the platform. The record that was broken was a segment along the Devil’s Path, no big deal. Truly, if anything, many Strava segments (user defined ‘courses’ of any distance, typically portions of a route someone runs) probably have a negative effect on one’s training by subtly encouraging harder efforts on runs that don’t call for it. But as Michelle dug deeper, she realized that this woman had not only beaten some of her segments along the entirety of the Devil’s Path trail but that she had run the whole thing - and dropped the existing fastest known time on it by roughly three hours, plummeting it roughly 45 minutes faster than Michelle had believed she was capable of running. That woman’s name is Charlotte Winkler.

We were headed home from a successful trip of exercise and play in Maine and New Hampshire, with Michelle having run the Presidential Traverse the day prior (a 20+ mile trail that ascends Mount Washington, among other peaks in the White Mountains) and in good spirits about her fitness going into the Devil’s Path run. This changed everything. And while, as mentioned above, ultimately it is the competition against ourselves that truly is the barometer for which our happiness and training is to be judged, she had been eyeing this record for months. Was it out of reach?

A convergence of emotions beset her. As a huge proponent of women’s running (she’s conducted professional research on it, boycotted events for not awarding equal prize money by gender, and taken an activist role to promote women’s running) she was thrilled for Charlotte’s accomplishment. Understandably, her happiness for what Charlotte had just accomplished came at the cost of upending part of her purpose for what had been her goal for months: running the fastest known time on the Devil’s Path.

The hardest part was facing the most basic question: was she capable of still running the fastest time on it - now 45 minutes faster than what she had believed was her current peak potential? Confronting our limits is the most difficult thing a person can do. Most of us shy away from it; when in school, research has shown that we tend to study things we already know versus focusing on the things we don’t. Rarely do we like to go outside of our “comfort zones,” and while a traditional (pre COVID-19) race puts you in an environment where the physical presence of others can help propel you to a new best, running solo, in the age of COVID-19, is a whole different animal. What’s the point? There are so, so many places a person can choose to run. Was it worth still going after it? 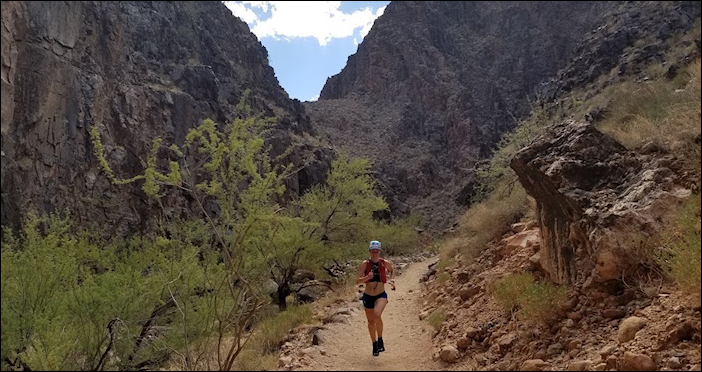 Michelle decided that it was.

While the distance of the Devil’s Path trail is a bit under a marathon, considering that its elevation gain is nearly 10,000’ and that Michelle’s original goal time was twice the time of her road marathon PR, the final 2 weeks leading up to such an effort are not a time during which one can do much to improve their fitness; rather like any marathon, the final 2 weeks are a time best served by simply not getting injured or doing anything that can jeopardize race day. And so, with the ability to improve physically no longer an option, Michelle switched to the one thing she could continue working on: her mental strength and game plan.

Ever the data scientist, she studied the course and took advantage of the data on Strava to analyze segments and splits to be able to develop an idea of what it would take to run Charlotte’s time. For those who have never run a trail race on mountains, it’s hard to stress how different it is than a road. Michelle’s fastest and slowest miles would be nearly fifteen minutes apart, and, in truth, sometimes a 20-minute mile going uphill is actually a more impressive effort than an 8-minute mile going downhill. This is radically different than your typical road race, especially a flat one, where the goal of even pacing literally can mean aiming to run roughly the same exact time for each mile.

On September 20, 2020, shortly after 4 a.m., we awoke for a race with one entrant. Within an hour, long before sunrise, we were in the car, driving to a place that didn’t know it was going to have a race; for it’s truly nothing more than a non-descript trailhead with a small kiosk. Upon arrival, Michelle proceeded through an elaborate movement prep aimed at not just waking up her body, but getting it ready for the ultimate physical test; for she was soon going to take off, running and climbing along one of the hardest trails a person can find in the Catskills and beyond. And yes, she was racing Charlotte’s metaphorical shadow. But beyond that, being the pull of another person, she was ultimately racing just herself. What was she capable of?

Less than five and a half hours after she started, she came barreling out of the woods. Depleted but elated, she laid upon the ground, relishing the emotional joy and physical pain as they intertwined. And while yes, she had run the FKT, the effort it required because of Charlotte’s run from 13 days earlier enabled Michelle to accomplish something else: going beyond a limit she had placed on herself. It’s not every day we get to test our own boundaries, and on the days we do, and on those days for which we go beyond them, there is no comparison. It’s a joy that invigorates one’s life and makes all the hard work worth it, and truly creates the memories that last a lifetime. 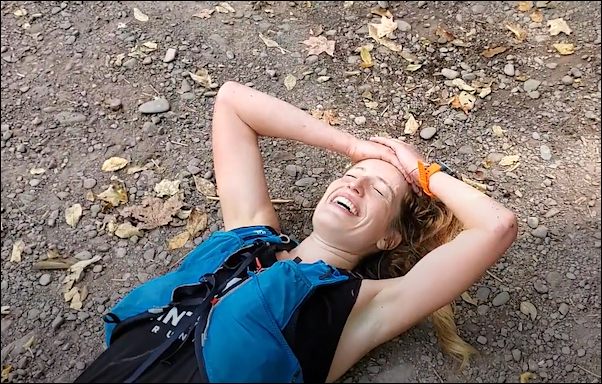 Scottish Trails, The CAW, July 2020
What to Read, Watch, and Listen to in Running Right Now, The Pace Setter, October 2019
10 Tips for a Lifestyle of Health & Wellness, Flora Blog, June 2019
Women in Running by the Numbers, The Pace Setter, May 2019
Spectating the Western States 100 Mile Endurance Run Like a Champ, June 2018
How I (Quickly) Became a Run Commuter, Flora Blog, May 2018