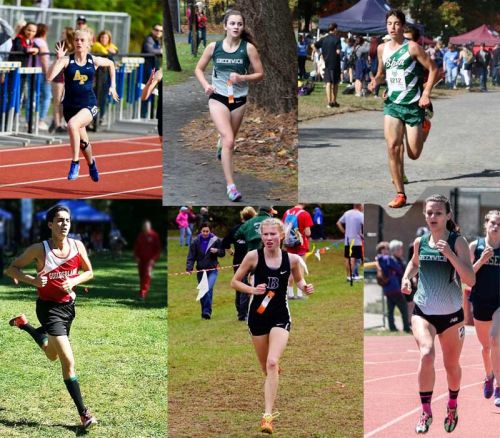 Shrader scholarships -- named in honor of long-time HMRRC member Bill Shrader Sr., an early proponent of distance running in the Capital District -- are awarded to encourage and support young runners in their efforts to make running a lifelong part of a healthy lifestyle.

The six $3,000 scholarships are awarded annually to male and female runners from Section 2 high schools who are planning to attend a college, university or community college on a full-time basis. Applicants are evaluated based on their running experience, their extra-curricular activities, letters of reference, and an essay describing the importance of running in their lives. They are selected by the HMRRC’s scholarship committee, which was no easy task as this year as there were 52 applicants from 32 different schools across Section 2.

Following is a sampling of their award-winning achievements:

Quinn Collins, of Greenwich Central High School, was named Wasaren League All Star for every season she participated in track and cross country, and she was twice named a Times Union Indoor Track Section 2 All Star for the 600m. She qualified for the state meet four times in cross country and three times in both indoor (600m and 1000m) and outdoor track (800m and 4x800m relay), and she won the 2019 Division 2 800m state championship in outdoor track! She has won two team cross country state championship titles and has earned several team and individual titles in Section 2 for indoor and outdoor track (600m, 1000m, 400m, 800m, 4x400m, 4x800m) and cross country. She is also a two-time New Balance Nationals qualifier (freshman 400m and championship 4x1mile relay). This scholar-athlete (Math League, Spanish Club, National Honor Society) was a participant in the World Food Prize Global and NYS Youth Institute as well as a volunteer for Special Olympics and Relay for Life. Quinn is soon headed to the United States Military Academy, where she will run cross country and track.

Faith DeMars, of Ballston Spa High School, served as team captain for cross country, indoor and outdoor track in her junior and senior years. She has been named a Suburban Council All Star in cross country and track as well as being named to the New York Sportswriters Association All State Cross Country team. She holds 8 Ballston Spa High School records in cross country and track and has been named her school’s MVP multiple times in all 3 sports. One of her specialties is the 2K steeplechase, where she has won sectional championships three times, medaled twice at the state meet, placed in the top 10 at the New Balance Nationals, and won the 2017 USATF Junior Olympic National Championship title! Another specialty for Faith is the longer distance indoor events, as she holds the 2020 section 2 title in the 1500m and 1000m. She has medaled at the state indoor meet twice each for the 3000M and 1500m. In addition, Faith has twice earned medals at the NYS Cross Country meet and once at the NY Federation meet. This scholar-athlete (National Honor Society) has participated in the American Legion Auxiliary Empire Girls State program and serves as a children’s ministry volunteer at her church as well as a volunteer coach with the Ballston Area Recreation Commission. Beginning in the fall of 2020, Faith will run cross country and track at Penn State University.

Jack Parsons, of Guilderland High School, won the freshman XC race at the 2016 Manhattan Invitational and continued to achieve, being named one of the team captains his senior year. He placed 3rd at the 2019 Section 2 cross country championships and 18th at the NYS Championship race. He led his team to a 2nd place finish, the best in school history. He was named a Suburban Council All Star his junior and senior years, and he went to New Balance Nationals for outdoor track, running as part of the 4x800 relay in his sophomore year. This scholar-athlete (National Honor Society) has held lead roles his junior and senior years with the Guilderland Players and has participated in the Chamber Choir. For two years he was involved with Model United Nations and for four years he played CYO basketball with his church. Beginning in the fall of 2020, Jack will run cross country and track while studying Accounting/Finance at Marist College.

Brynne Wright, of Greenwich Central High School, has won 5 individual sectional titles in cross country and placed 2nd twice (class D), 3rd once (class C), and 5th once (class D) at the NYS Cross Country Championships. Her team won the state title 3 times! She’s been recognized by the Times Union multiple times as an All Star for cross country and for the 2000m steeplechase, where she has twice participated in the New Balance Nationals meet and twice placed in the top 10 in the NYS outdoor track meet. She has another top-10 state finish in the 3000m race. In addition to all her running, Brynne is captain of the Saratoga YMCA Competitive Gymnastics Team and she’s part of the leadership team at Dunkley’s Gymnastics Camp. This scholar-athlete (National Honor Society, Math League, French Club) is also involved in H.O.P.E (Helping Others, Providing Empathy) Club. Beginning in the fall of 2020, Brynne will run cross country and track at the University of Rhode Island.

Lydia Ware, of Averill Park High School, has been a part of 6 school-record breaking relay teams and has 4 school records of her own (100m outdoor, 200m outdoor, 55m indoor, 400m indoor). She’s been to the state meet 4 times (twice for indoor and twice for outdoor track) and has been named an All Star by the Times Union and the Suburban Council. She was featured as WNYT Vent Fitness Athlete of the Week and is part of the Capital District Sports Women of the Year Class of 2020. She’s been honored as a NYS scholar-athlete for 7 seasons and she’s an active volunteer and member of Brunswick Church. Lydia plays soccer as well (Section 2 champions in 2018) and is in the school orchestra as a viola/violin player. She will be a sprinter on the track and field team at Roberts Wesleyan College in the next academic year.

We congratulate all five winners for their awesome achievements both on and off the track. We wish them well in sports and academics in college and hope that running will always play a big part in their lives. Maybe we will see them at an HMRRC event in the future.