Runners’ Thoughts on Dodge the Deer 2020: The First Actual Race in Months! 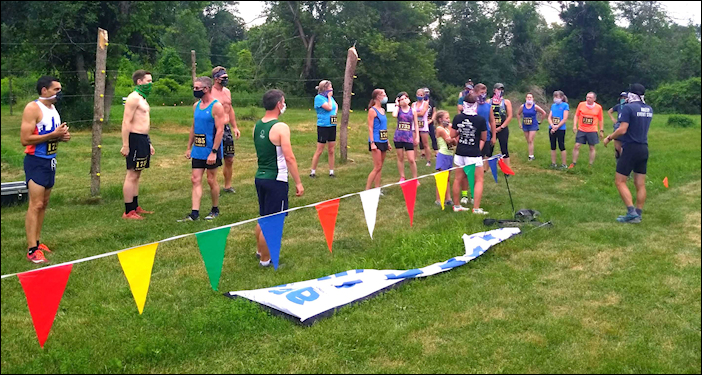 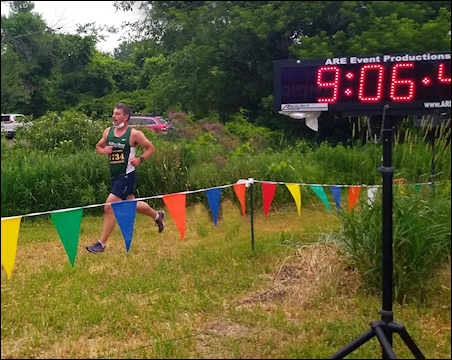 I was so happy to see an actual race on the schedule. After training all winter to run the Helderberg to Hudson half and having all races canceled it was a blessing. I spent most of last year dealing with many small injuries and never had a chance to actually train and get into decently good shape. Now after having many months of fairly consistent training I could finally race! I am not really motivated to do virtual races so this was a much more enticing endeavor. Plus, my daughter who missed spring track was going to be able to race as well. She was in the same boat having been training consistently all spring with no racing.

The race went off smoothly. They had us 25 to a heat and had to wear masks to the starting line. When we spread out, we could remove the masks. The course was a 1-mile loop that was pretty technical in spots. You had to avoid roots and divots. My kind of course! I have always preferred cross country style races where you are as focused on the terrain as the competition. Plus, it removes shoe technology!

I finished my loop and was told that my daughter was leading all the women in our heat which was very exciting to see. After we left the race so the next heat of people could come into park, we went home so we would check every hour to see if any other women bumped her time for the fastest women of the day. She was excited to see she held onto the fastest time! I'm looking forward to the next ARE trail festival race! 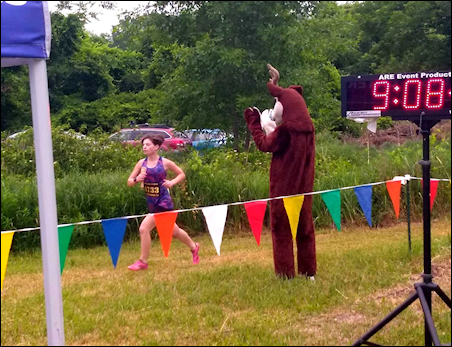 This year’s Dodge the Deer 5k was certainly an interesting one. It proved that races could still be held in our current strange and unusual environment, even if they might have to be a bit smaller than usual. I thought having a staggered start was a great way to ensure social distancing measures as well as to keep from creating a large bottle neck. It worked well. The start was very reminiscent of cross country ski meets and was implemented quite well for a sport that does not usually rely on this structure. As someone who doesn’t usually enjoy the large crowds at races on normal occasions, having the start come down to two at a time was quite enjoyable. The course itself was somewhat technical due to all the ruts in the ground, but it was a great way to throw myself into racing again after the cancelation of spring sports. The smaller size of the course and its looping structure led you to be more aware of your position in the race and how others were doing, something you don’t usually get as much of in a cross country race. It was kind of interesting to know that I wasn’t as far away from my dad as I have been in many previous races. As a whole, I thought this race was really fun and I’m very glad I was able to attend. I hope that we will be able to have more races soon! 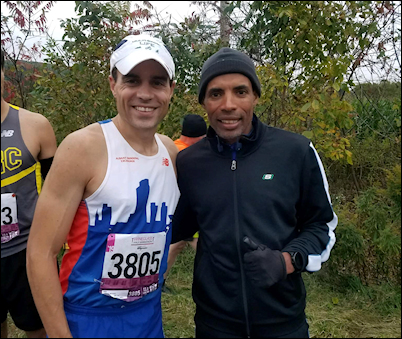 Trying to keep my interest in competitive running going during this pandemic has been a challenge.  Without being able to meet in groups and without races to focus my goals, I’ve most certainly been tempted to revert back to 10 years ago when I used to tell people that I was “retired.”  For me, sharpening speedwork has no point and virtual races just don’t cut it without the crowds to push and cheer for you.  Then Josh Merlis announced that he was still holding the Dodge the Deer event.  Without hesitation I signed up for it.

We were told that this would be a “basic” event in that one would show up, run the race, and then leave immediately after.  There was no awards ceremony and no crowding waiting for the start to begin.  You had to wear a mask to pick up your bib at the registration table and to the start but could remove it once the race started.  I was scheduled to run at 9 am -- the first of the day’s four heats.   No more than 25 were allowed in a heat.  You paired with a person of your choice at the start and two people started at a time.  The course footing was tough and wreaked havoc on the ankles, and, despite my ankle history, I chose to run anyway.  Josh was great announcing the progress of all individuals during the event.  The feeling of pushing yourself while others were there watching was closer to normalcy than anything since my last race at the HMRRC 10 mile back in February.  I grabbed a cooldown jog with Bob Irwin after and left before the start of the next wave at 10am.

I think it is important to take these opportunities as they come, even though things are nothing like the world we once knew.  People shook hands again after the Spanish flu hit.  Measles, smallpox, and polio were all devastating pandemics/epidemics in their time and are now easily prevented.  Hope is a good thing and no good thing ever dies (thank you, Shawshank).  One day we will all gather again to resume normalcy.  Believe! 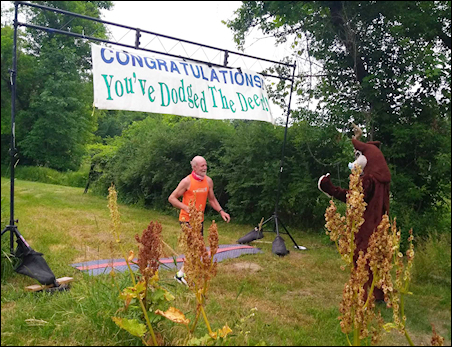 “Dodge the Deer” has never been on my radar and never having participated in it before I didn’t have any expectations of what it should be. It didn’t matter if there weren’t any awards or that activities held in previous years were being curtailed. If ever a time for running event was needed, this was it. It was a real run, with people I knew, and a trail run to boot! Thank you, Mat Nark for putting it on my radar, Special thanks to Josh Merlis, ARE, and all the volunteers for hosting this fun event and saving this runner’s sanity! 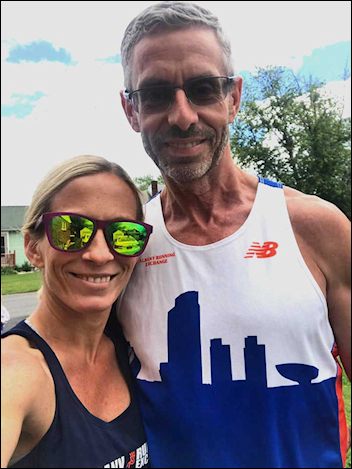 Shannon and I had trained all winter. We ran a strong half marathon in January. We were stoked for the spring race season. Then came the global pandemic. We were disappointed, but resigned to sheltering in place, mask wearing and social distancing. At least we were able to run. I even did some solo time trials with good results. We watched as race after race was canceled. The only glimmer of hope... Dodge the Deer. Surely this little gem of a race would fall as well. What phase would we be in? How could AREEP pull it off? We kept it on our calendars and crossed our fingers. But it didn’t cancel! We were so excited to line up as participants in a different but nonetheless familiar event. Different place, different rules, but the same friendly camaraderie that is always a part of ARE events. Shannon and I had set some goals. I have beat my own time every year 4 years running. Together we wanted to capture the Mr. and Mrs. Dodge title given to the couple with the fastest combined time. Though no official awards were given this year we accomplished our goals and had a great time doing it! 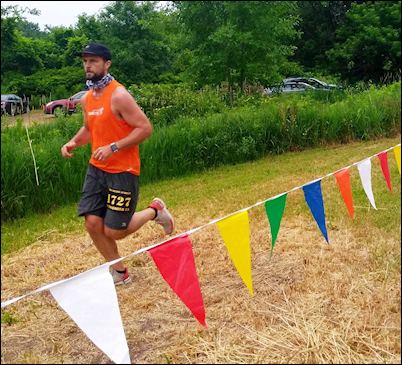 It has been a strange, strange year for running and racing. No physical races on the horizon for as far as the eye can see. While I’m glad there have been virtual options for people to take advantage of, I can’t seem to get myself into them. A friend of mine told me about the Dodge the Deer 5k and that it was still happening, but I didn’t believe him. In the back of my head I told myself that it would get cancelled just like every other race. To my shock and delight I was wrong! With pandemic level precautions in place–5 waves of runners, face masks, 5 second staggered starts, no potluck, boxed/bagged food, 50 on-site participant limit–one might think the race experience would be lacking. While the race probably didn’t look like it has in the past, there were real people, running a real race, competing against each other, tracked with real race timing. In addition to it being real, the other parts that I love best about racing were still present–a tight knit running community coming together to compete against each other and have fun doing it. Running with other runners is a gift that should never be taken for granted. 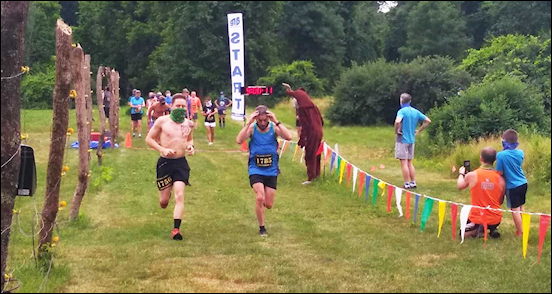 I want to start off by saying thank you to the Albany Running Exchange for promoting and giving the community a safe race environment. Runners love racing, me being one of those runners and they delivered!!! It was awesome to get out there for the first time this year since all my other races had been canceled because of COVID-19. At first, I was just excited to be able to go to a race, but I was still cautious about the pandemic, and concerned if the race would happen. The race was everything you could ask for. Even with having to wear a mask, it was still enjoyable. Sure, things were different, but we still got to see people, run an awesome race, and most of all get out there. I'm happy we could all experience this especially in these difficult times. I look forward to the next safe race they put on. 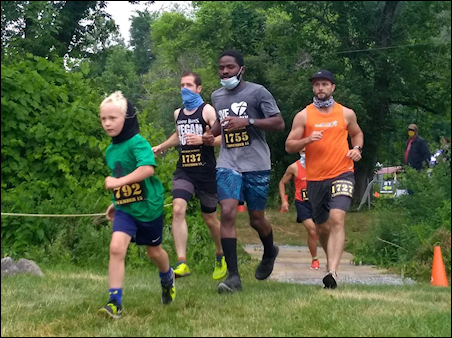 It was really great racing again especially after the hard year we’ve had. Enjoyed coming to Dodge the Deer, it was a fun and great run.

Really hope this has proven to everyone that races can be organized and run during this period. Hope this can be a pace setter and example for future races this year. Don’t want them cancelled. 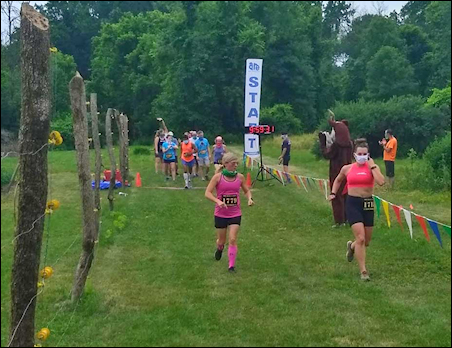 Michelle Davis is on the right

Signing up for Dodge the Deer was a last minute decision. I haven’t been running as much. It’s been hot and humid, and I just wasn’t in race shape. As I thought more about it, being in a group environment with my team once again was a great idea after these last 3 months.

As I pulled into the race location and saw the tent, volunteers and people running, I realized how much I actually missed the race setting. Although, it was different from any other race (2 person start, waves every hour and mask wearing), I saw so many familiar faces and I put on a bib!

The course was made up of the longest mile as it twisted and turned with uneven ground. But I had good company the whole way. It might have been a different experience, but I am glad I signed up! 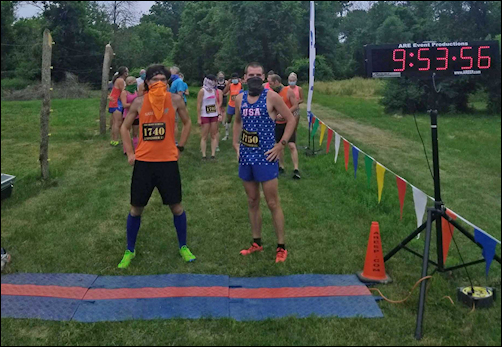 Nathan Laing on left, came in 2nd and Richard Messineo on right came  in 1st

First off, I would like to express my appreciation for Josh and ARE events production for organizing this modified event given the present circumstances. We as runners have learned to adapt through race cancellation after cancellation, and to toe the line again is a victory and step in a positive and safe direction. With uncertainties still present regarding the future of Coronavirus, we have an obligation to keep each other safe while actively establishing a new normal. To see runners together again brought a smile to my face and I know many runners out there, including myself, are hungry with the appetite of success! Forward Together! 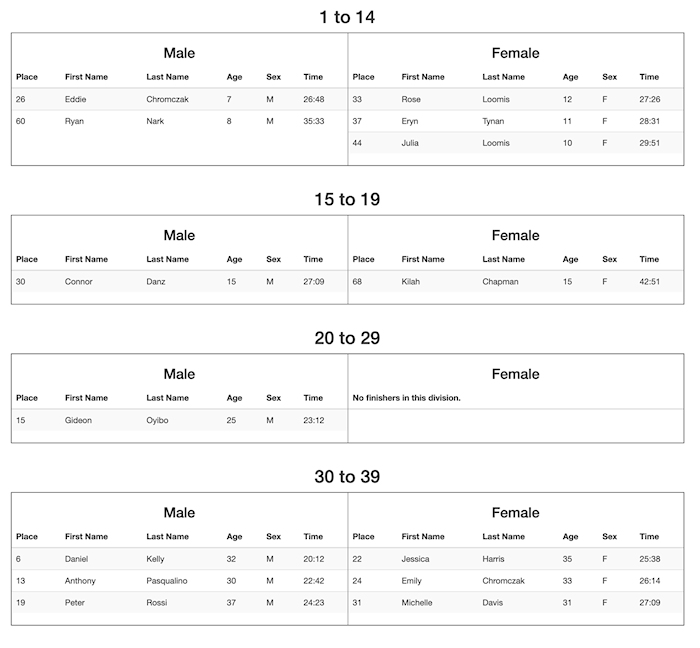 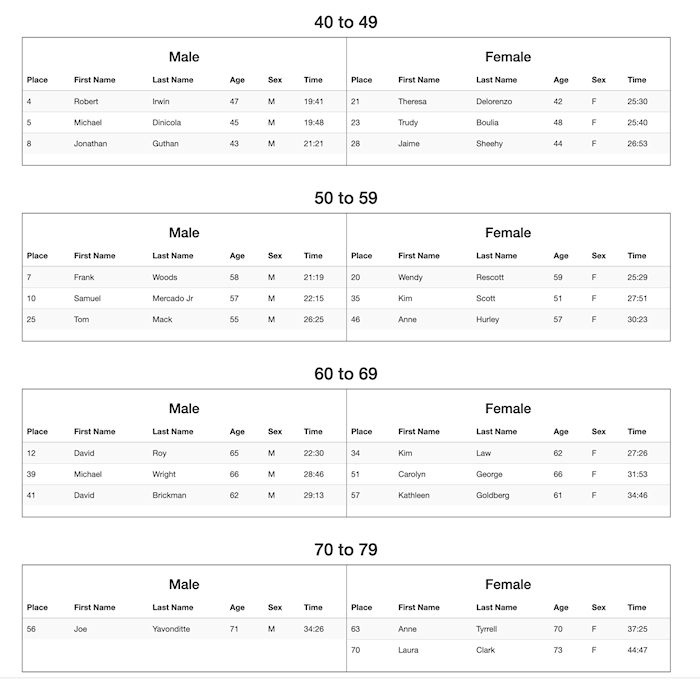