How to Hold an In-Person Race During a Pandemic 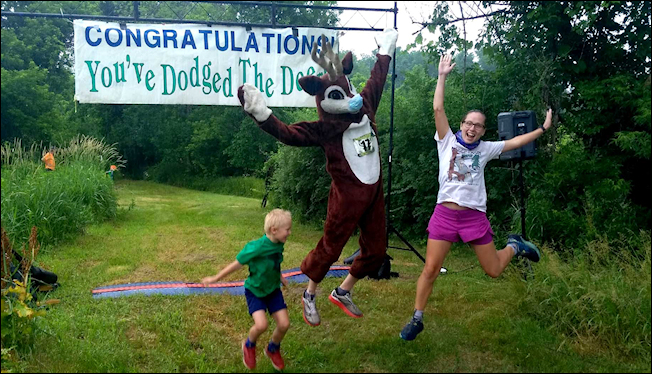 In my wildest dreams I never would have thought I would be writing an article with this title but here we are. Covid-19 has taken so much from us all but it couldn’t take Dodge the Deer away! This year threw a few curve balls at our beloved event. It took some creative thinking, but we found a way to make it work.

Dodge’s forest has been at Schodack Island State Park since 2006 and we wanted it to be there again this year. We were tentatively on the park’s schedule and got the green light in mid-June to start spreading the word that the race was on. As part of our approved permit, we were instituting several modifications to make sure social distancing guidelines were followed, including several small waves of starters spread out over the day, face masks, constant reminders to stay six feet apart, having runners bring their own water, and boxed lunches in place of our normal potluck barbecue. Despite all of these modifications, we were happy to share the news with the running community and immediately got to work on doing just that.

The very next day we were notified by the park that despite their assurances and approval the day prior, they decided they were no longer allowing us to hold the event there, even with it being fully compliant with current NYS regulations. We were not thrilled but also not ready to give up. After calling a few more venues and receiving the same response I was ready to give ourselves kudos for trying and call it a day but Josh was determined. He asked me if we could have the race at our family farm. 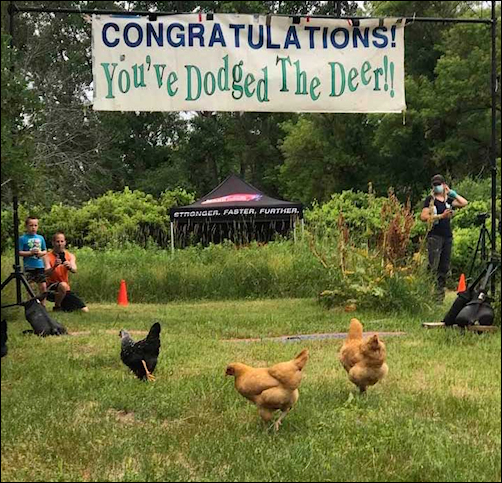 Chris and I bought our farm property about two years ago from the Albany County Land Bank. When we bought the parcel it was an abandoned, vacant lot that was so overgrown we literally could not walk on it. Chris wanted to grow Christmas trees. Honestly, I thought maybe Chris was having a mid-life crisis at 33 when he came home with 100 baby Christmas trees and put them in pots on our very small lawn in Delmar. This was prior to us even thinking about purchasing the land, but I digress. Chris had a vision that I was having trouble seeing. Chris spent most of the first year clearing the land using a borrowed high wheeled string trimmer and a ride on lawn mower that caught on fire more than once (luckily there is a creek on the land). Last spring, he roto-tilled a plot for a garden and we had more produce than we could keep up with. I helped plant a few Christmas trees and was starting to like the land but wasn’t completely in love yet.

Fast-forward to this spring. The pandemic hit and everything was canceled. Chris spent most of the spring getting the soil ready and starting plants in our greenhouse. I didn’t have to chauffeur the kids to sports practices, birthday parties, or anything else so I helped him plant and realized that I really liked it. Weeding is my new therapy, and I feel sort of sad that I wasted so many years not knowing that I like gardening. The kids each have their own garden plots that they are responsible for taking care of and they can keep whatever money they make from selling vegetables. Chris is helping them build their own farm stand. When I go to the farm, I can forget how messed up the whole world is right now. The farm is our new happiness.

Happiness should be shared, so while I was hesitant at first I got over it and agreed. The week leading up to the race was interesting, to say the least. Josh rented a piece of equipment to help clear a larger parking area, which he, sure enough, eventually drove into a 12' ditch and spent the rest of that day and the next trying to get it out. Chris and I ordered a load of crusher run stone to improve the driveway and planned to use the rented equipment to spread it. Since the equipment was in a ditch, we ended up having to spread it with shovels and rakes, which is a great workout if you’ve never tried it. Shout out to David Newman who spent hours helping us and whose presence made it all the more enjoyable.

The farm isn’t enormous, but Josh and Chris were able to come up with a one-mile loop. The participants ran the loop 3 times and we had waves of fewer than 25 people start every hour. Within those waves we started 2 people every 5 seconds to allow for social distancing. Everyone was required to have a mask with them to enter the property and they were encouraged to pull their mask up when they had to pass someone during the race or any other time that they were not 6 feet apart from another person outside their household. Everyone was very respectful of these new rules and seemed to enjoy being there. 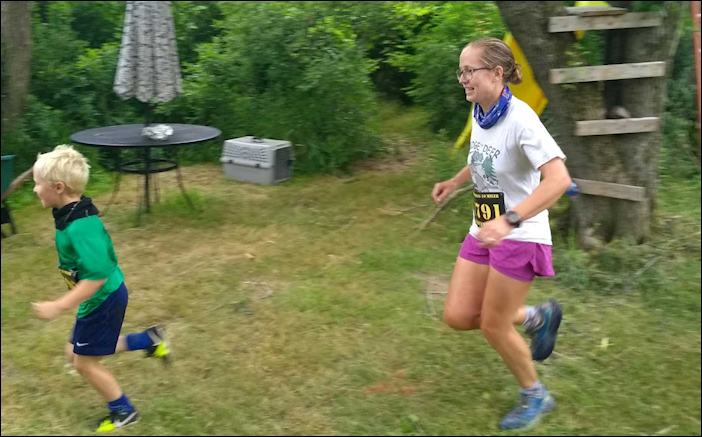 I missed racing so much and I appreciated having the opportunity to do it again. My son Eddie (7) was beyond excited to run a race at the farm. He didn’t want me to start with him but when I caught up to him, we stayed together. I was so proud of him. Sophie (9) ran part of the race carrying a chicken, which is something that will probably never happen again in her life. Other participants commented that it felt so good to be in the racing atmosphere again and were glad we could make it work. I hadn’t realized how much I missed our wonderful running community until I was in it once more. 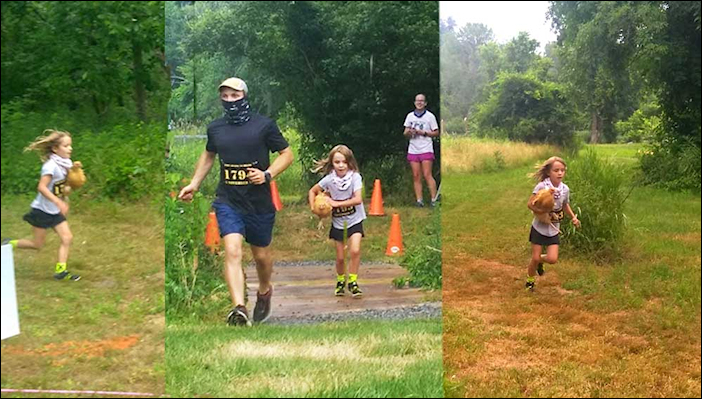 Our family farm stand should be done this week – stop by 6000 Johnston Road, Slingerlands, for some fresh produce!