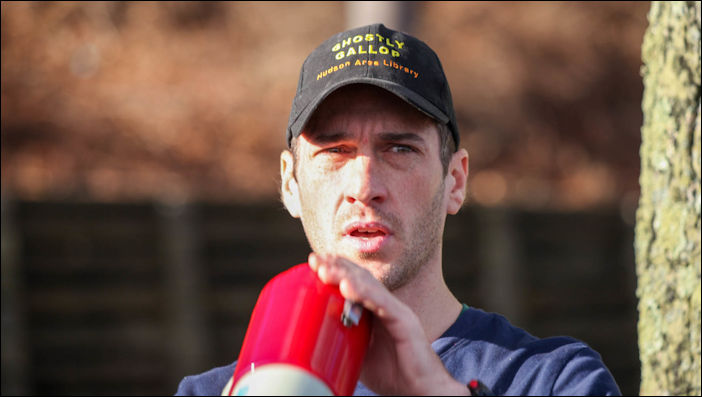 I awoke early on the morning of January 12th to the sounds of what appeared to be a torrential downpour outside my house. I have been a runner for most of my life and I have competed in cross-country as well as road racing for the past thirteen years. I’ve also coached runners in high school cross-country and track & field, and worked with adults training for a variety of events. In that time, I’ve personally raced or coached in almost every type of weather imaginable.  However, today was a different day and a different venture, as I would be directing my first road race, rain or shine. The one thing I’ve learned and taught throughout my years running and coaching is the Boy Scout motto - Always Be Prepared. I would be ready for whatever weather today would bring, whether it was torrential downpours or below zero temperatures.

I prepared as if the torrential downpours would continue, but I was hopeful that things would take a turn for the better. As I gathered my items for the day, I thought about my decision to take over Winter Series #3. In late 2018, the previous race director, Jon Rocco, asked me to see if I would be interested in taking over the duties of directing Winter Series #3. Jon has long been an active member of HMRRC and he decided it was time to take a step back from his race directing responsibilities. He invited me to learn what was involved and I tagged along as a volunteer for the 2019 edition of Winter Series #3. I found it fitting that I would inherit the race from Jon since he was my long time neighbor growing up in Colonie. In fact, in those years it wasn’t uncommon for me to be arriving home from a high school cross country or track & field meet and Jon to be arriving home from an HMRRC event at the same time. We would share with each other how the races went and wish each other well on the next one. On one occasion we had both set personal bests in the 5k. It was a good example to see that if you stayed active you could continue to improve for many years after graduating from high school and college.

After the completion of Winter Series #3 2019, I agreed to take over the responsibilities of directing, and decided finding a good counterpart to co-direct would make it more manageable. I had a few people in mind but I ultimately asked Lance Jordan, my friend and counterpart at Shenendehowa High School, to assist. Our co-direction would provide an opportunity for athletes on the team to learn more about the local running community and to be able to fulfill different volunteer requirements they may have. I believe it is important to plant seeds like this in our youth, as I still remember volunteering during high school at the Mohawk Hudson River Marathon water stop for several years. At the time, the thought of running a marathon seemed absurd (literally, who would want to run 26.2 miles?) but by volunteering I saw people participating in the event and enjoying it! And now, with over twenty marathons behind me, that early exposure proved to be a good way to capture the imagination on what was achievable.

I arrived at the SUNY PE Building at 7:00 am and the rain had stopped AND the temperature was rising quickly! It was looking like a good weather day for race directing, and even a little too warm for actually racing. The first task was to unload all of the refreshments from both HMRRC and Bountiful Bread (Bountiful Bread graciously donates the soups and breads as well as age group and volunteer certificates). Once all the refreshments were inside, Maureen Cox went into action (with the help of Sara and Theo O’Grady) and finished setting everything up. The next step was ensuring the registration for pre-registered and day-of attendees was ready. Mary Bailey and Marcia Adams led the charge on making sure everyone was signed in.

With everything inside (mostly) ready, I quickly met with the volunteers who had already arrived. Originally, the volunteers seemed sparse, requiring contingency arrangements from the original planned stationing of volunteers, but race day luck prevailed and we had a sufficient number. After a brief meeting it was out on the course with Tom Adams and Lance Jordan in the HMRRC truck. It may seem like a small task, but driving the entire course, marking it with cones and signs, and laying out the water stops is time-consuming. We finished around 9:15 am, with 45 minutes to spare before the race start time. By this point I had just enough time to meet with all of the volunteers and dispatched everyone out onto the course. By 9:55 am, it was out to the start line for some last minute instructions to the large number of participants. In particular, it was important to describe today’s new course. 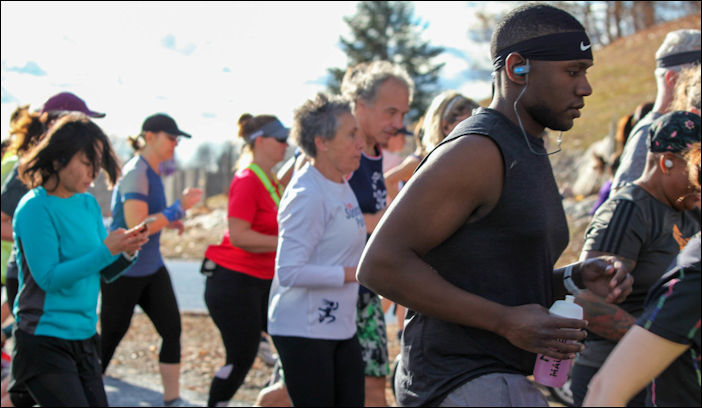 At 10:00 am we readied the runners, counted down 3-2-1, and let out the siren on the loudspeaker. A little after 16 minutes had passed, the first runner in the shortest race crossed the finish line – 14 year old Kaleigh Higgins from Watervliet. Kaleigh confessed she thought she mistook the course – but it appeared everyone following took the same path. So instead of 3.0 miles, the runners covered 2.5 miles in the first race. Some of the runners were delighted with the shortened course, some were confused about being done so quickly, and some just kept running to meet their needed daily mileage. This would be our only glitch of the day, and the longer races were not affected. My son, Conor, had opted to volunteer versus run the shorter distance and he became our ‘runner’ responsible for shuttling the finisher cards back and forth from the finish line into the PE Building. Then the registration volunteers Mary and Marcia took over at with compiling the finisher cards and tabulating the results. I decided to keep the tradition that Jon Rocco had started and awarded the first place male and female finishers of each race with Grandma’s Pies. 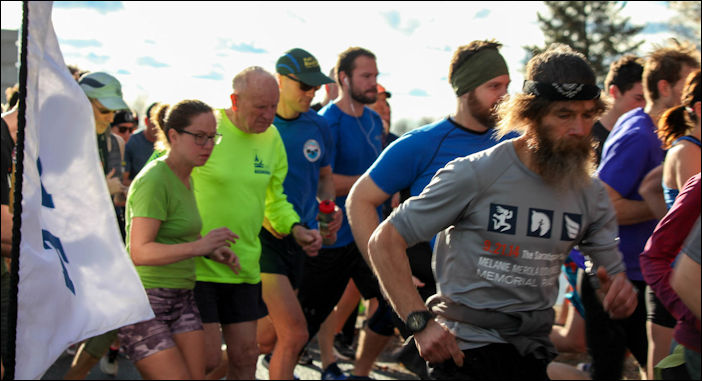 We ended up having 285 finishers in all three races. This was over twice as high as we anticipated from pre-registration and was likely due to the weather taking a turn for the better at the last minute. The last step was thanking all of the volunteers, packing all of the equipment up, and cleaning up the course. When all was said and done, my family left for home, and I changed into my running clothes so I could complete my scheduled 18-mile long run for the day. At the beginning of my long run, I thought back to the Doug Bowden Winter Series the past December, where I found myself completing the race with Chuck Terry and Jim Sweeney. We ‘joked’ that between the three of us, we had a cumulative sixty plus years’ experience at HMRRC events and Winter Series races and we were only in our thirties! Each of us in some form or another had attended our first HMRRC event at least twenty-plus years earlier in the 1990s as high school or middle school students. After participating in so many races, it seemed like a small token of gratitude to accept the position as Winter Series #3 race director. Surprisingly, everything had gone very well, with no major problems, which was a relief. Nevertheless, I could certainly feel the effects of early rising and the cumulative effects of the day as I set out on my own training run for the workout I had planned. I know that next year we may not have luck on our side, so we will use this year’s experience to continue to be as prepared as possible to produce another successful race. 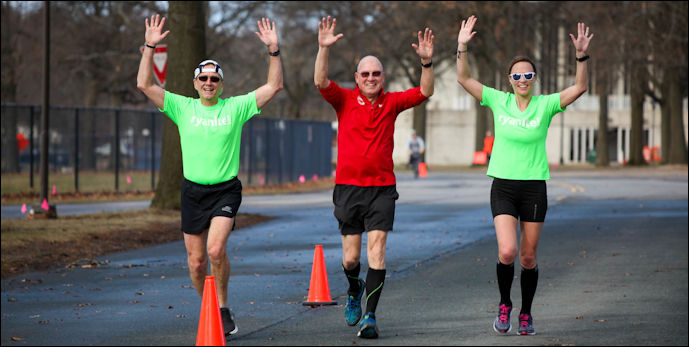