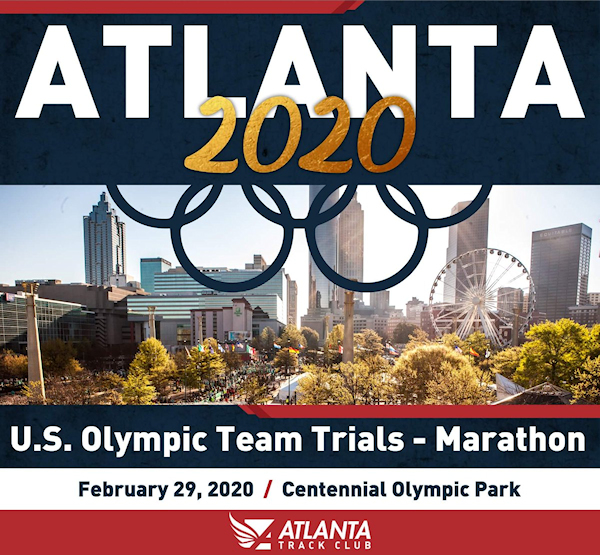 Josh Merlis and I have traveled a number of times together for running related events. Eight years ago we went to Houston for the USA Olympic Marathon Trials so I knew this would be a blast. Josh's wife Michelle would be with us and she is equally fanatical about the national running scene. I couldn't have been happier to join them. 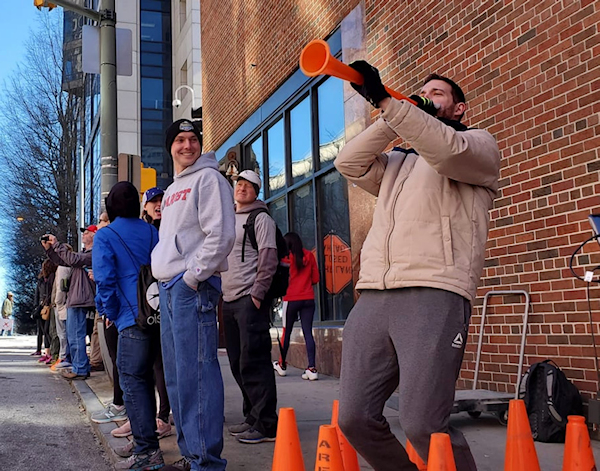 Once we arrived in Atlanta, Nick Webster, now living in Charlotte N.C., joined us, along with my childhood friend Jim Roe and his wife Joleen. They now reside 2 hours from Atlanta. On Wednesday evening prior to the race, Katrina Josberger, a young woman I coached in high school, called to see if I would be in Atlanta. After graduation, K.J (as I call her) went on to West Point, graduating in the spring of 2019. She is based outside of Atlanta, so she also joined us on the streets of Atlanta.

Jim Gilmer, one of Josh's friends, was driving to Atlanta so Josh asked Jim to swing by the ARE office and get Josh's P.A. System, a generator, and dolly so that Josh could play music along the course. Our Airbnb was perfectly situated at the intersection of Peachtree Street and Marietta Avenue, where marathoners would pass through on four different occasions. When Josh wheeled his P.A. system into the center of the intersection, course marshals asked Josh what he was doing. He said, “I am going to do sound for the race” They greeted him with welcoming arms. That turned out to be one of the highlights of the event for not only the runners, but for hundreds of spectators. Josh blasted music for the crowd. Using the USAT&F app on his phone he would track the runners, announce all of the individual splits, what they ran their last mile in, regardless of their place, and kept the hundreds of people updated as to how the race was unfolding when not in our view. When the runners were in our view, the crowd would explode with excitement and cheer accordingly. 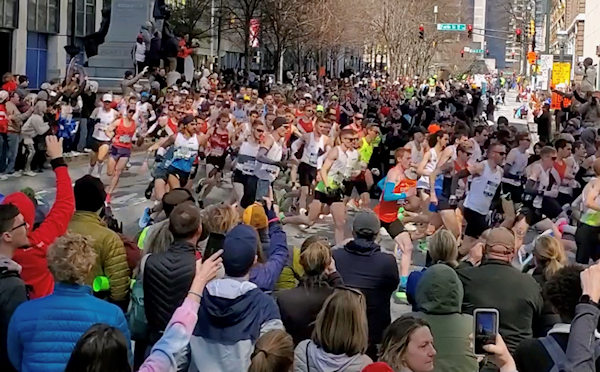 The men's race started 12 minutes prior to the women's race. Soon the men would come up Peachtree (on the outside lane), go up Marietta for just over ½ mile before looping around the median in the road and returning back through the intersection in the opposite lane. Not long after the men passed through the intersection that second time, the women came steaming up the road, passed by the first time, then returned a mile later. Josh had struck on a novel idea, as we were to learn that the only music and sound on the entire course (outside of the start and finish areas) was provided by him. His announcing of the race via the app kept hundreds of fans keenly aware of how the race was unfolding, making it more exciting when runners passed through. Josh would announce many of the runners by name. 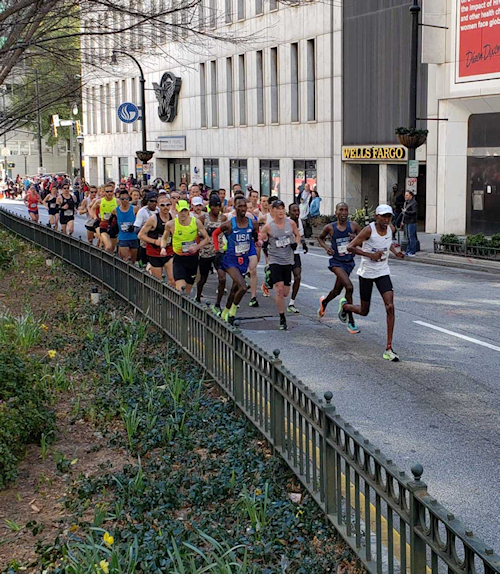 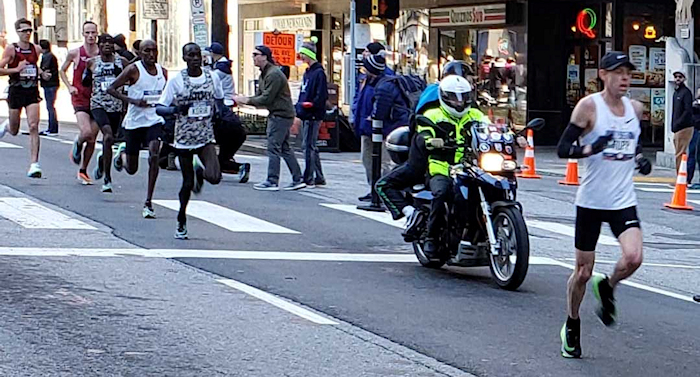 It wasn't long before the men's race came through again at mile 15, then looped around and passed back through at mile 16. As the runners came through at 16 miles, Galen Rupp had made his move, and it was to be the decisive winning move. I was lucky to capture a photo of the moment.

Capital District runner Jacob Andrews, who was in this race, was moving up all day long. Each time he passed through he looked better than the time before. 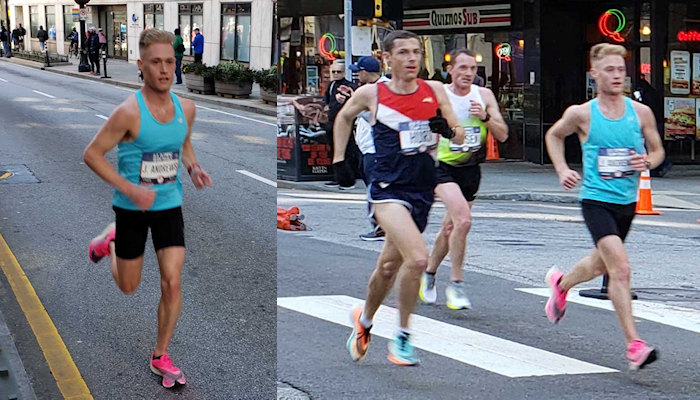 Soon after the men's race had passed, the lead pack of women came through 10-12 runners still remained in that group. They had all come with their A game and this was going to be a terrific finish.

It was electrifying as the runners would pass by us, head up the road to a turnaround and then file back past us again. Albany's Karen Bertasso was looking solid and strong despite the never-ending hills (1300 feet of total climb and 2600 feet of elevation change) and intense winds. 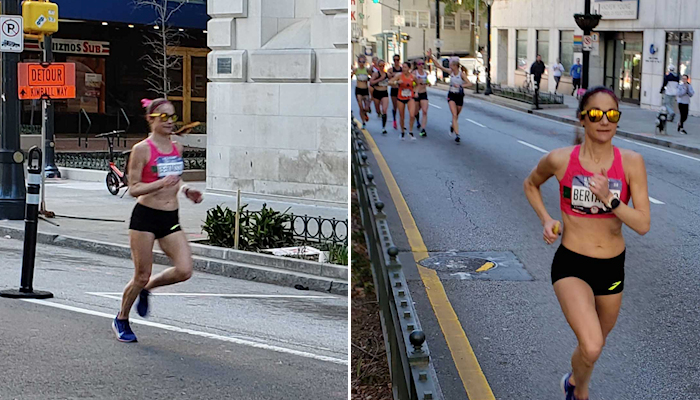 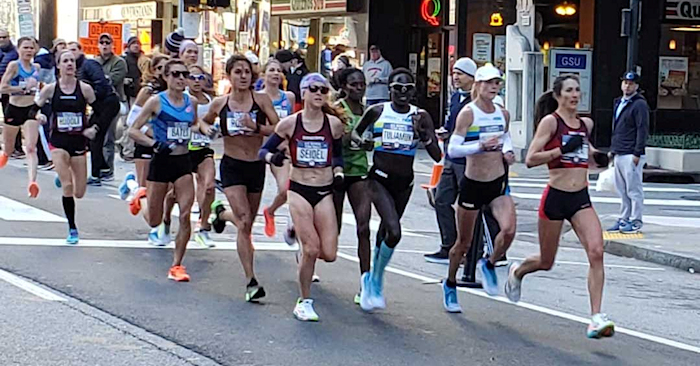 Once all the runners were through the intersection for the final time, we loaded up the P.A. system and generator on the dolly and rushed 5 blocks to the 25 mile mark. We got there moments before Galen Rupp ran by with the race well under control. But less than a minute later the second pack of 3 ran by, battling for the last two spots on the Olympic team. Jacob Riley, who was 30 seconds back with only a few miles to go, would be one of the big surprises. But Abdi Abdirahman making the team at age 43 was maybe the most pleasant surprise. It was a battle that wouldn't be decided until the final meters of the race, and Leonard Korir was the odd man out, finishing fourth.

The women's race was equally exciting, as Aliphine Tuliamuk passed by with Molly Seidel hot on her heels. This was Molly's first marathon, as she qualified for the trials with a 1:10 half marathon. Then it was Sally Kipyego, followed by Laura Thweatt and everyone's favorite, Des Linden. Desi clawed back a big gap to catch Laura and creep into 4th place, but she ran out of race, trailing Kipyego to the finish by 11 seconds. The big hill just prior to 25 miles forced some of the runners into a walk. It was humbling to see some of America's best distance runners have to stop and walk, either from exhaustion or severe cramping.

Five times in the past I have gone to the Olympic Marathon Trials. Each and every one has been very exciting. The big difference is that the USAT&F has gotten better at designing courses that are fan friendly and easy to watch. Despite the Atlanta course not being runner friendly, it was very fan friendly, and for those of us huddled around the intersection of Peachtree and Marietta, Josh made it even better. Atlanta was by far my best experience. 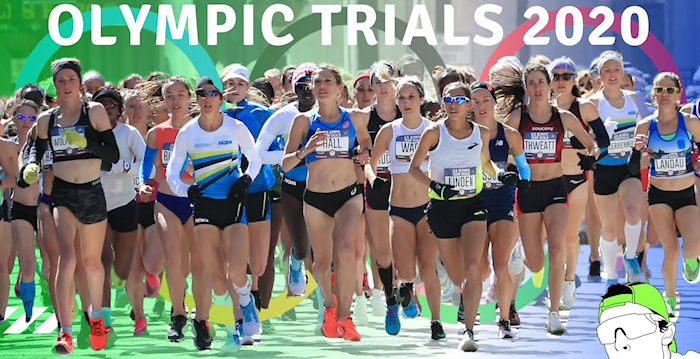 Will it Hurt to Miss the Workout

How to Make Winter Running Work For You

The Over Racing and Under Training Syndrome

How to Run Smart in Heat

It's Not About the Weather, It's About How You Dress

Coaches Corner: After The Work(out), The Rest Is Easy