So, the World is Ending: What does that mean about my races and running? 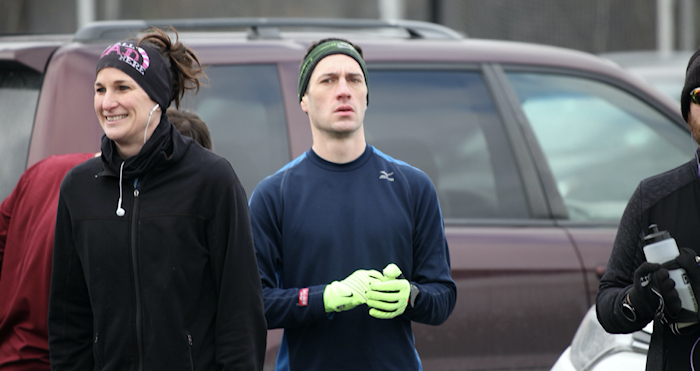 The disruption caused by the Coronavirus in 2020 is already unprecedented. The impacts of the virus and illness (COVID-19) that it causes will be hard to quantify in the near term and hard to predict in the long term. As the world has come to an apparent standstill, there are a lot of things on people’s minds. While health, safety, and economic viability are of paramount importance, for someone paying attention to the running world it was also noticeable to see how concerned people were about their races. Many races and organizations made the right decision and quickly heeded the warnings coming from health agencies and officials and cancelled or postponed their events. Others waited and chose to take a “what if” or “we’ll see if this clears up” up approach before being forced to cancel or postpone by local and state officials.

The first race on my calendar affected by the pandemic we are faced with was the New Bedford Half Marathon, which was to be held on March 15th. Unfortunately for me my entire peak month of racing was quickly wiped out in a day or two – New Bedford Half (3/15 – cancelled), Cherry Blossom 10 Miler (4/5 – cancelled), and Boston Marathon (4/20 – postponed). For someone with training in epidemiology and who had been watching the news, the writing was on the wall. So it was a relief that these races were cancelled. I was already struggling with the decision of whether I felt safe racing if anything was in fact held and had loosely planned to not race all out or completely eat the costs associated with racing and traveling. With two of the major race cancellations that I faced, the organizations also made it known that without holding the races they may also not be able to continue. This was disheartening to hear because both New Bedford and Cherry Blossom are large, highly competitive races that attract top competition from around the country (in Cherry Blossom’s case, from around the world). They keep entry costs low (New Bedford - $68, Cherry Blossom - $48) by being well organized and offering a large bang for your buck. The experience at each race is top notch whether or not you are elite, and there is no “paying for VIP” service that other races have begun charging. In the case of the Boston Marathon, there was a swift message that they would postpone and then a release moving the race to September, followed by a declaration that Patriots Day would be moved to September. The logistics involved in moving such a large event in such a short amount of time must have been massive.

So, my thoughts: I made the right decisions with the races I chose. And I hoped the two large, longstanding races I planned to run would continue to be held in the future. I was disappointed I would not get to utilize my race fitness. But then I shifted to begin reducing my mileage. I dropped my mileage by about one-third and shifted my workouts, so they were not as strenuous. The goal was to use my fitness to my advantage to stay healthy if I would not be racing. I also used this same advice with the athletes I coach. It made no sense to compromise your immune system when a pandemic was spreading and no races would be held. My advice was also to stay calm – the races were cancelled because they would have been dangerous for people to attend. The race fees would be sorted out on a race-by-race basis. Eating some pre-spent costs would be necessary, but that usually happens when a person is injured or has last minute work or family obligations come up.
The ability to social distance and plan to do anything else (hike, trail run, etc.) also quickly encountered many problems. It was difficult to go to a park or bike path in the first week of the pandemic without seeing many cars in the parking lot and people out. Those walking around keeping a distance were following protocol. But it didn’t make any sense to run in these circumstances, so I largely tried to go during “off hours” or avoid common running spots all together. Trail running also became tactically difficult. My first “plan” after race cancellations was to finish the ADK 46 or Catskill 3500 mountains that I had not yet done. Any trips to the Adirondacks or Catskills for high peak adventures always come with some amount of inherent risk. Then the official word to keep clear came. It’s understandable for anyone to be drawn to hiking or the mountains during this time. But I decided to postpone those plans as well.

While what we are experiencing currently is on a level that is unprecedented, many of us have experienced disruption in our lifetimes by proxy or personally including September 11th, the housing market collapse and financial crisis of 2008, and the Boston Marathon bombings of 2013. I can remember 2013 well because I ran in the Boston Marathon that year and had many friends and teammates also racing. If a race catastrophe was not enough for 2013, I can remember shortly before Christmas in 2013 reading about the first index case of Ebola Virus in Guinea. So, in 2020 it seems we have a running and public health catastrophe in the same year. In the weeks after 9/11 and Boston Marathon 2013 there was a real sense of “we are in this together.” Many people likely took up the sport of running in 2008 to relieve the stress and pressure of financial problems. Taking a similar approach in 2020 for COVID-19 of “we are in this together” will surely help stop the spread of illness and ensure that we can get back to racing as quickly as possible. 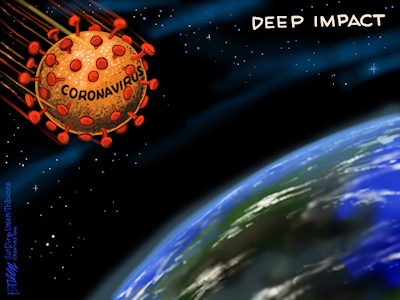 Cartoon by Steve Breen from the San Diego Union-Tribune