Karen Bertasso: The Path to the 2020 Olympic Trials

by Christine Bishop and Karen Bertasso 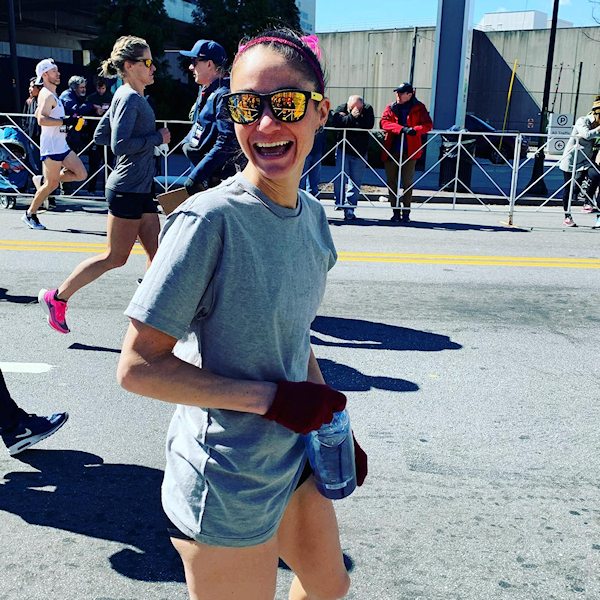 In 2013 my goal was to break 3 hours in the marathon. Once I accomplished that goal I wanted more.  My coach and I decided to aim around mid 2:50s for my next marathon later that year. By the end of the year I ran 2:50 flat, and we realized then that I was within striking distance of an Olympic trials qualifying time.  In the spring of 2014, we focused on the half marathon to gain some speed, in which I ran 1:18:28, a PR at that time.  That fall, I targeted the Hartford Marathon with the focus of running mid-2:40’s.  I successfully ran 2:45. Next up was the London Marathon.  In London, I went after sub 2:43, but went out much faster than that (lesson learned).   It also rained, the story of my life. It rained in London, it rained in Hartford both times I ran, at CIM, and then it rained again in Berlin. Some very active clouds followed me.  Still, my coach and I didn’t want to rush my training. Patience and hard work were the keys. Then in Hartford 2018, I did it: I qualified with a time of 2:43:46. 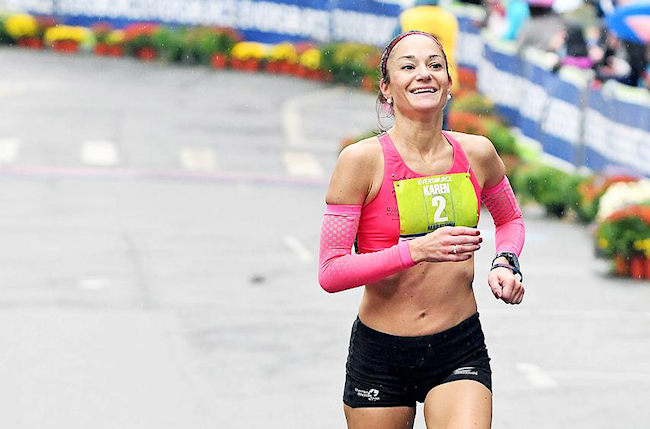 Karen ran the Hartford Marathon in 2014 and placed third with 2:45:45. At that time, the Olympic trials qualifying time was 2:43:00.  In December of 2015, she ran California International Marathon (CIM) and was on pace to run sub 2:43 until her knee flared up.  She finished in 2:46. Only a few days later, the IAAF and USATF made the decision to change the standard to 2:45 with less than 6 weeks remaining in the qualifying window.  Karen felt she would have paced herself differently and run the qualifier at CIM had she known. The next month she lined up at the Houston Marathon for one final shot for the 2016 Olympic trials in Los Angeles.  She ran 2:46 again only 6 weeks after running CIM.

Her long quest was finally achieved in 2018 where she again PR’ed at the Hartford Marathon.  In between, she has run many marathons across America and in Europe.  In 2015, she ran a rain-soaked slog in London that earned her first place as an American and 37th overall, but with a time that was 3 minutes longer than she had hoped.  In Berlin in 2017, she placed 33rd overall, but again fell short of her goal.  Fast forward to the rain soaked Hartford Marathon course on October 13, 2018, where she came in 2nd with a time of 2:43:46 and pace of 6:16 per mile guaranteeing her inclusion in the USA Track & Field US Olympic Marathon Trials in 2020, the race that would decide the team for the 2020 Olympic Games in Tokyo, Japan. New England Runner columnist Bob Fitzgerald wrote, “Hurrah for NY’s Karen Bertasso! One of the nicer people on the circuit, the Willow St. AC ace’s fastest time prior to today was 2:45:45 run here four years ago. The quest for a trials qualifier has been paramount since.”
ADK Sports Interview 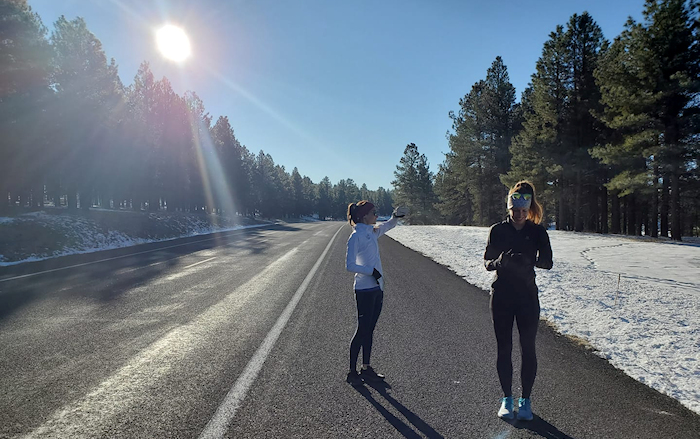 My training didn’t change much since we weren’t going to reinvent the wheel. We stuck with what worked before, a mid-week workout and a hard effort long run of some sort. In addition, I spent a couple weeks at altitude in Flagstaff, Arizona. Michelle and Josh Merlis spent several days with me and my husband, Mike, also came out for a long weekend both of which helped carry me through my time there and all the training by giving me that important connection to home. We adjusted my paces for my workouts at altitude and had to condense our training cycle a bit. Week 2 into my cycle I had unexpected, emergent surgery, which really threw me for a loop.

I have been sponsored by Brooks since January 2019 when they reached out to me for an Olympic Trials project. I also received support from Willow Street Athletic Club from Ray Newkirk, for which I am grateful. Nike gave all the runners a pair of Alphaflys before the race, which was a really controversial subject. I have them in an unopened box in my closet. 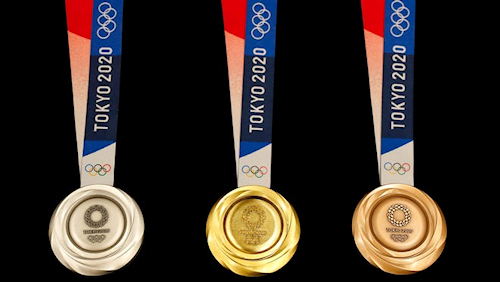 The Atlanta Track Club did an excellent job. They put us up for three nights and paid for all our meals, including athlete dinners at the Coca-Cola Factory and the Aquarium. Also, they offered a $300 travel refund if we wanted to share a room with another athlete. They definitely went above and beyond to host these many talented athletes.

The race was extremely difficult and deemed the hardest competitive marathon course out there. The wind conditions were brutal and a lot of the time during the race my mantra was, “Just get my damn medal.” So, when we crossed the finish line and there was no medal, we looked for some volunteers to help us and they informed us they were only medals for the top ten finishers! We also didn’t get a shirt. I loved the Atlanta experience, but couldn’t help feeling a bit disappointed at not having a physical reminder of all the hard work and the experience of being there. It’s a feeling that probably many runners have had- the medal or the t-shirt that represents not just a race or goal achieved, but also the many hours of hard work that go into achieving that goal. 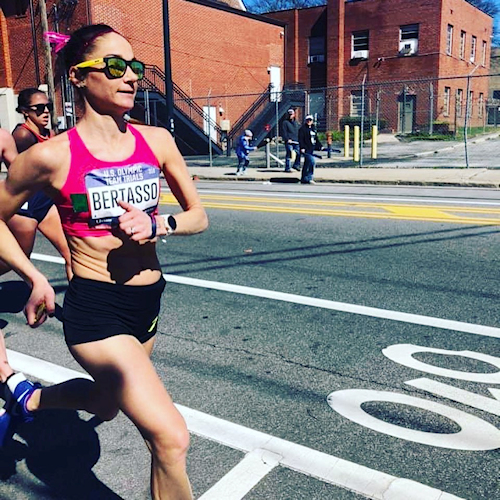 Now to the race: The men started first shortly after noon and the women started at 12:20. We were broken into four corrals, with the majority of us being placed in the fourth. There was no net time. The start was so crowded that we came to a complete stop breaking ourselves with our hands on each other’s back about a 1/3 of the way into the first mile. At the first turn, everyone put their hands up to indicate which direction we were turning, several athletes took a fall at this point. It was definitely a challenging start. The course was three 8 mile loops with an added 2.2 miles at the end. Technically it was the most difficult marathon course ever. We were either running up or downhill. There were no flat sections. The hardest part was the last 2.2 miles. There were big hills in the last 2 miles and I remember at mile 25, there was another big hill and as soon as it crested, we were on an overpass that had the worst headwind ever. The hills were an obstacle, but the wind was the hardest part. It was so strong that I was being knocked sideways.

The course was designed to be difficult to mimic Tokyo’s brutal course. Ironically, Tokyo later changed the venue to a flat course but that was after Atlanta had won the site contract. The winners at the trials were basically the best cross country racers in America, a skill that is not needed for the Tokyo event. Will our top six winners excel on the flat course? That is the question and in addition it will now be a year later due to COVID-19. So, the race will be unpredictable but very exciting.

I knew it would be tough, but I felt a little too good the first loop. I was too eager in the beginning and my GPS was slightly off so my watch did not help. There were times when I thought I was slow and then found out at the mile marker I was actually too fast. I was wrapped up in the adrenaline of the moment and what felt easy in the beginning was not as the race progressed. In addition, I was having issues with my stomach around mile 8, I took an Imodium and at mile 18 my stomach really started to bother me. I had to stop for a porta potty break and during the last mile I became seriously nauseous and puked 5 times. This was not what I wanted. 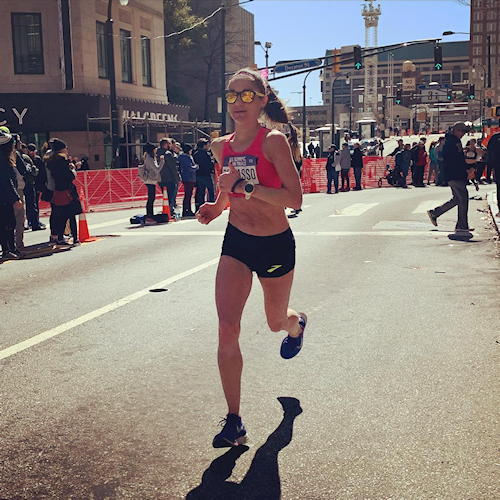 I finished; something 61 others cannot say, and I finished ahead of 87 other runners who represent the elite of America. What can I say? Runners are high achievers and so often feel that their results are not what they wanted or feel they could have done better. But, I was happy with many elements of my race. I beat my seed and that was my goal. After the race when I looked at my splits, it showed how many runners you passed or how many passed you. At mile 23, when I stopped to use the porta potty, I could see that 20 people passed me. Looking back, I could have finished higher but at the end of the day, it is a remarkable experience and I overcame a tough course and other adversities and finished. Those are things to be proud of.

One of the most exciting things of the event was that every inch of the course was packed with cheering spectators. We had our last names on our bibs, but I kept hearing my first name all over the course. It gave me great feeling. Then afterwards I found out that many of my friends were there from college and people who knew me from other races. Josh Merlis was there with a sound system and wildly cheering me on every time I passed by. During the first loop I had difficulty finding my husband and parents in the crowds but during the second lap, I spotted them and that encouraged me. Joe Benny (the Mayor) organized the Albany fans afterwards so we could celebrate with food and drinks together, that was special and those are memories I'll never forget.

What next in a COVID-19 World?

Boston was originally next, so I jumped back into training for Boston immediately after the Trials and then everything changed. I took some down time but am now getting back to training but with a little less mileage. My aim is to stay in shape and maintain a decent speed. It’s difficult to predict what will happen but I am hopeful that if everything shapes up for the fall, Boston will be on my schedule. In addition, Helderberg to Hudson is on my schedule which is to be held 16 days before Boston. 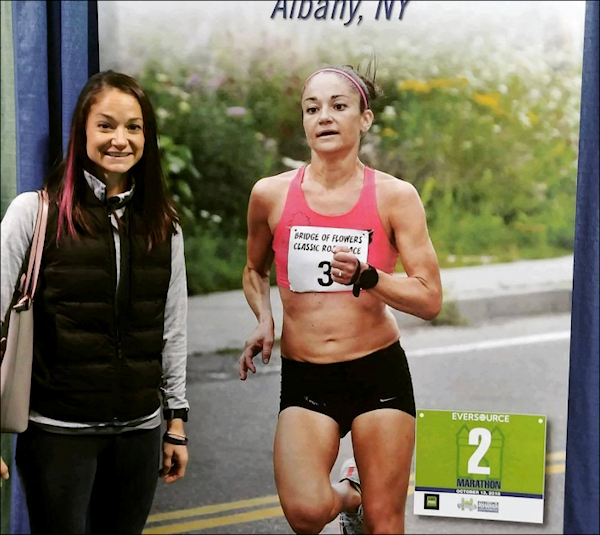 Next to my banner at the Hartford Marathon

The Beach to Beacon 10K in August, is on my bucket list. Also, the Broad Street 10 mile in Philadelphia, a very fast 10 miler. However, more importantly is my bucket list goal, a faster marathon time. I know I have it in me and that I am capable of doing better and will continue to pursue it.

I want to thank everyone who supported me in the Trials from friends to people in the community. It was heartwarming to get so many messages and responses, some from people who have been following me. That was very motivating.  Thank you, Albany, for your support. It meant a lot to me.

Before the big race, a break to train 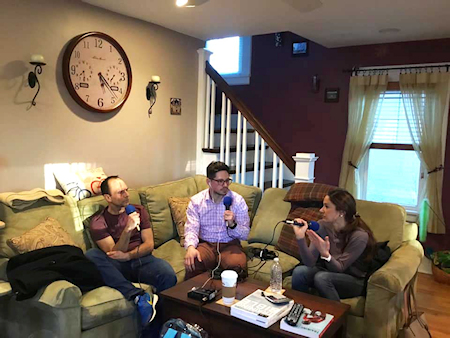