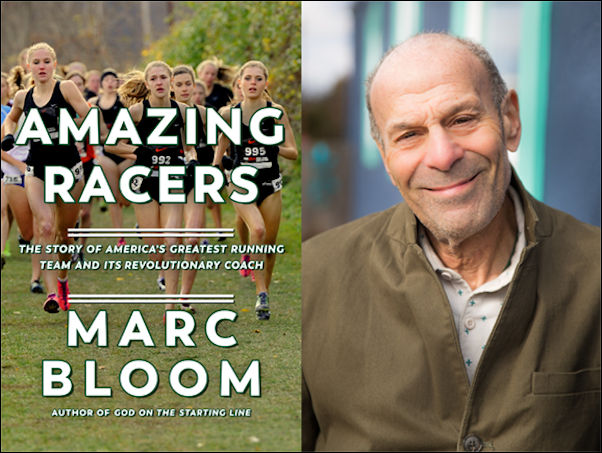 Fall is here and that marks the start of cross country season, a season that is a favorite for many distance runners. Any distance runner is likely to know that the Capital Region area stands out as one that consistently produces some of the best high school distance runners and cross country teams in the country. There are several other very strong cross country programs in New York State outside of the Capital Region. Just in time for the fall season a new running book Amazing Racers: The Story of America’s Greatest Running Team and Its Revolutionary Coach by Marc Bloom chronicles the success of one of these teams.

The book covers the rise of the Fayetteville-Manlius (“FM”) boys and girls cross country team since the turn of the century with an emphasis on the ten years spanning from 2004 through 2014. The prologue chapter entitled “Broadway Bound” tells the story of the boys FM team arrival to compete at the Manhattan Cross Country Invitational in 2004 where the team accomplished an unprecedented feat by placing their five best varsity runners based on scoring results in the top five positions of the race. This unheard of feat was accomplished while FM was still a relatively unknown program at the national level and in a race that included top teams from around the county.

After the initial story the book fast forwards to the day of the 2014 Nike Cross Country Nationals (NXN) in Portland, Oregon. The chapter sets the mood for the meet, explains Bill Aris’s, FM’s coach. We learn that Aris and the FM squad are in the midst of a special season and have the potential to capture both the boys and girls Nike Cross Country National team championships. Such a feat is unprecedented.  The final pages of the first chapter explain why accomplishing a single title let alone a boys and a girl’s championship is so difficult in a single cross country season.  Do they both win? You’ll have to read the book to find out.

From the opening prologue and first chapter the reader now wants to know more about this championship FM team and their coach. The book takes a step back and describes the early 2000s and how Bill Aris and the FM Cross Country program came to become intertwined. In chapter three we learn exactly how the team surprised the HS running world with their five man sweep at the Manhattan Invitational in 2004. Despite the shock of these wins, those who had been paying attention would have seen a core squad put in a lot of hard training during the summer before the event. In addition to hard work the team emphasized nutrition and sleep, and especially on building each other up while reinforcing the accountability of team members.

From that 2004 team a “running machine” was born in the FM region. In addition to continuing success at the high school level, the coaches, Bill Aris and his son John Aris, would secure a Nike contract and begin an elite training program that took the name “Stotan Running” from the team’s and coaching staff’s core values.  Each year presented new challenges for FM and Bill Aris. Some years either the boys or girls team lacked depth at the critical fifth, sixth, and seventh spot. During other years, team cohesion, injury, or illness would be a factor in for either the entire season or for specific important races. Several of the chapters include highlights of FM’s races against great teams and individuals from the Capital Region at the New York State and Federation meet as well as at the Nike Regionals and Nationals race.

So did the boys and girls team go on to win Nike Nationals in 2014?  If you do not know, you can pick up a copy and finish it before the end of the 2019 cross country season! Tom O’Grady, PhD, MPH of Slingerlands is an
avid runner, hiker and lover of the outdoors.