What Makes Anthony Tick? Certainly Not a Garmin Watch! 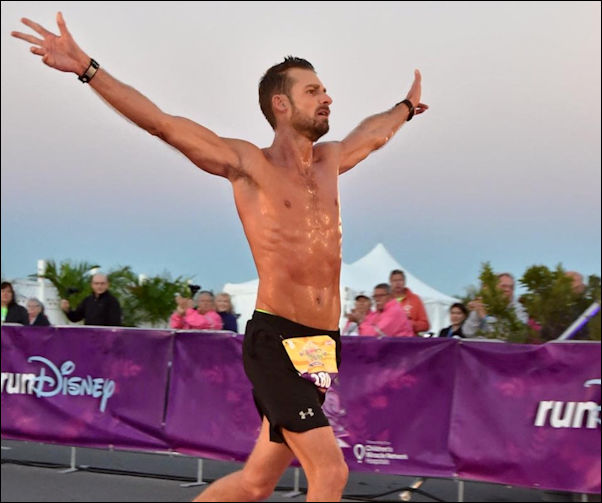 Anthony Giuliano isn’t obsessing over splits in a race. He hates that. What are mile times worth when you’re trying to break the tape?

No, he’s hunting the runner in front of him, if there is one. If he’s running his hardest, splits don’t matter. A watch is a distraction. His goal is to put every other runner in his wake.

Maybe, he says, he runs angry – at anyone who ever doubted his ability to bounce back, at people who bring up his age, at himself anytime the tiniest part of him wants to give in.

We all know what separates good runners from people who finish first, and it’s not their legs. Giuliano was a good runner in high school, but he’s a better runner at 40 because he has tackled the mental part of the sport. Getting there is harder than a track workout that leaves you doubled over at the end. He now knows that he can win races. And he knows how much all-out training he has to put in to not just be the best master’s runner on the course, but the best runner: period. 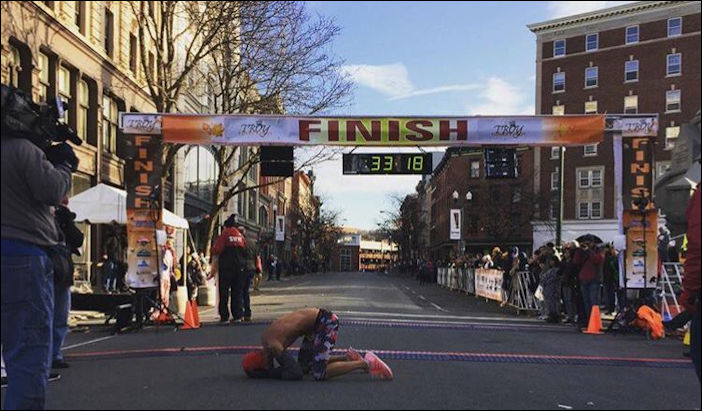 In May, the runner from Niskayuna won the Bacon Hill Bonanza 10K, beating runners who were younger by at least seven years. He’s won the Father’s Day 5K in Troy for three years running – 2017, 2018, and 2019. His proudest moment was winning the 2017 Troy Turkey Trot 10K, a long-held goal, in 33:08, nearly half a minute ahead of the second-place finisher.

“I feel like some people get in the mindset, ‘Well, I’m 40. I can’t do that anymore.’ I’m 40, and I’m like, ‘I’m going to keep going as long as this ride runs. I’m going to keep rolling until we’re not rolling anymore,’” Giuliano says. “I’m not a great runner. I’m a great competitor. I am competitive no matter what, whether it’s beer pong or air hockey. I am competitive. I want to win, and that’s what it is.”

So he’s always hunting the fastest person, whether he’s on a 5K course or on a training run, where he never runs slow even when he’s running for distance. He limits his miles to around 40 a week, he says, so there’s no room for “garbage miles” that aren’t run at an aggressive pace. He strength trains, watches what he eats, and swears by routine massage therapy.

He wishes he would have run competitively in college. He had the opportunity, but his focus was elsewhere. Sometimes, he thinks about the times he lays down now, and wonders what he could have done with the same mind in a 20-year-old’s body. But that’s history now, and though he was always a competitor, building a runner took time. 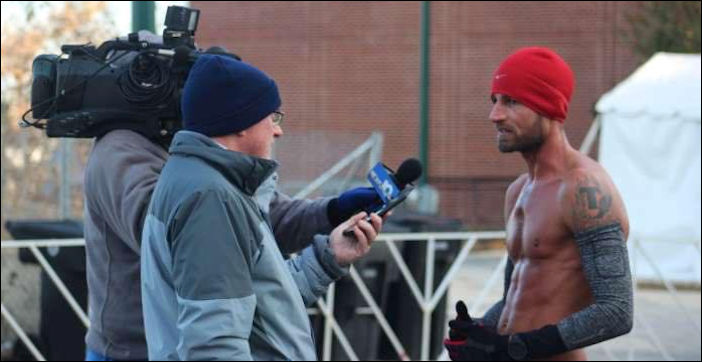 His own history with running started with middle-school cross country. At first, he didn’t want to put in the work to win, but he got serious around 10th grade at Colonie High. Just before his senior year, he connected with David Twarog, a Niskayuna-based coach.

After high school, Giuliano fell away from racing for a while, absorbed in a day job, and going to the gym to strength train and stay in shape. Then around 2005, a co-worker in his 50s noted that Giuliano had a runner’s body, and they started running together at the YMCA. In 2007, Giuliano finished third in a 5K, and the competitor in him could not be stopped. He placed in the top 30 at the Workforce Challenge, and then won a 5K after that, and then another one. Having a taste of success and wanting more, he started training with Twarog again from 2007 to 2010, and Twarog said he noticed a different runner than the teenager with natural ability he once coached. 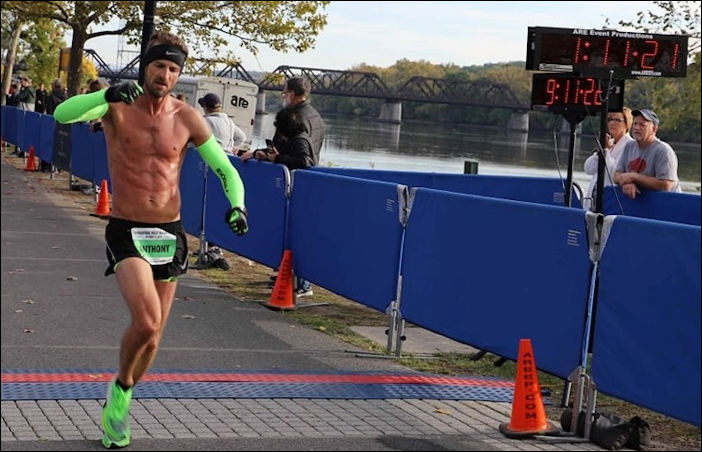 “I think the hunger came later, because he was talking to me differently. ‘I gotta win this turkey trot.’ He started really getting specific and pinpointing races, and I’d go, ‘OK, now we’re ready to roll. This is the stuff that I wanted to hear. Now you’re going to train like a madman,’” Twarog remembers. “Anybody can lose, but to win, that takes a lot of effort. Tony, as he got older, is realizing that it’s more psychological than physical. I believe now he knows he can win.”

In his senior year, Giuliano was the top runner on the team. His 5K PR was a 16:09. “I had a coach say to us, and I remember it to this day, I remember him saying, ‘You’re never going to be as good as you were in high school because you’re doing it with a team,’” Giuliano says. 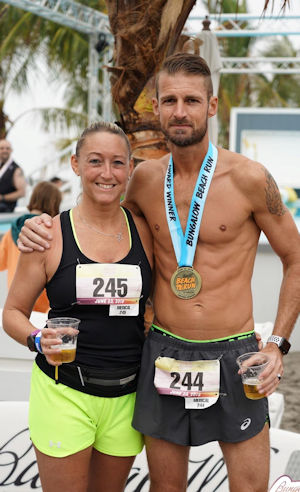 She’s watched him have hernia surgery, a stress fracture, and hamstring trouble, but nothing has ever damaged his fire to compete. And she was at the Turkey Trot in 2017, watching with his parents when he broke the tape and finally realized a dream that has motivated him for years.

“Tony has to be the most focused and determined person I know. He has goals and he knows what he needs to do to achieve them. Sun, rain, snow, hot, cold – it doesn’t matter, he gets his training runs done,” she says. “The Turkey Trot win was the best win of his career. He’s won many other races, bigger races, but to him the history and meaning of that race, the others don’t compare. It was emotional for the both of us. I am there every day, I see the hard work and dedication he puts into his workouts, for months, and to see all that pay off for him, at a race that means so much to him, it’s a memory we will never forget and (always be) thankful for.”

But the competitor in Giuliano didn’t retire with that win because there’s always a way to improve, more goals to chase. And there’s more fire left in this runner, who in a sport centered on numbers, doesn’t care about the one listed under age on his registration form but what the clock says when he crosses the line.

“If I won the lottery, I’d go back and go to college and still have four years of eligibility left,” he says.

Run for the River 5K

Run For Your Shirt Off 5K 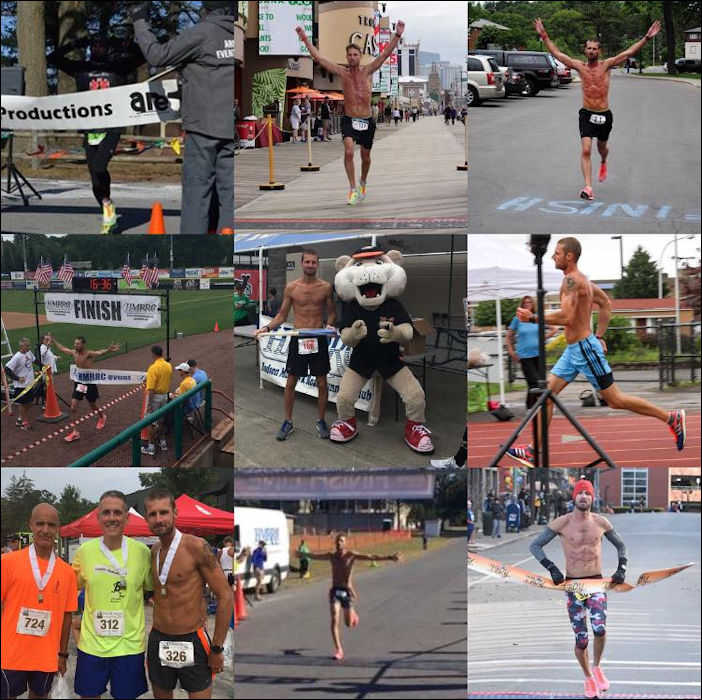