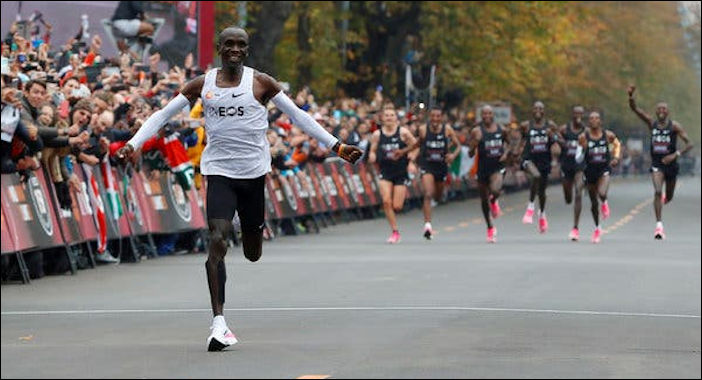 Recently I wrote about the previous attempt by Eliud Kipchoge and Nike to break two hours in the marathon on the Monza Formula One racetrack in Italy in 2017, and his follow-up world record in Berlin. The article discussed the progress that had been made towards the goal of getting a person under two hours in the marathon and predicted when the feat may be accomplished.

On Saturday, October 12, the INEOS 1:59 Challenge lived up to its billing as Eliud Kipchoge was the first person to record a marathon time under two hours. The feat occurred not only many years before many speculated that the mark could be broken, but decades before. Every aspect of the event itself was painstakingly planned, and the overall success of such a concerted effort in a relatively short period of time is an athletic testament to human willpower.

The INEOS 1:59 Challenge itself is a continuation of the initial Breaking Two Project conceived in 2016 by Nike. At the time, the company speculated that under the right circumstances someone would be able to run under two hours in the marathon. Nike first recruited some of the top distance runners in the world. Of the group, three runners were picked based on their unique speed and endurance capabilities. Of the three individuals chosen to make the attempt, Kipchoge was the one who came within reach of breaking two hours. In an effort to help the runners as much as possible, Nike invested a lot of money in research and development. The result was the Nike Vaporfly 4%, which touted a unique combination of cushioning and energy return that increased efficiency and decreased fatigue. 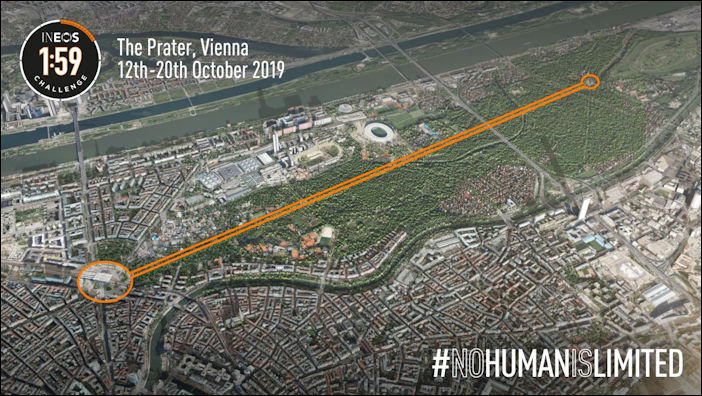 The INEOS Challenge was no different than the Breaking Two Project in the surgical precision directed at every aspect of the event. The weather at the Monza race track became a little warm and sunny in May. Nike solved this problem by moving the event to October. The location of Vienna, Austria was chosen because of the Hauptallee Park area, known as “the lungs” of Vienna. This park has shaded covering from trees, and the eight-day window Nike and INEOS (one of the world’s largest chemicals company) chose for the event had a perfect average morning temperature of 45° F. The course through the park that was chosen consists of two long 4.3 km flat stretches of road parallel to each other that are connected on either end by two large roundabouts. The course had an elevation change of less than eight feet and the roundabouts made the turns smooth, unlike sharp road turns in traditional marathon races. Finally, because Kipchoge noted that he missed the presence of a crowd at the Breaking Two event, the new location offered support from over 100,000 onlookers.

From the second the gun went off, it was clear that Kipchoge was prepared for the race and in a complete state of flow. At exactly 180 steps per minute and with perfect form, Kipchoge settled into 4:34 mile pace behind a v-shaped group of five pacers, and in front of an additional two pacers. The seven pacers and their v-shape were chosen because testing in a wind tunnel had indicated that this would provide optimal protection from the wind to Kipchoge. A laser grid from a pace car traveling at exactly two hour marathon pace made sure that the pacers stayed in formation, and painted yellow lines were provided to ensure Kipchoge stayed on course and traveled the exact distance. Fluids provided to Kipchoge included the new supplement Maurten. Maurten is a supplement using a hydrogel to encapsulate carbohydrates, designed to maximize the amount of energy a person can consume. The hydrogel coating protects the stomach and titrates the absorption of the energy to reduce intestinal problems. Kipchoge was wearing a customized prototype of the newest iteration of Nike’s Vaporfly racing shoe called “Alpha Fly”. This shoe has many design features that maximize energy return and runner efficiency, including a spongy material Nike calls React foam, a long carbon fiber plate that runs the length of the shoe and tilts the runner forwards, two smaller carbon plates in the forefoot, and pods in the forefoot filled with a proprietary substance. 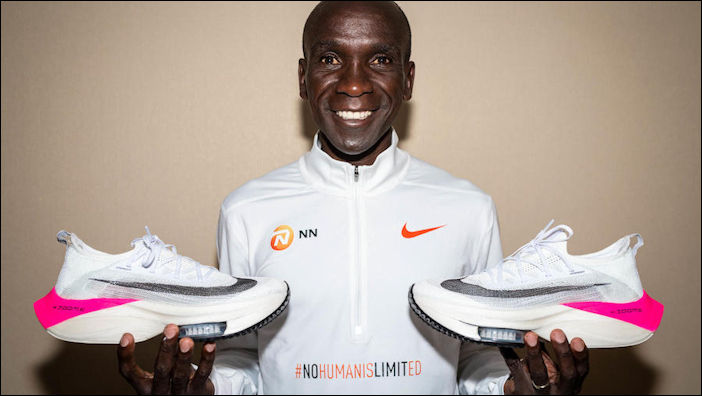 With less than two minutes left in the event, it became evident that Kipchoge would break two hours. He waved off his pacemakers, surged forward with increasing pace, and began raising his hands to bring the crowd to a roar. To be there in person must have been exhilarating, as just watching the feed brought goosebumps to your skin.

A lot has been said about the event, including that it won’t count as a world record, that it was sponsored by Nike and INEOS, and that the sneakers Kipchoge wore gave him an unfair advantage. The event was never set up to officially break the world record. The goal was to push the limits of what a human can achieve over the marathon distance. The event accomplished that goal, and much like breaking the four minute mile on the track, demonstrates that it is possible for someone to run 42.195 KM at 4:34 per mile. Doubters can say what they may, but the beautiful thing about running and its universal access is that anyone is welcome to go outside and try and hold a 4:34 mile pace for as long as they can. Whether the shoes or pacers made an impact is also irrelevant at this point, as the barrier has already been broken (and Bekele ran a 2:01:41 at Berlin). With capable competition and the barrier already broken, Kipchoge and others will be more aggressive in their attempts during actual races. And this will surely lead to the actual world record being lowered.

Beyond the event, the feat also demonstrates what many of us already knew --that it seems as a species we were made to run. Until recently, the world records at shorter distances were considered to be substantially more competitive than for longer races such as the marathon and half marathon. The question was whether we excelled at these shorter races, or that the rewards for winning these competitions were driving the standards. The recent drops in the world records for the marathon and half marathon, as well as the Breaking Two and INEOS 1:59 challenge results, are important. These feats mark the first time that marathon and half marathon times have been deemed to be physiologically more demanding or impressive than their shorter sprint and middle distance counterparts. Although it was not publicized, the payout to Kipchoge from Nike, INEOS, and other sponsors of the event, and the attention he received, were enough to focus him on this event rather than continue on the track or run the Berlin Marathon the week before.

To cap off such an extraordinary achievement, the women’s world record was broken a week later in Chicago, as Brigid Kosgei clocked a 2:14:04 and was the first woman to run under 2:15. Kosgei’s run took down a record held by Paula Radcliffe that had stood for sixteen years and that many also thought would stand for many more years to come. 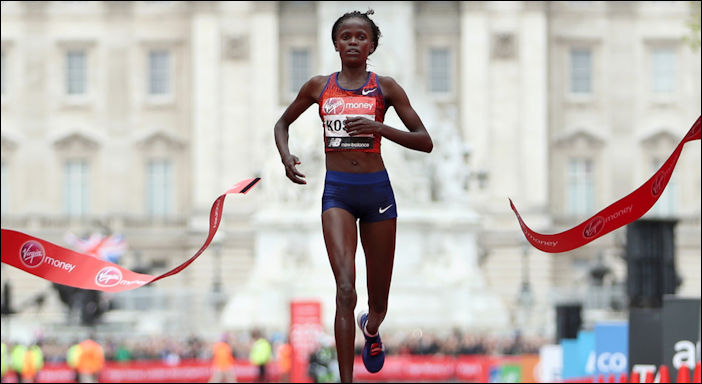 Everything We Know About Eliud Kipchoge’s Barrier-Breaking Shoes