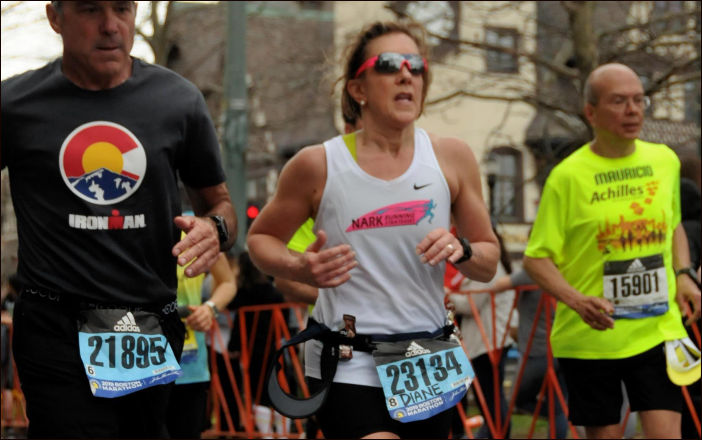 Perhaps it’s more difficult to fall short of your goal at Boston because everyone you know, who celebrated your qualifying time and supported you through your training, is not only rooting for you but tracking you – live – as you succeed or fail.

I’m honored and thankful to have run the Boston Marathon three times. It’s a great, historic race that thousands of runners have on their bucket lists, and it’s worth every day of training in whatever conditions that lead to a qualifying time.  All the hype is true: a million spectators lining the streets to cheer you on; thousands of friendly and helpful volunteers moving in synchrony from the expo to the finish line; a whole city bedecked in Boston Marathon everything – from apparel, window signs and banners, to beer!

My first Boston in 2014 followed the horrific bombing in 2013. The city embraced all of us as symbols of strength and victory over the prior year’s terror, and we all felt “Boston Strong.”  Last year was the worst and coldest weather in thirty years; temperatures in the 30’s, with 25 m.p.h. winds and driving rain.  I ended up with a PR and another opportunity to run Boston this year.

Now a week after the 123rd Running of the Boston Marathon, I am still reconciling the privilege and experience of this race with a disappointing finish.

Anyone who has run a few marathons (this was #17 for me) knows that all the stars have to line up to have a great race.  I had an awesome training season – hit all the metrics, aced all the long runs, and even had a three-minute PR in a half marathon leading up to Boston. I was ready! I was going to beat last year’s PR. And then, I would happily retire from full marathons, at least for a while.

In the days leading up to Boston, the forecast went from “great” to “oh no.” When we reached the Athletes’ Village, the early morning’s pouring rain and lightning had stopped, and the announcer cheerily kept reminding us how much sun we were going to have.  My kryptonite: strong midday sun, heat and a good dose of humidity – we got up to 70 degrees.

Like every other warm-weather marathon attempt I’ve made, Boston was difficult.  I was conservative but on pace through the first half, but around Mile 17 the wheels came off for good. Surprisingly, I was not the only one who was reduced to walking; there was lots of company on the struggle bus!  I kept reminding myself that eventually I would finish, and boy – was the beer going to taste great! The GU’s in my belt, however, were of no interest and I was only able to take the first two before swearing off any more.

The skies finally opened up about a mile before I finished, and I felt renewed and revived. I was running at a normal pace making my right onto Hereford and left onto Boylston.  As I crossed the finish line, the rain continued along with cold, gusty winds that surely would have made a difference a few miles earlier!

The post-race beer was as rewarding as anticipated, but my inability to prevail over the weather is a sort of lingering hangover, which I’m sure will work its way out of my head any day now. 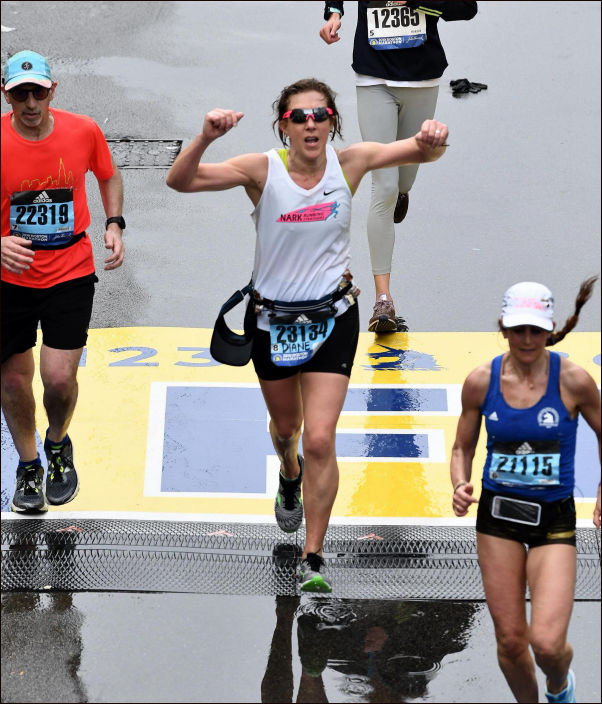