by Brad Lewis and Karen Bertasso 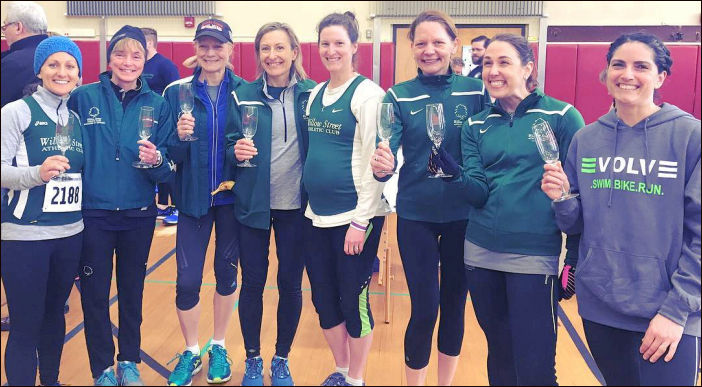 Willow Street Athletic Club is anxiously gearing up for 2019 and we are excited to have new team members and new goal races. Much of our focus is on team races, many of which are part of the USATF Grand Prix. In addition, we travel to compete at national level at races such as the Boston Marathon.

The 2019 racing schedule is an open discussion among the entire team. Eventually, as team races get narrowed down, the captains from both teams compile the suggestions and put together an internal schedule.

This spring is exciting as we look forward to kick off the season at the HMRRC’s Runnin’ of the Green, which allows our men’s and women’s teams to compete together. The USATF National Masters 8k Championship is next on 3/16/19 in Virginia Beach, where the masters men will compete as well as masters women’s team star Lori Kingsley tackling the marathon. In addition, the team will be competing at the inaugural Helderberg to Hudson Half Marathon on 4/13/19. Looking forward, the USATF Club XC National Championship in Pennsylvania as an exciting goal to cap off the season in December!

Our individual runners compete in additional races that are not explicitly part of our racing schedule, but are part of our individual members training plan. You’ll see some our team members at local races like the Delmar Dash (4/7) and the Bill Robinson Masters 10k (4/27) as well as races across the country that are on a national caliber.

We are excited for new members Anthony Guiliano and Joe Sullivan to bolster our Men’s Masters and open team.

In addition we are adding new women who will make the team even stronger. We welcome Sara Buckley, Allison Thayer, Elizabeth Izzo and Erin Murphy to Willow Street.

We are always looking for new members. If you are interested in participating on our team, reach out to one of our team members or captains to get more information. Click here for contact information.