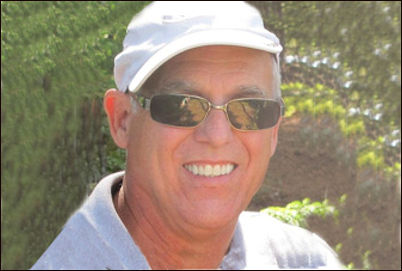 What is course certification?

Course certification is a method for producing a detailed and accurate measurement of the length of the “shortest possible route” that a runner can legally run on a road race course. The method builds in safeguards to ensure that the length of the course route is at least the distance that is advertised. Certification also takes into account record-keeping criteria for determining whether a course is excessively downhill or whether a competitor’s performance on the race course can be unduly aided by a tailwind based on the geographic separation between start and finish locations.

In the early 1980s, USA Track and Field (USATF), the national governing body for road running, -- called The Athletic Congress, or TAC, back then -- formally adopted a set of procedures to measure road race courses. Courses measured in adherence with these procedures are issued an official USATF Measurement Certificate together with a detailed map of the course that depicts its exact route and provides the technical information necessary to properly set up the course, including the precise locations of the start, finish and any turnaround point(s). Most maps also describe the location of intermediate splits on the route, either in miles or kilometers.

Here is an example of the Measurement Certificate and map for the Delmar Dash: 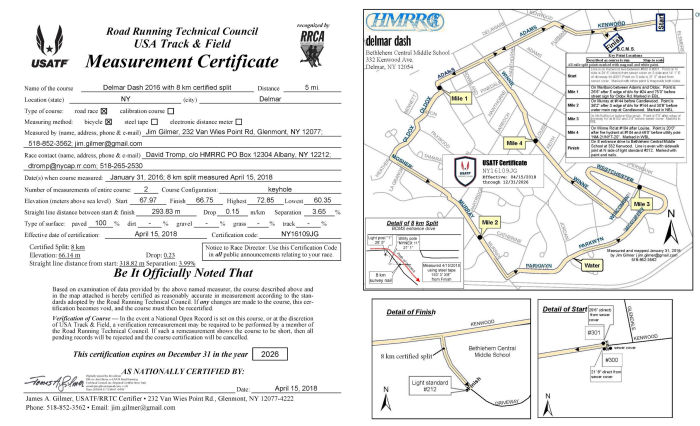 The overriding rationale for course certification is to preserve the integrity of record-level competitive performances in the sport of road running. To apply for a record in an American open or masters category of long-distance running on a road, USATF requires that the race be competed on a certified course. Moreover, in order to bid on a USATF championship at the national, regional or association level, the race must be competed on a certified course. Even more stringent, for USATF national championships the course must be “preverfied” prior to the event, which means it was measured by two IAAF-graded measurers, at least one of whom holds an “A” appointment.

In addition to record ratification, and particularly for marathon courses -- whether championship or not -- course certification is required for a runner’s performance to be considered a “Boston Qualifier.” Within an eighteen-month period prior to the Patriot’s Day event, runners who aspire to challenge themselves on this renowned and historic route from Hopkinton to Boylston St must have completed a “Boston Qualifying” marathon in a time at or below their age-graded standard. Currently, on the USATF Course Search database, there are 1,773 active certified courses of marathon distance (42.195 km), covering all 50 states, plus the District of Columbia and Puerto Rico.

Lastly, and probably the most common and useful reason, certification ensures the running community that courses of the same advertised distance are actually comparable. This has nothing to do with “official records”, which the vast majority of runners may pursue but likely will never attain. It has everything to do with “personal records”, however.  Certainly, courses will vary on many substantive criteria that can impact performance -- a steep hill at the start, an excessive number of turns, a downhill finish, etc. But runners who are honing their racing skills  toward achieving a personal best, whether throughout the running season or across a running career, want (and deserve) assurances that this weekend’s 5K will be the same distance as last month’s or last year’s 5K. Just as consistency is fundamental to attaining peak athletic performance, so to is comparability a bedrock principle of across athletic performance. And in this respect course certification serves to guarantee runners of a base level of consistency across the various the road races in which they choose to compete.

[Next month: What goes into certification? What is the method for measuring a course?]

Jim Gilmer has certified more than 225 courses since he began measuring in 1995. He is the USATF Regional Certifier for New York and an IAAF Grade A Measurer. In 2018, Jim was awarded the USATF/RRTC Ted Corbitt award for his contribution to course measurement and this year was the recipient of the President’s Award by the USATF Adirondack Association