You don't need a Race for an Ultra Adventure: Or 19 hours hard labor for a bowl of noodles 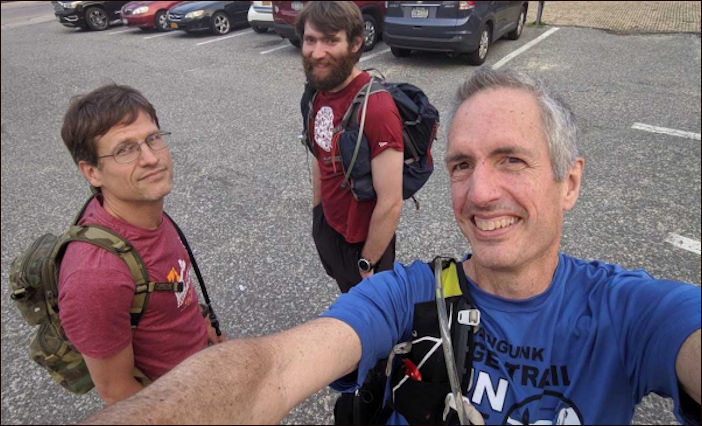 Two of my favorite races are independently run trail ultras. Both Wakely Dam Ultra and the Shawangunk Ridge Trail (SRT) races are self supported point to point trail races. The biggest thing the race directors provide for the runners is the after race food/beer and the transportation from the finish to the start in a school bus. There is of course a lot of hard and appreciated work that goes into running those races involving permits, logistics, keeping track of runners, and likely a hundred more things. However, on May 31, 2019, two crazy runners and I learned that with a little imagination, some great friends, public transportation, and an awesome trail system you can create your own event.

While running some trails early this spring on Bear Mountain to get away from all the snow around here, my friend T noticed a sign at the junction of the Appalachian Trail and the Long Path that said something along the lines of 50 miles to the George Washington Bridge (GWB). That sign sparked T’s imagination and he realized that a self supported point to point trail run from Bear Mountain in Peekskill to NYC would be possible without a race or even two cars. All the ingredients for an awesome adventure were right there: you could park at the train station, Uber to the trailhead, celebrate with food and drink at the finish with NYC’s unlimited incredible choices, and then take a train back to Peekskill where your car is waiting for you.

J skillfully created the course with Garmin connect and downloaded it to his watch in 4 sections. The course looked to be about 55 miles with about 9100 feet of elevation gain. We figured we would take it easy and finish in 15 or 16 hours. Optimism is the curse of runners everywhere and always gets me in trouble. Estimating how long it will take to complete a new trail run is very similar in difficulty to estimating how long it will take to write a software program. Just like software the longer the project the more inaccurate the estimations become. Maybe I should write a book The Mythical 9 Minute Easy Mile as a runner’s analog to the Mythical Man Month.

Since T had to be at work early Sunday morning, we decided to treat the race like the SRT 70 and start slightly before dark and run through the night. My oldest son was running his last race high school race ever as a senior for Shen, the 3K steeple Friday at around 4:30. The race was fun to watch and although he did not PR, he ran a respectable 10:27. After cheering him on at the race, J, T and I headed for Peekskill directly from Shen. After one last meal at a rest area on 87 we arrived at the train station a little before 8, and summoned an Uber to take us to Bear Mt. We watched the sun setting behind the mountains as we drove to the start. The weather was perfect - no rain forecast for the next 24 hours (which is no small miracle for this spring). We had nothing to blame but ourselves for failure to make it to NYC. 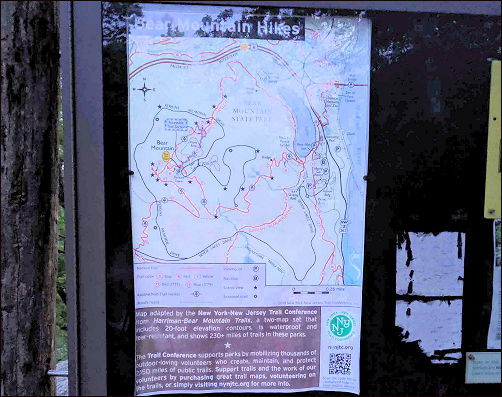 As we started running from the Bear Mountain Lodge we could hear the merriment of a wedding going on inside. A beginning for someone else as well. We started off super slow walking up the trail. We passed a few folks heading out of the trails. I worried a little bit that a park ranger would be upset at us for running after sunset, but nobody seemed to care much about us at all. After summiting Bear, we stopped to put on our headlamps as night was falling and we did not want to fall with it. The next section was on the Appalachian Trail. Sure enough we ran into AT thru hiker going by the trail name FireBall who had started in Georgia in March. She was remarkably bubbly and happy for someone that had been on the trail that long, and still thought we were absolutely crazy running to NYC in the middle of the night. 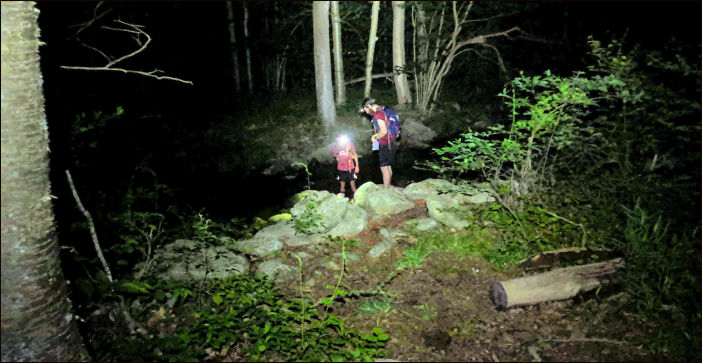 We proceeded up and down through the night mostly on the Bear Mountain-Suffern trail. The first 17 miles had the largest predicted elevation gain of 4200 ft. Every once and a while we would come out on an outcrop and see our final destination. A small island of light from NYC that can be seen from 50 miles away. The possibility of being that far away by the next day seemed remote at best, yet that was the task at hand. A strange thing happened at almost every technical rocky downhill section. Large moths seemed to come out of the woods and fly into our faces. Maybe we slowed down just enough that they could be drawn to our headlamps or maybe moths hangout on steep rocky trails in the middle of the night waiting for trail runners. 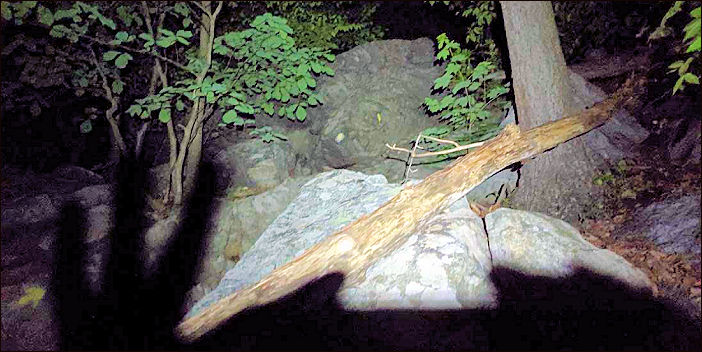 Another popular insect of the night was the millipede. There were thousands of them all over the trail, which prompted a lively discussion about 1,000 legs verses 100 legs for a centipede. J also touched one and promptly got millipede cooties for the rest of the night. There was also some odd discussion about the edibility of millipedes. After going up and over three or four mountains we joined up with the long path at about mile 17 of our adventure and the end of J’s first Garmin segment! The last climb down was basically a boulder fall where I figured I could get a really fast Strava segment if I threw my Garmin off the cliff and found it again at the bottom. Realizing I was likely not to ever find it, I settled for the very slow descent. 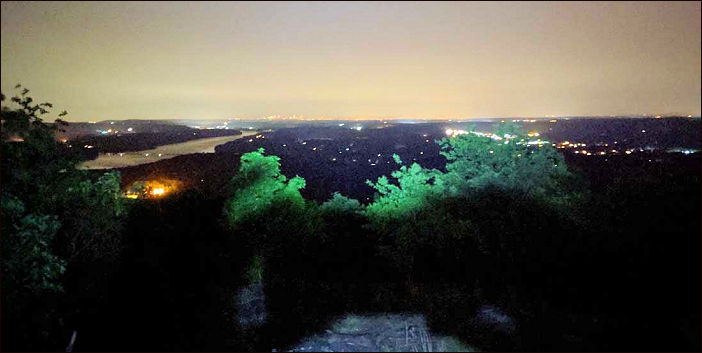 We were now following the aquamarine painted rectangular markings of the Long Path on trees, rocks, road signs and various other semi-permanent structures. These were not as easy to follow as the really awesome retro reflective blazes of the previous trail. Remarkably with J’s Garmin tracks and three brains and sets of eyes we stayed for the most part on course. At one point in the night the trail just after Cheesecote Mountain Town Park was less than used. We ended up off trail, but could tell the trail was just through the swamp to our left by using J’s Garmin. We proceeded to bushwhack, but the bushes had teeth! I slipped and fell into a patch of thorns. I howled bloody murder and J thought I surely had a compound fracture. I imagined inch long thorns broken off and embedded in my arm in multiple places. I did have some bleeding but instead of deep punctures, they seemed to all just cut along the surface. We moved on past what the map later revealed to be a dog shelter which instead sounded like an angry pack of dogs ready to attack us. We then proceeded to miss a turn and end up on an overpass with the trail visible below. We scrambled down the hill and avoided any injury.

Dawn seemed to break in a very binary fashion with a step function instead of a linear one. It seemed every couple of minutes it would suddenly get a lot brighter. I remember seeing the Hudson to the left along a powerline cut out in the woods and was excited for the morning light. The next memorable moment came around mile 29 in Hook Mountain State Park. The three of us sat on a log with T explaining how he was falling asleep while running. This was one of those points where it looked like we might not finish. We ate some food, drank a bit, and forced ourselves to move onward. The trail rewarded us with some really nice views of a mansion in Upper Nyack along the river. I became motivated by the certain possibility that there would be a store in Nyack where we could fill up on junk food. Right at mile 32 we found a glorious gas station where we stopped and purchased coke, iced tea, potato chips, candy bars, and water. We sat on the curb and feasted on our bounty. We must have been quite a sight, three guys in sandals covered in mud eating food you would find at a 5th grade birthday party. 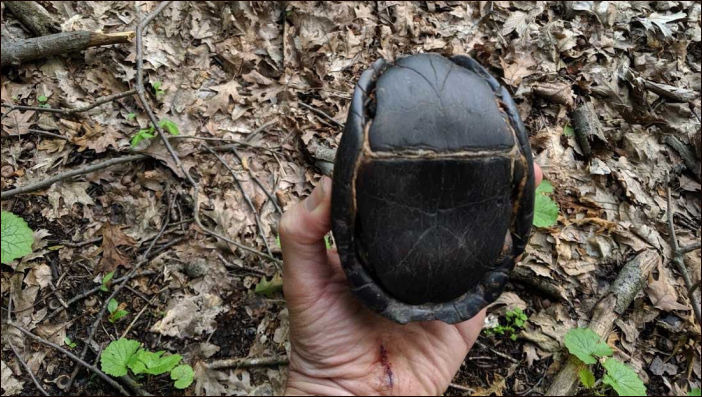 The party ended and we hobbled down the road trying to run, but looking more like arthritic 90 year olds shuffling up the hill. We did find a cool box turtle on the trail there. The next major event of the day occurred at Blauvelt State Park. We came across a concrete wall covered in bright graffiti. On closer inspection it was not just a wall, but tunnels into the ground. Turns out it was an old military long range gun base that was shut down because the bullets were flying too close to nearby houses. 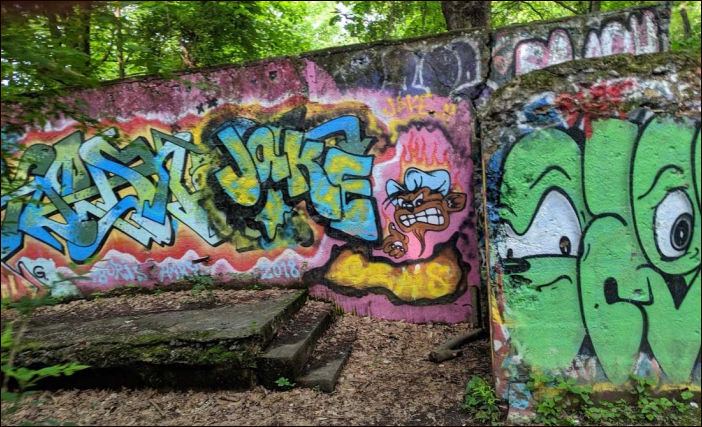 The trail continued to amaze me with the seemingly endless stream of parks. We did enter into a cemetery with some awesome downhill sections that I enjoyed. After the cemetery we went into the town of Piermont and briefly joined what appeared to be a 5K road race with a few moms pushing strollers with bibs on. They were faster than us. 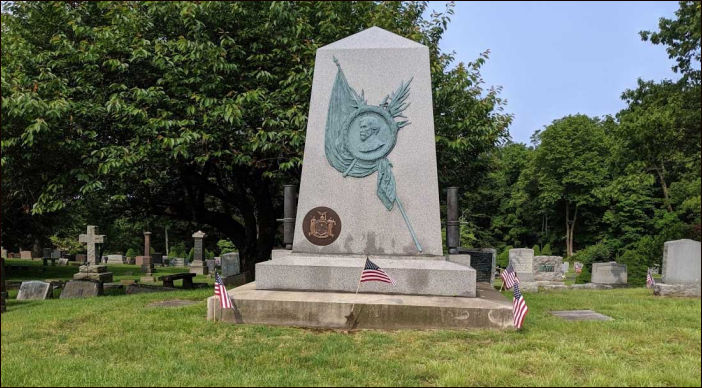 The trail continued on and on. As we were approaching the city, the number of people on the trail increased. We stopped for some reason I can’t remember and the rock we went to sit on had poison ivy near it so J moved to lie down on a rock in the middle of the trail. A hiker asked if he was all right, and he assured her that he was fine.  With about 13 miles left we came to Lookout Inn. J wanted to move on, but I felt the need for one last coke before going. We all stopped at a picnic table and drank our cokes. Shortly after getting started again we ran into some trail runners we had met at the SRT one year that were doing a similar run to ours but in the opposite direction. The couple had started at the GWB and was running 25 miles to a brew pub and would take the train back home to the city. They asked how we were doing and we admitted horrible, but awesome at the same time. They understood! 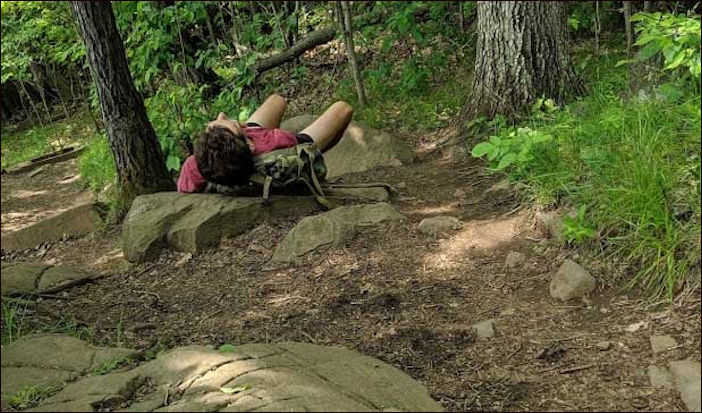 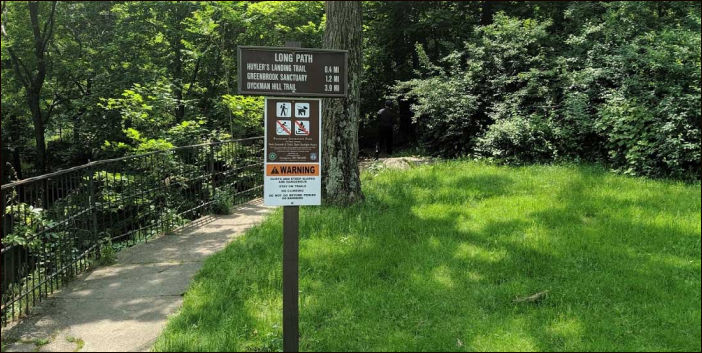 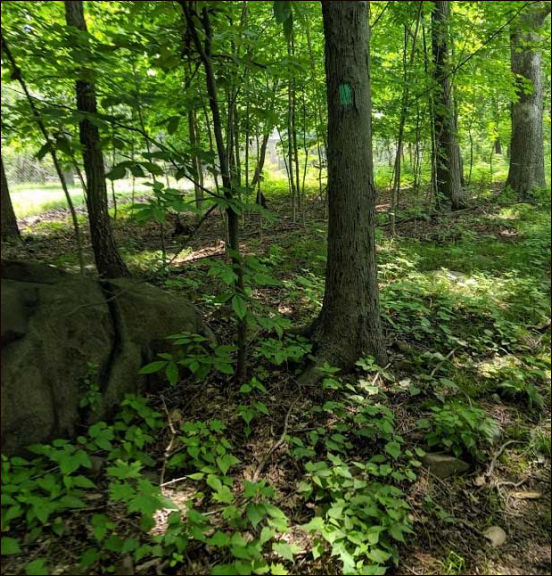 Eventually the trail followed Route 9W along the Hudson very closely with a view of the Hudson to the left and speeding cars to the right. Signs with mile distances also started showing up at this point. We were only 3 long miles from the GWB. The last aquamarine blase is on a concrete wall along the road to the GWB. I would have taken a picture of it, but I assumed the trail would end with some sort of official sign. However, it ends or begins with just a small unremarkable rectangular splotch of aquamarine paint. 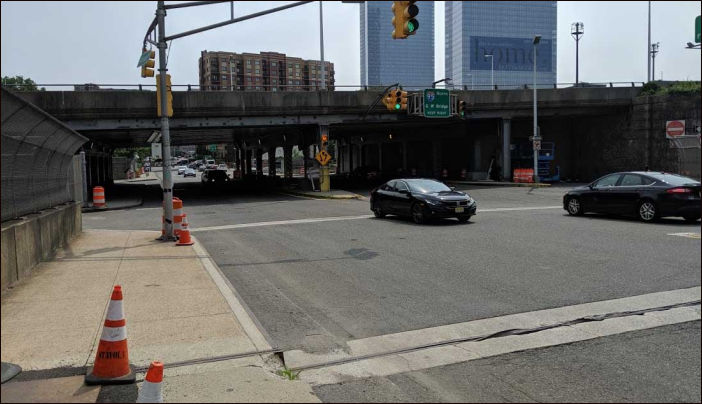 We all crossed the GWB together! We had made it in a little over 19 hours from Bear Mountain to the GWB. We then Ubered to Ivan Ramen and had a great bowl of noodles and a beer. We decided .3 miles was too far to walk to the subway, so we Ubered again to the train station. In 30 minutes we were on our way back to Peekskill and J’s car. Exhausted and exhilarated, we finished our excellent adventure! 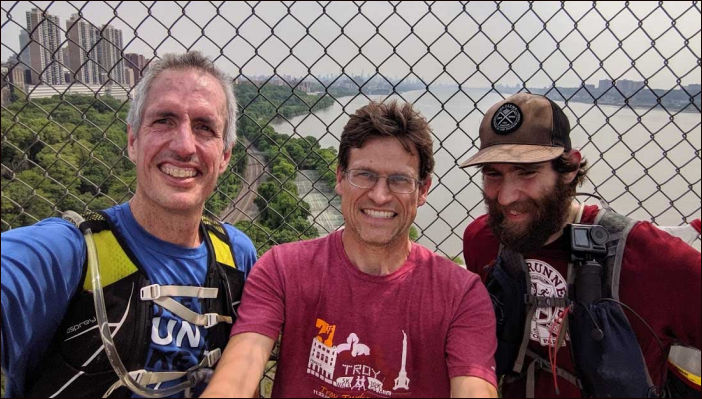 Footnote: A fellow trail runner from NJ explained to me that we were not the first ones to run a similar route. There is a fatass trail run called the Lower Hudson 100K . Next time we will have to join that group! 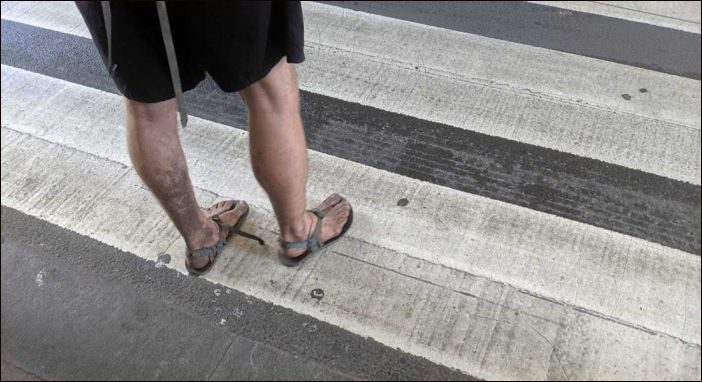 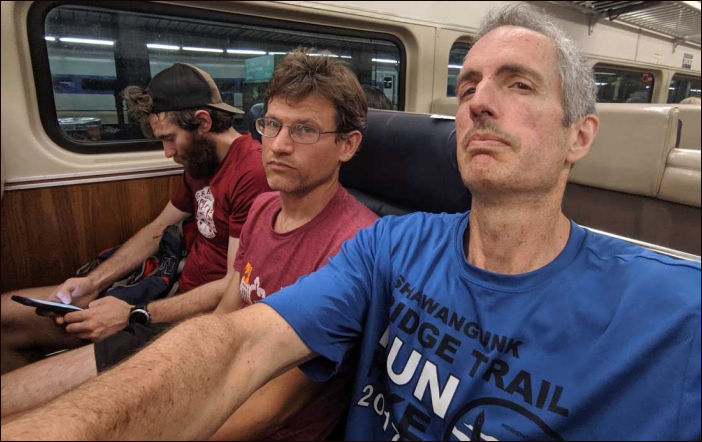 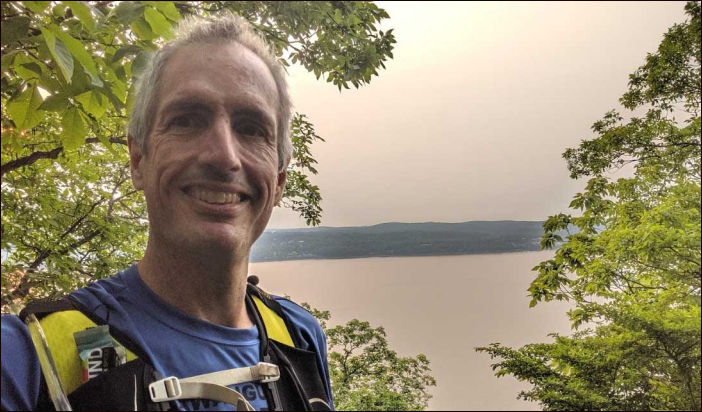 Check out our activity on Strava:  https://strava.app.link/ZNUgeUSdqX