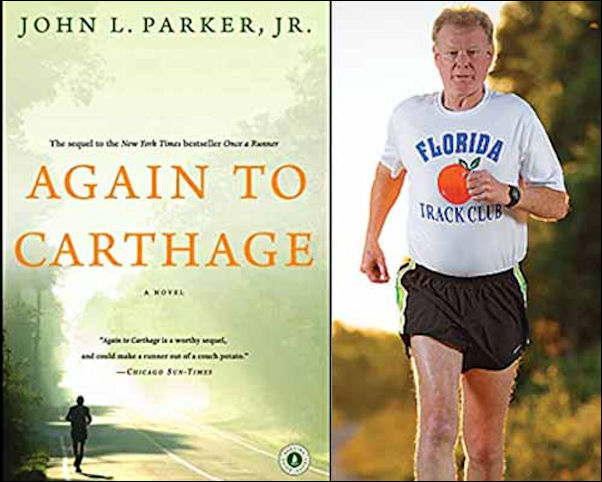 It’s December and it is less than three months until the 2020 US Olympic Marathon Trials. At this race 200 men and 391 women have qualified according to the USATF site to compete at the trials in Atlanta, Georgia to decide the three individuals who will represent the United States in the marathon at the 2020 Summer Olympics in Tokyo (August 2 men and August 9 women). Anyone who is familiar with running knows that simply qualifying for the trials is a tremendous accomplishment in its own right. For most people, qualifying stands out as the pinnacle of an exceptional athletic career. Within this race there is, however, a smaller group of people who are serious contenders for the three podium spots. And nothing short of earning a ticket to the Olympics is considered successful. So what kind of person and commitment does it take? Again to Carthage by John L. Parker gives a glimpse of a fictional runner, Quenton Cassidy, who is setting out to do just that – make it to the Olympic Games.

In Again to Carthage we pick up on the life of Cassidy several years after the end of Once a Runner. After setting a lifetime best of 3:52 in the mile and earning a silver medal in the 1500 meters at the 1972 Munich Games, Cassidy went back to school to earn his degree. From there, Cassidy attended law school and began working, establishing himself as an attorney in Florida. (Note: The Again to Carthage timeline follows events as if Cassidy won silver in the 1972 Munich Games, not the 1976 Montreal Games depicted in Once a Runner. There are other historical differences between the two books that some readers will notice.) As with many 20 somethings who find success in their careers, Cassidy begins to enjoy the pleasures of his success. This includes outings with friends as well as fishing and boating trips in South Florida and the Bahamas. Cassidy’s complacency with life takes a divergence when he loses a close friend who was still in Vietnam, and two close relatives.

The opening chapters take a look at Cassidy’s current life. Early in the book, he reflects on the finals at the Olympics, replaying the final 100 meters over in his head. Wondering how things would be if all the “What ifs” had gone differently. Cassidy reflects that “Bruce (his old coach) said it would be bad before it got better. That was just part of it. The big buildup and then the really big letdown. Worse than you could ever imagine.” To that end, Cassidy was content and done with the “Trial of Miles.” But like anyone who has traveled down the Trials of Miles and Miles of Trials there is something left nagging. And for Cassidy it is the silver medal sitting in a safe deposit box some 27 miles (a little more than a marathon) away from his current residence.

We learn about exactly how Cassidy gets into law school and avoids being drafted into Vietnam (again some historical difference in the fictional timeline of the book and factual timeline of history need to be forgiven). Eventually, it’s no surprise when Cassidy retools and comes up with a new game plan. Cassidy first consults with his old coach and then gets an analysis from a renowned exercise physiologist. This evaluation gives Cassidy an understanding of what it will take for him specifically to make an Olympic team in the marathon based on his physiology and background racing the mile. Cassidy decides he will take his speed and develop his endurance. The goal will be to not only make the Olympic team but join a select few number of individuals who ran the mile in under 4 minutes and the marathon in under 2 hours 10 minutes. Although the odds do not seem to be in Cassidy’s favor, he brings a newfound mental toughness and a maturity that extends beyond the youth he left in Munich.

The remaining chapters of the book cover Cassidy’s training and development leading up to the trials. There is no shortage of drama as we learn of a doping allegation, that the United States will boycott the games, and that Cassidy will try to rekindle things with his love interest. So how do things turn out for Cassidy – does he still compete in the trials? Does he run under 2:10 in the marathon? Does he place third? Does he GET THE GIRL? And finally – does he start the long hinted at book that covers what it was like to be “Once a Runner”? In order to find out the answer to those questions and to learn the trials and tribulations that Cassidy faces you will need to pick up a copy. And hopefully finish it in time for the 2020 Olympic Trials! Thomas O’Grady, Ph.D., M.P.H. (thomas.james.ogrady@gmail.com) – is an avid runner, hiker, and lover of the outdoors.