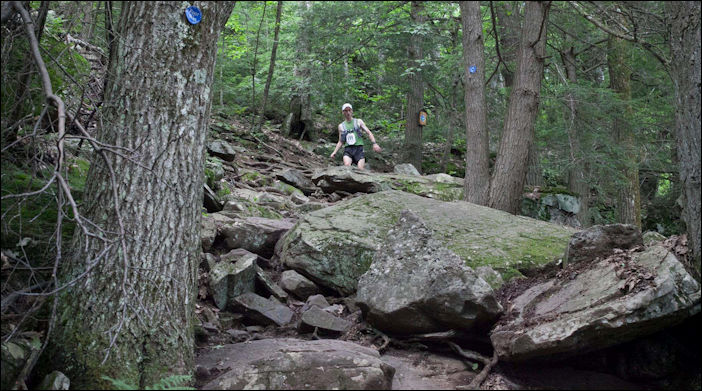 Luckily for me I have covered both the Escarpment Trail and Devil’s Path on my own in single outings so I knew what to expect when agreeing to pace Manitou’s Revenge for Bill. The paths are both serious undertakings on their own and the thought of combining them into one race seems as masochistic as the race website makes it out to be. Individuals completing this race are voluntarily putting themselves in a world of hurt. When we went over the pre-race plans I jokingly pointed out to Bill that the funniest suggestion from the race director was to remember to bring your antipsychotics with you.

After dropping Bill off at the start I was able to get another four hours of sleep before dropping our gear and the car off at the finish area. From here I joined a small group of runners who had also agreed to be pacers. As we road to the Platte Clove aid station the reason why I was even doing this never really crossed my mind. But for those wondering - I have asked a lot from family and friends over the years in pursuit of my own athletic endeavors. It’s been rewarding to go to events like this and be a part of the accomplishments of others. I would also get to spend a day on some of the most rugged trails in the Catskills while completing my (emphasis on long) long run for the weekend.

The other pacers and I got to the staging area with little fanfare around 10:00 am. Based on my calculations it would be another two and a half hours before Bill arrived. In this time I could set up our bags and eat some extra food. The fact that I would be running almost a marathon had crossed my mind so nutrition was important. I’ve been asked several times why I haven’t run this race and if I was interested. I know - for me simply saying “Well it’s 54 miles through some of the toughest trails on the East Coast and forces you to climb over 15,000 feet” isn’t enough. But that’s the excuse I’ve used so far. With that said around 10:30 am the top runners started filtering in. And at this time, Ben Nephew, the eventual winner and multiple winner, had a slight lead. Instinctually I went into race mode for a bit and began to consider - why wasn’t I racing, where would I be if I were, and I wanted to be racing something at this point! That feeling soon passed as more runners trickled in.

As predicted, slightly before 7 hours and 30 minutes Bill came barreling down the trail from the extended downhill portion he had been covering. I grabbed both our bags and met him as he came into the aid station. After some quick food and drinks we were on our way. I wanted to test his systems as we set out. Bill seemed to respond well here but something seemed off. I was not sure what to think. 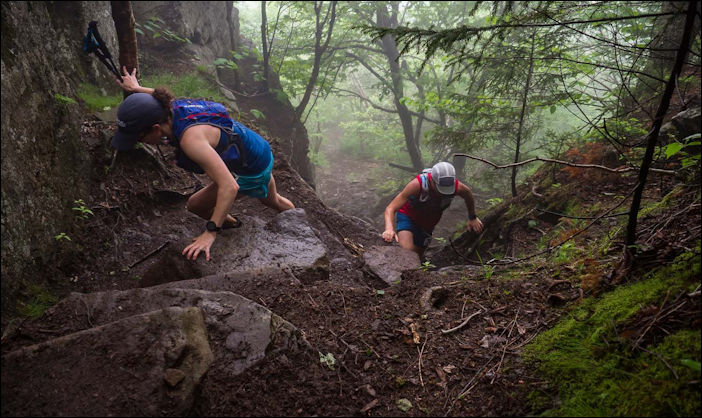 Our stretch of easy trail soon ended and we were heading up Indian Head. This is the first of the four peaks one crests on the Devil’s Path portion of the trip. It was here that I could tell Bill was a bit sluggish. I decided to question him and he admitted to being tired. I jokingly pointed out “Well you’ve run 31+ miles already you should be tired!” The lack of humor reflected back at me and told me this was going to be a tough stretch. I reminded Bill - “I’ve seen you worse than this. You don’t look like you are going to die or have a stroke. You can come back from this.” The half hearted “Yes” told me I had something to work with. 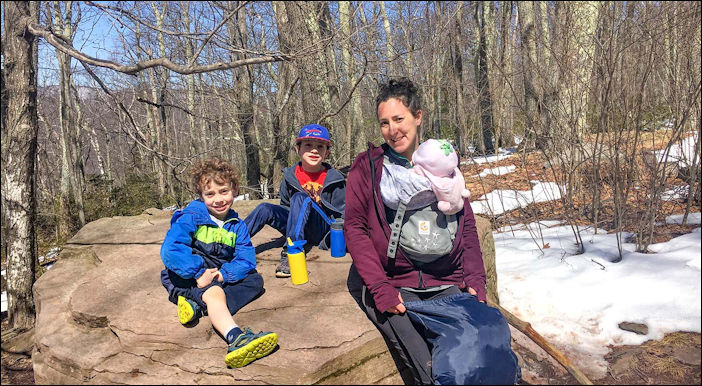 Up Indian Head we went. During this time we tried to get some gels and liquids. I knew nutrition would be key to this second half.  With some further questioning and troubleshooting, I realized we probably had a salt issue. By this time we had descended Indian Head and were heading up Twin. Bill still seemed to be lagging and we had to get down off Twin and up and over Sugarloaf before we would reach an aid station. These miles had me second-guessing our plan. We were in a bit of a funk and a few people had caught up to us. When we were about a mile from the aid station I noted the fact that we were “only a mile from the aid station.” When this went over like a lead balloon, I began to get a little more concerned. To the aid station we went. And what a nice surprise as we see my family there to greet us! They told Bill he looked good and offered encouragement. At the aid station we were able to replace the salt and fluids Bill needed with broth and flat Coke. 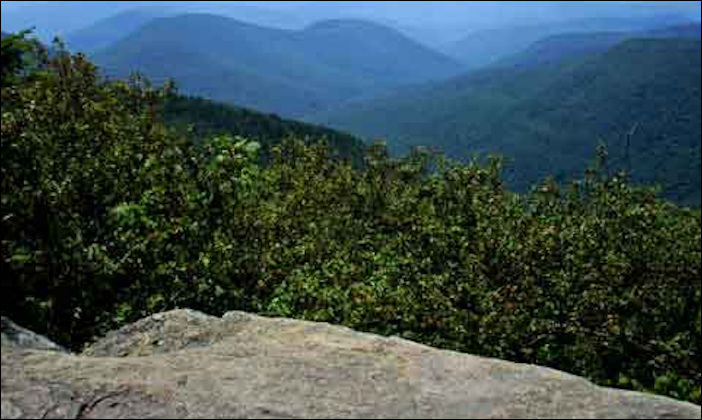 From the aid station we attacked Plateau and once reaching the summit of Plateau the nutrition was kicking in. That and the thrill of an extended runnable section above 3,500 feet brought life back into the race for Bill. During the section from the top of the Plateau to the aid station at Silver Hollow at 43.5 miles we started making some serious headway on our goal of “racing the sunset.” For a brief stretch we ran in tandem with one of the top women (who was in pursuit of her husband) and an unnamed shirtless man. As we came up on these two individuals and began to run with them the unnamed shirtless man said “Oh it's shoeless guy - Can shoeless guy keep up?” If the soup and flat coke weren’t enough of a kick this comment sparked another gear in Bill. The competitive side kicked in and Bill summoned enough energy to tell me we were going to push ahead of the two individuals we had caught and gap them. As we picked up the pace and pushed onward there were several comments from Bill about what shoeless guy was capable of and where shirtless guy was. I assured Bill that shoeless guy was on pace to beat sunset.

Between Silver Hollow Notch aid station and Willow Aid Station we ran with Scott Livingston. Scott was the individual running ahead of his wife. My comment that Scott’s wife was fast on his heels sparked a second wind from him. For a stretch during this period the three of us ran in tandem of three. It was not until this stretch between 43 and 48 miles that I realized how we were actually doing. I had been quite concerned about the possibility that Bill was going to fade. But it was here that Bill started saying things like “This is the fastest I’ve ever reached this point.” When I verified this was actually true I realized that we had a shot at beating sunset. To emphasize the goal we had I pointed at the lowering sun and said multiple times for emphasis - “You see that… that is your goal! You are trying to beat the sun!”

When you are in the woods it can be disorienting and your GPS can be inaccurate. I had been using the actual time and distance covered to predict our finish. I estimated that our GPS distance covered would be approximately 52 miles (or two miles short of the actual course distance of 54 miles). This was important to know because an extra two miles of running is crucial when you have a goal to accomplish. When we reached the Willow Aid Station 5 miles from the finish things seemed really good. Not only did Bill tell me this was the fastest he had ever reached the Willow Aid station… this was the furthest he had been in daylight.

Six miles - How do you ask someone to push for six more miles when they have already run 48 miles? There isn’t a lot to say. I know you are tired. I know you are hurting. I know you want to be done. But I need you to focus, dig deep, and push into your reserves for six more miles. That’s almost as long as a 10k! And that’s exactly what happened. The final two to three miles to the summit of Tremper Mountain were like the Little Engine that could - “I think I can, I know I can, I will… push push, dig deep, deeper, keep digging… I know you have more reserves than that.” And then at the top with all of the potential energy stored up, down we went! The downhill and faster miles were combined with comments like “I’ve never seen daylight this late in the race before!” My response, “I know but look… the sun is getting lower so you better keep moving. We are threading the needle here.”

Fifty-three miles - At the base of Tremper Mountain onto Route 40. “Ok, Bill let’s go.” For the fourth or fifth time I reiterate that Bill is threading the needle time wise. We have to move and you need to finish this last 1.3 miles! And with that I get him to run (with 30 second pick ups thrown in) to the finish. As we make the last turn to the finish I tell him, “ Dude, you are actually going to do it!” I had thought fifteen hours was an outside possibility and at 8:32 pm Bill crossed the line in 15:16:57. The race against daylight had been won and a new personal best had been set by over an hour.

For those keeping track. Our flawless execution of the game plan could not go completely flawless. After carrying a Tesla key for 23 miles over some of the most rugged trails in the Catskills it managed to drop out of my pocket onto the grass after I changed into my post race gear near the finish. By this time the race against daylight was over and the quest to find a black key in the dark had begun. Luckily I heard an excited little boy tell his mom he had found a Tesla key in the grass and turned it into officials at the finish. With that we retrieved the key and were able to end the adventure on a high note.

Of course it didn’t happen if it’s not on strava (not only did I beat the sun, but I beat my watch battery which Tom certainly would not have let me take time out to charge had it died):

Final thoughts: If you are up to the task, this is an awesome race. The food on the course and the volunteers at the aid stations are the best I have seen at any race. The course is well marked and ridiculously hard in a great way.