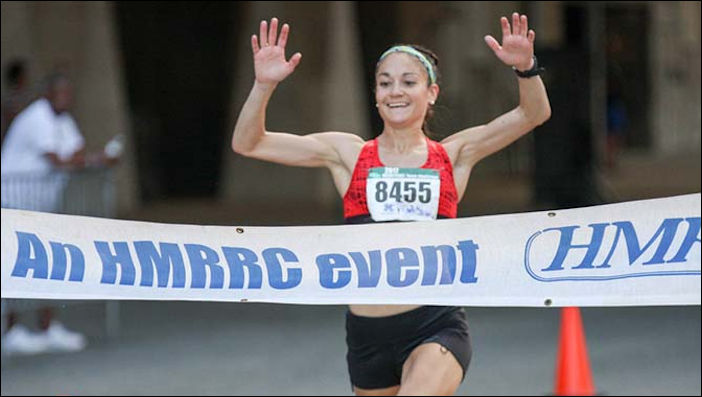 The Olympic Marathon Trials is the race where it all goes down. It is here that the three men and three women who will run the marathon for the United States at the Olympic Games in Tokyo are chosen. The country’s most exclusive marathon will be held next year on Leap Day in Atlanta, GA.

The qualifying marks must be made on a USA Track & Field (USATF) certified course, in an event sanctioned by USATF or a member federation of the International Association of Athletics Federations (IAAF). According to USATF lists, 140 men and 262 women had already qualified as of the end of 2018.

On February 29, 2020, those super-humans who are talented enough to have nailed an impossibly fast qualifying time will toe the line and take their shot at making the Olympic team. Among them is an elite athlete and orthopedic PA Karen Bertasso. Just what does it take to punch your ticket to the big race in Georgia? About six years of competitive distance running, and a well-executed marathon for one!

Congratulations on qualifying for the Olympic Marathon Trials Karen! So you qualified in October of 2018! Was this your first time trying to qualify?

Thank you! Actually, it wasn’t my first attempt! I tried to qualify for the Marathon Trials at the California International Marathon in December 2015. But the standard for qualifying had just been changed, and I was injured at the time on top of that.

My knee shut down in the middle of the marathon, and I missed qualifying by 45 seconds! So I decided to do back to back marathons instead of giving up on qualifying, but missed it again at the Houston Marathon in January 2016. I ran 2:46 at both.

I finally qualified at the Hartford Marathon on October 13, 2018. It was my 20th marathon!

You ran an impressive time of 2:43:46 and a pace of 6:16 per mile on a rain-soaked day, guaranteeing you inclusion in the Olympic Trials. That’s so exciting! How is training going so far?

I have successfully stayed around 80 miles per week for marathon training over the past 4 years. But now the focus is shorter training and speed work. My marathon block will begin in the fall. I’ve put my training in the hands of my coach, three-time Olympian Jen Rhines, and she coached me to a qualifying time!

At what point did you know that it was doable to qualify for the Olympic Marathon Trials?

Probably not until 2013. I didn’t start running competitively until then. Before that, I played soccer and ran track at Union College while pursuing a degree in neuroscience.

It wasn’t until 2013 when I was living in Colorado that I had a breakthrough in my running and hired my first coach ever. Having a coach to tell me what workouts to do and what to focus on helped so much!

My marathon time dropped to a 2:50 flat and I was still feeling pretty good, so my coach and I discussed the Olympic Trials and decided, “Hey, let’s go for it!”

You do strength training 3 to 4 times a week? Should all runners do this, even if we aren’t training for a marathon?

Absolutely! I follow a strength training program that takes 15 minutes a day, which is good because I can’t handle spending an hour at the gym and running all my miles on top of that.

As runners, we can and should find 15 minutes a few times a week to do strength training. It’s key to keeping everything strong and preventing injuries. Strength training has personally helped me in dealing with runners knee.

In my strength training, I focus on exercises for my core and glutes. It’s important to get the glutes firing before things become a problem. Exercises like fire hydrants and donkey kicks will get your glutes firing. Hip hikes and clam shells are great too!

What are your nutrition secrets?

And you have to practice what you will eat and drink during the actual race, then stick to what you practice. Practice with the bottles you’ll have waiting at the water stops if that’s an option. I practice eating gels, and then I eat about 5 gels during my marathon and alternate with water.

Also, take the time to find out what will be available on the course. I learned this the hard way during my race when someone picked up my bottle by accident at Mile 20. He did run back to return the bottle to me, but now I know that I can’t depend on my own fuel all the time.

What about run gum? You mentioned using that in races.

Run gum was created by Nick Symmonds, a runner who has made two Olympic teams, and his coach Sam Lapray. Nick wanted the performance benefits of caffeine, but he hated the way it had to be consumed. In 2014, Nick and Sam worked with expert formulators, nutritionists, and athletes to develop a caffeine-infused chewing gum.

I’ve used it before in the winter, and it’s great for a boost when I finish a long day of work, but I still need to do my run. I don’t use it when it’s hot because it boosts your heart rate, which will happen naturally when you run in the heat.

You have Raynaud’s disease. Does that make things challenging?

Raynaud's disease is a rare disorder of the blood vessels. It’s a vascular issue and your hands and toes get really cold. The disease causes the blood vessels to narrow when you are cold or stressed, both of which can happen in a race! As a result, blood can't get to the surface.

My hands get numb and can turn white and blue even when I have gloves on. Unfortunately, if my hands are wet and become numb, I can’t get to my gels. But I may try other gloves the next time I run a race that is cold and wet.

In your Hartford Marathon post on your blog, you said you had to remind yourself to “Run your own race.” How important is that?

It’s huge. I do so much of my training alone, so I know I don’t need to rely on someone else to pace me during a race. But I can still get wrapped up in what other people around me are doing mid-race.

It’s good to remember that even if someone goes out fast, you don’t have to go out with them! Start conservatively. Run your own race. And stick to your plan, no matter what anyone else is doing! 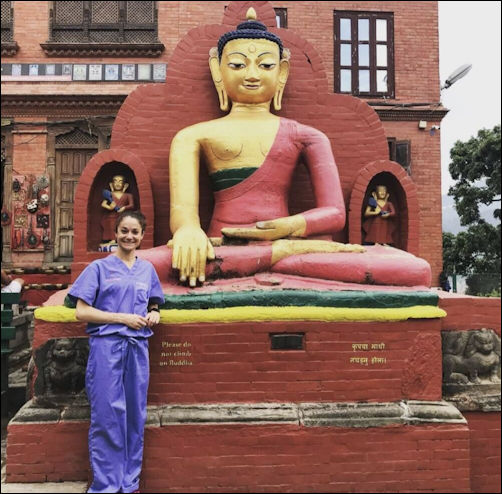 You are a Physician Assistant in Orthopedic Surgery and you volunteered for medical services back in June. Did that affect your training?

For 2 weeks in June, I volunteered at a clinic for the poor in the Kathmandu region of Nepal. The poverty level there is upsetting. They work from dawn to dusk just to make ends meet. Volunteering there is something that has been on my bucket list since a friend of mine who was in the Peace Corp in Nepal told me about the country.

I couldn’t run at all during that time in Nepal, but I had planned that as a little off-season from running anyway since I knew that the roads there is a complete mess. There are some trail groups out there, but I couldn’t get out of the main city to meet up with them.

The infrastructure was awful. It was way too scary to try to get a real workout in. You could get hit by a car, or get lost! But I did happen to be there for my birthday and Global Running Day and was able to get some miles in that day since there was a group run. We had a run escort and everything!

How that trip impact you?

The Nepal trip helped me realize that there are people in other places who don’t know or understand what we do. It taught me to communicate clearly.

It also made me a firm believer in planned breaks from running. Otherwise, you will get an unplanned break (from an injury)! Even in 2016, after I did the back to back marathons, I had a cruise planned and just spent the week relaxing. And being on a ship eliminated the temptation to workout!

How do you balance a demanding career with training for the Olympic Marathon Trials?

It has definitely been difficult at times. I did change jobs though, so it is not as challenging as it used to be. Before, I had to take overnight calls, and work holidays and weekends.

Now I get those off and I have a set schedule of Monday through Friday. I plan my training around that. I still operate in the OR though, so I need to be good about packing snacks and water on me, and remembering to drink. That has definitely been trial and error!

For runners, it is so critical to have a training schedule to achieve your goals! I am captain of my running team here in Albany, NY, but I have my own coach that gives me a running schedule 2 to 3 weeks in advance. Then I write everything out on a calendar.

Anyone can work full-time and train for a marathon. Just stay organized and ask others for help!!! Find a coach, a baby sitter, a dog walker. Ask your family and friends to help with errands. Even your running community can be a huge help! I ask my running friends to keep me accountable for getting out the door when I am tired and don’t want to work out, like the runners from Willow Street Athletic Club and the Albany Running Exchange. When you get other people involved in your journey, it becomes their journey too. So when you taste that victory on race day, it’s their victory too!

By the time Karen runs in the Olympic Trials on February 29, 2020, it will be seven years since she decided to “go for it” and it’s been a journey of patience since day one.

"Patience is the key to success. Good things come to those who wait,” Karen says in her running blog. “Success doesn't come overnight for most people. It requires a lot of learning, hard work, and experience to reach a certain life goal.” 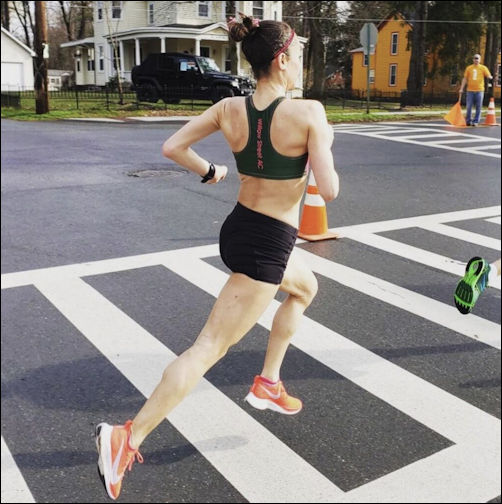 Here at RunnerClick, we’re hoping that patience takes Karen all the way to the Olympics next summer! To follow her journey to the Marathon Trials, find Karen on Instagram @kickassbertass.