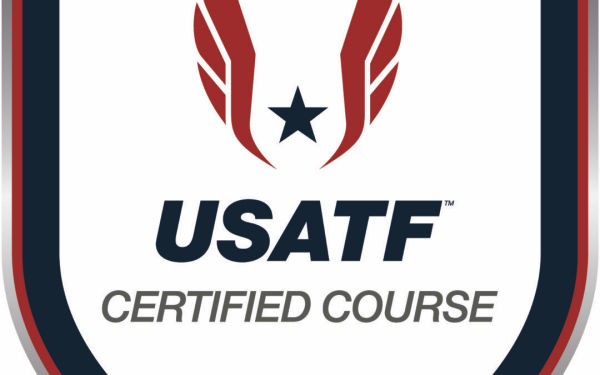 (The second in a series of three articles on measuring courses for USATF certification.)

What is required for a road race course to be certified?

Before tackling what’s actually involved in measuring a road race course, it is critically important to have a working understanding of the official USATF regulations governing course certification. Rule 240 - COURSE CERTIFICATION of the 2019 USATF Rules of Competition lays out four key requirements that must be adhered to in measuring road courses for certification:

1.    Advance Measurement. “The course used for certification must be certified prior to the running of the event” [Rule 240.1; emphasis added]. Although seemingly self-evident, this obviates the uncertainties (and accompanying headaches) of attempting to ratify an athlete’s record performance through an “after the fact” measurement. Simply put, this rule requires the course used for competition must be set out, measured, and certified in advance. This does not require, however, marking the “shortest possible route” (see #3 below) on the physical surface of the course for the runners to follow. But neither does it preclude this strategy.1

2.    Certifiability of the Course. A course or “path” (the term used in the Rules) is defined as “the streets, roads, paths, marked paths on grass, gravel or dirt, and/or paths using established permanent landmarks or benchmarks which is intended as the runner’s path for any type of race” [Rule 240.2(a)]. Note that while this clause permits “marked paths on grass, gravel or dirt,” no similar distinction is made of “paved” surfaces such as asphalt, concrete or, for that matter, cobblestone, brick, boardwalk, etc. At first glance this definition appears sufficiently broad as to allow traditional cross-country or trail run courses to qualify as certifiable. In practice, however, the term “marked path” has been interpreted to mean that there is a clear distinction between what is considered part of the competition surface of the course and what is not. Curbs, pavement edges, barrier fencing and other similar structures or features of the surface terrain illustrate the types of demarcation necessary for the course to be considered certifiable.

3.    The Measured Route. The “shortest possible route” (SPR) requires that “the measurement shall follow the runner’s shortest possible legal route” [Rule 240.2(b); emphasis added]. The SPR embodies what is conceivably the most salient principle of certification and is the holy grail of course measurement. Most runners are probably aware of the SPR in principle, but few practice a strict adherence to running the measured line of the course in order to benefit their performance. More will be said about the SPR later in this article.

4.    Short Course Prevention. “In order to ensure that a course is not short, the measurement must include an addition of 1/1000th of the stated race distance” [Rule 240.3(a); emphasis added]. The rationale for adding a marginal percentage to the total stated distance of a course recognizes the difficulties and variability inherent in conducting a physical measurement of the route. As the Course Measurements Procedures Manual puts it:

Translating this into real-world terms, the perfectly measured SPR of a 5K, including the Short Course Prevention Factor (SCPF), totals 5,005 meters — accounting for an extra 16 feet, 4⅞ inches, or roughly 4 to 6 strides. At the other end of the spectrum, a marathon is longer than its officially stated distance by 42.195 meters, or 138 feet, 5¼ inches — which for a runner can translate into 28 to 46 strides. Importantly, when a certified course is verified2 for purposes of determining a record performance, the SCPF is excluded from the calibration constant. A discussion of computing calibration constants and course verification procedures will be covered in the next article in this series.

What is the shortest possible route (SPR) and why is it important?

Conducting a SPR measurement of a road course, in practical terms, entails measuring approximately 12” (30 cm) from the curb or the edge of the pavement on straightaways, and in a direct line between the tangent points of turns or curves on roadway segments.

The illustrations in Figures 1a-1c, borrowed from the USATF Course Measurement Procedures Manual, depict how the SPR is determined in three different kinds of commonly encountered circumstances.

Fig. 1a depicts the simplest pattern of SPR measurement in the segment of a course with two 90° turns in the same direction, either right or left. Formed by two intersecting route lines, the measurement proceeds along the edge of the roadway maintaining a margin of approximately 1 foot from the “legally runnable” edge of the path (roadway). In practice, the sharp intersection of route lines is seldom measured as a right angle, but treated as a curve -- and is often presented as such in the physical environment. When temporary hindrances or obstacles, like parked vehicles or construction barriers, are encountered along the SPR, an “offset maneuver” (discussed in the next article of this series) is executed in order to preserve accuracy in measuring the line of the shortest legal route.

Fig. 1b. SPR of two turns in opposing directions, right then left (90°)

Sequential turns in opposite directions, as shown in Fig. 1b, are also not uncommon features of road courses. But this kind of configuration poses a different problem for measurement in that the line of SPR crosses the width of the course (roadway) diagonally from the tangent point of the first turn to that of the opposing one. In practical terms, the measurer loses the aid of having a visual reference in following the SPR as defined by the edge of the course, thus introducing an additional source of error or bias into the physical measurement of the route. In this situation the experience and skill of the measurer becomes a critical factor in maintaining the the quality of the measurement, both in terms of visual siting the actual SPR and in staying true to it throughout the diagonal transverse of the path (roadway). 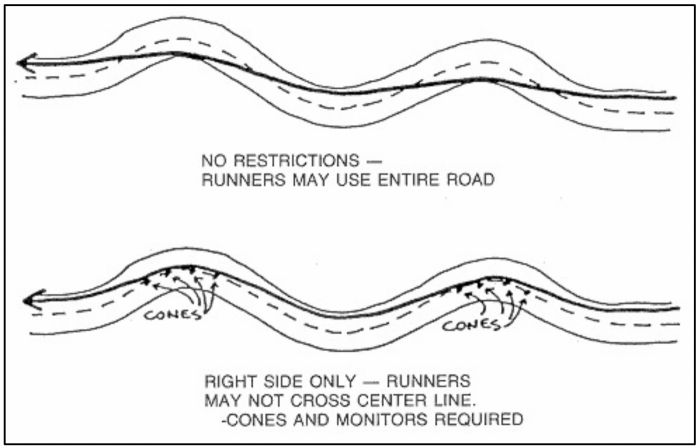 Fig. 1c. SPR of a curved segment of roadway

A final configuration relevant to SPR measurement is shown in Fig 1c where the course segment is defined by a series of two or more curves arrayed in in a serpentine or winding fashion. Within this type two alternative occur depending on whether the designated “legal path” of the course is permitted to cross the centerline of the road (or any lane line, for that matter). In this scenario, the procedure for measuring the tangent line is similar to that of opposing turns, but the skill of the measurer is even more important in producing an efficient measurement.

How are turnarounds measured for SPR?

A turnaround is the defining characteristic of an out-and-back course. It is also a feature in other types of courses and is generally configured as an out-and-back spur that diverges from and returns to the main street network of the course. Turnarounds are almost always, but not necessarily, located in the center of the running path (roadway).

basic turnaround styles need to be distinguished for purposes of measuring the SPR: the point turn and the radius or semi-circular turn. Point turnarounds are more practical and simpler to set up and to measure that radius turns, but the SPR measurement of radius turns is more likely to track the runner’s actual path. Figures 2a and 2b below illustrate this distinction quite clearly. 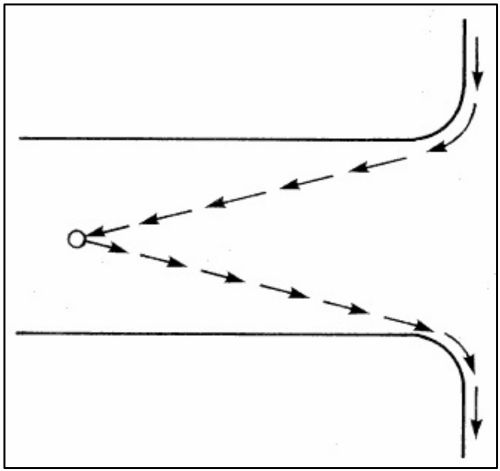 Fig. 2a. The SPR of a point turnaround

As previously noted, a point turnaround is easy to establish and maintain from year to year. The disadvantage of this type of turnaround from the perspective of measuring the SPR is stated succinctly in the Course Measurement Procedures Manual

When a course is measured to a single point, reverse direction and then back, no allowance is made for how runners actually run the turn. Marking a turnaround with a single cone ignores the semi-circle path taken. (Emphasis added.)

Relative to the total distance in a 5K course, for example, a point turnaround does not significantly lengthen the actual distance a runner travels. But from the standpoint of course design, and depending on the size of the field (the number of runners in the race), this type reverse-directional configuration causes runners to break pace in order to navigate the sharp, acure turn, which can also pose a safety issue. This potential problem is compounded if the running path (roadway) is relatively narrow and the field is relatively large, causing mid-pack runners to bunch up and crowd one another around the turn. 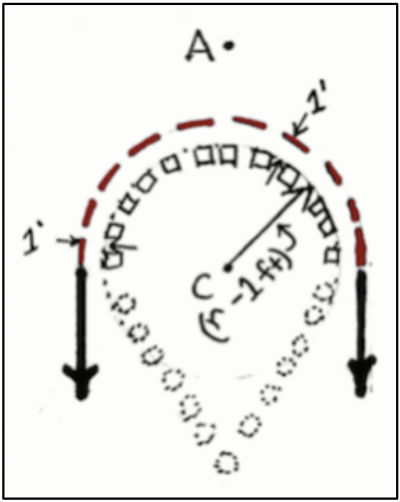 Fig. 2b. The SPR of a radius turnaround

Fig 2b shows a radius turnaround as depicted by the red dashed line that forms the SPR arc described by the radius from the center point “C” of the semi-circle. Depending on the length of the radius forming the arc, it’s easy to see how this type of turnaround offers a more fluid, stable and natural way for runners to reverse direction on a road course. (Indeed, this type of turn is required in most race walk course closed loop configurations, as point turnarounds are not allowed.)

Particularly in courses with stationary start and finish lines that cannot be relocated, the difficulty in setting up a radius turn lies understanding the geometric formula involved. Without getting into the weeds with the mathematics that are involved, let’s just say that once a radius turnaround is established, it is easy to measure as part of the SPR for certification purposes. The other difficulty in using a radius turnaround stems from the more practical consideration of ensuring that all of the points that define the described arc can be set up annually for each edition of the event. Logistically speaking, this can be challenging, especially if the person setting up the course in subsequent editions of the event is not the same one who set it up initially. In recognizing this trade-off between the two styles of turnarounds, the Manual advises measurers to consider establishing and detailing both types of turnarounds on the certification map as a safeguard against just this type of situation.

1. An example of SPR marking in a local regional event is the Syracuse Festival of Races 5K course designed and measured by the event’s race director emeritus Dave Oja.

2. “Verification” refers to a re-measurement to check the length of a certified course.

[Next month: How is a certification measurement done? What are the practical considerations?] 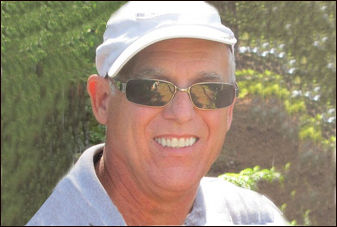 Jim Gilmer has measured more than 225 courses for certification since he began measuring in 1995. He is the USATF Regional Certifier for New York and an IAAF Grade A Measurer. In 2018, Jim was awarded the USATF/RRTC Ted Corbitt award for his contribution to course measurement and this year was the recipient of the President’s Award by the USATF Adirondack Association.