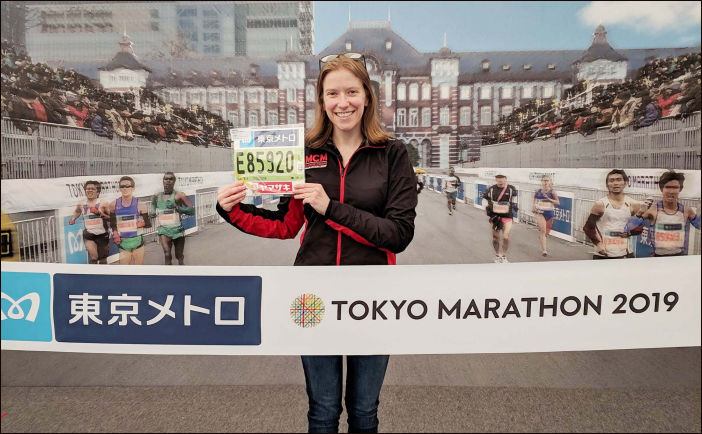 My journey to Japan began in September last year.

In early 2018 I decided that one of my lifelong bucket list items was to run all six of the World Marathon Majors – Tokyo, Boston, London, Berlin, Chicago, and New York City. I entered all the race lotteries learning that the Tokyo Marathon was one of the most difficult lotteries to get into. Fewer than 10% of entrants get selected, so I thought little of it after I entered the lottery in August, completely putting it out of my mind. Imagine my surprise, then, when I received an email in late September informing me that I was selected to run in the Tokyo Marathon. I was shocked! It was time to plan my trip to Japan!

Fast forward to Thursday, February 28, 2019. My friend Megan and I had an early morning flight out of JFK for the Sunday, March 3, marathon. On the first leg of our flight I ate something that did not agree with my stomach, which made the second leg from Beijing to Tokyo and the rest of our first day in Japan miserable for me. I worried about what impact this would have on my race.

Fortunately, a good night’s sleep and a hot shower did me wonders. I woke up Saturday morning feeling much better. After getting some much needed food in my stomach, Megan and I ventured to the race expo to pick up my packet. The expo gave me my first glimpse into just how well organized this race was going to be. People were lined up in an orderly fashion to enter the packet pickup tent, and were then directed to the appropriate table based on whether they were a Japanese or an international runner. There were many English-speaking volunteers to direct runners. The entire process went very smoothly and very quickly. After, we were then able to wander through the expo and check out the various booths. As it was the third day of the expo, a lot of the commemorative clothing was sold out, but I did manage to snag a pair of ASICS Tokyo Marathon sneakers, which are pretty cool. The Expo, and the entire country itself, also promoted the 2020 Summer Olympics to be held in Japan – the Japanese are very excited about this. 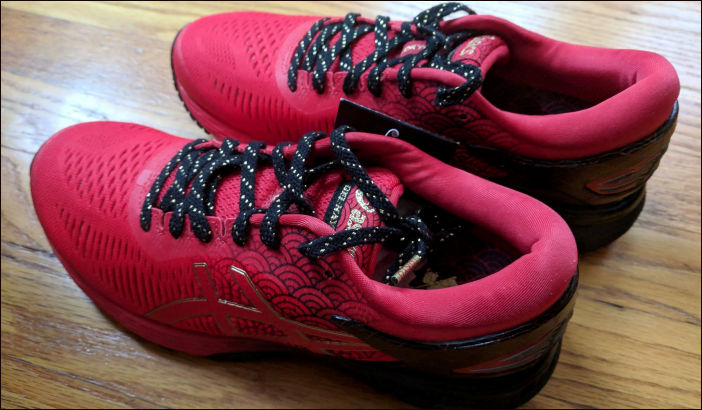 The rest of our first full day in Tokyo was spent visiting the Tokyo Skytree, the tallest tower in the world, for spectacular, sweeping views of the city. After, we went to an Italian restaurant for pizza and pasta to carbo load before the race (and to eat something that I knew would agree with my stomach – I wasn’t taking any more chances before the race). Although I got to bed early, I had a restless night periodically waking up after dreaming that I had overslept and missed the race. 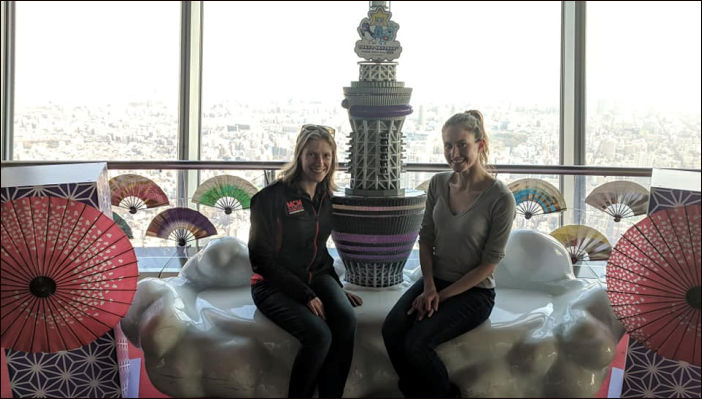 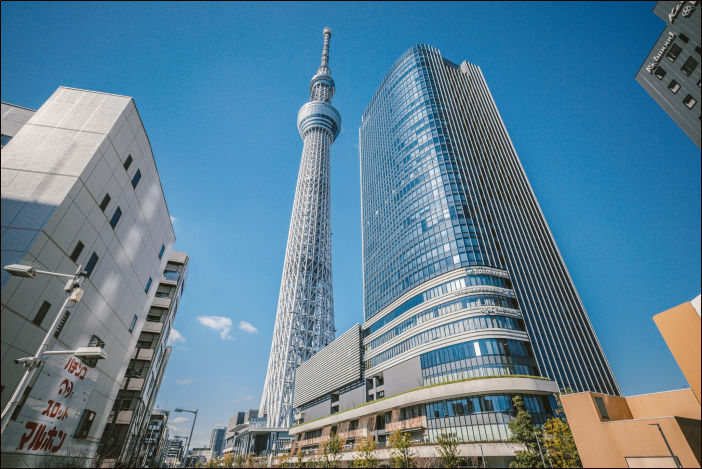 The race started at 9:10 AM and our Airbnb was only about a ten minute walk from the start line so that meant that I didn’t need to wake up until 6:30 AM, which was a nice change from some other marathons I’ve run. I ate a granola bar and a banana, got dressed, pinned on my bib, and secured my timing chip to my sneaker. The weather forecast was calling for rain, but I hoped that it would hold off until after the race had begun. I stepped outside to realize that unfortunately it was already raining.

I took off in search of the starting line. Security at this race was really tight. At the expo, participants were given a bracelet to wear that would be scanned when they entered the race starting area to confirm that it matched their bib number. Participants also had their photo taken at the expo and were informed that facial recognition technology would be in use along the course. All participants had to go through metal detectors to enter the starting area. Again, this process was well marked, smooth, efficient, and fast. Once I entered the starting area, I searched for the porta potties. Even the lines for those were well organized and efficient, and so different from most American races I’ve been in!

There was a brief bottleneck getting everyone into their respective corrals, but it was an orderly process. Once all of the 35,000 plus runners were lined up, the mayor said a few words, a choir sang the national anthem, the elite athletes were introduced, and then the starting gun sounded! A Jumbotron was set up so that all runners could see the start of the race. It took me about seven and a half minutes to cross the start line and officially begin my Tokyo Marathon journey!

The course was pancake flat except for a few small bridges that we had to cross. The first 5K of the race took us into the heart of the city and then the race consisted of several out and backs through downtown. Those were cool because we were able to see the elites run past. The last 10K out and back was mentally difficult because one could see the lead runners who were almost done. You just wanted to be on the other side of the road!

Because my object was to have fun, I had no expectations and no pressure to run a certain time. I also normally run with music, but I decided against it that for this race. I’m so glad I made that decision because I was better able to take in the whole experience. I might never run this race again so I figured I should just enjoy it. I was awed by the sheer numbers of runners from so many different countries. I enjoyed talking to a few of them. I also absorbed the sights along the way (shrines and skyscrapers), listened to the music blaring along the course (from the YMCA, to Taylor Swift’s Shake It Off, to traditional drum and dance groups), and took in the numerous smiling volunteers and cheering spectators that lined every bit of the street.

The last 10K was difficult, especially since I was now cold and wet. But I was able to power through and suddenly we made the turn for the final kilometer stretch to the finish line. I was able to finish strong and my legs felt good after.

My only complaint about the race actually has to do with the post-finish line experience. Usually there is a party aura after crossing the finish line but not here. Runners had to walk a long distance to get water, food, a mylar blanket, finisher’s towel, and medals. The popular Japanese sports drink, Pocari Sweat, was also provided. We were then funneled into a chute that led to the subway instead of a meeting area for friends and family. Consequently, it took me a while to find my friend Megan.

After the marathon, Megan and I explored Japan and loved what we saw. Tokyo was thrilling with its big city feel and Kyoto was impressive with its history and beautiful temples. 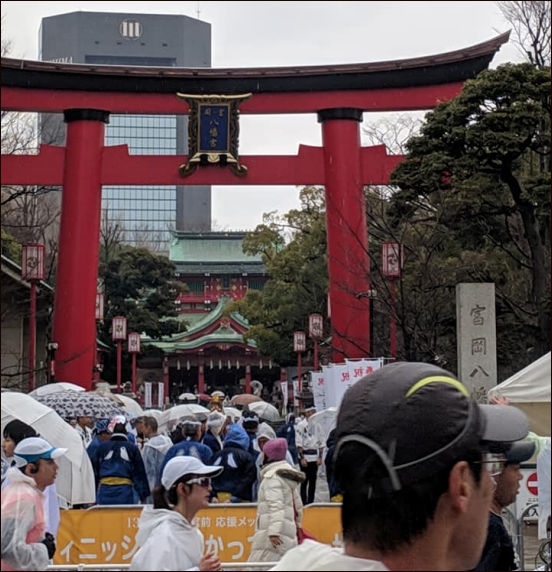 Overall, though, the Tokyo Marathon was an amazing race experience! I am especially thankful for all of those smiling, cheering volunteers and spectators – they really made the race that much better and easier. If you ever find yourself in Japan in late winter, I would highly recommend this race! 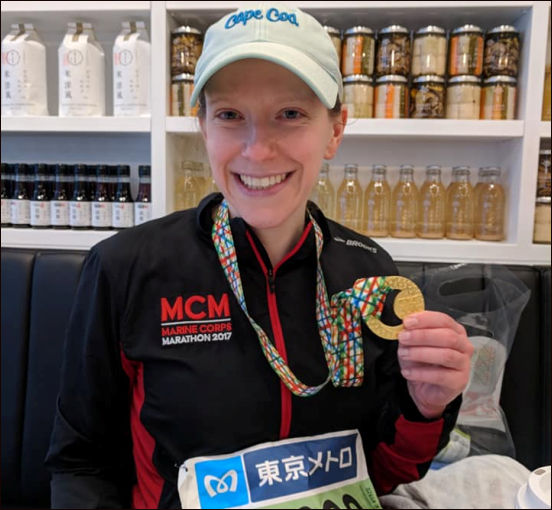