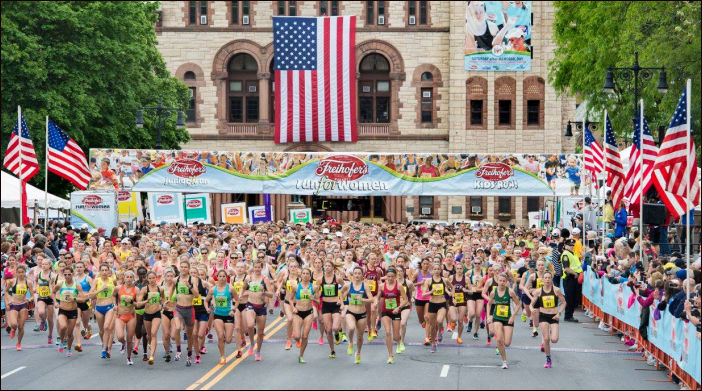 This year the Freihofer’s Run for Women hits 41. It is pretty remarkable to have a race of 41 years with the same sponsor. It showcases the Freihofer’s Baking Company’s commitment to the community. The race has had different offerings over the years, but has always been an event that brings people together. It is a morning where women can focus on themselves. Whether it is finishing the 5K, running more than walking, getting a faster time or just battling demons that say it can’t be done, the women on the course are doing it together. 3,000 women standing on Washington Avenue waiting for the gun to go off creates a level of energy like no other race. Even the elites who are battling for a paycheck are there to support each other. The Mom who is running for the first time after giving birth to a child with developmental disabilities to the sister who is running to honor her mother’s battle with breast cancer to the daughter who was told she would never walk again after a horrific accident; they are on the line with the one thought, cross the start line and celebrate the finish line.

As women move up Washington you see thousands of hands wave at the cameras. There is a smile on the faces that doesn’t tell you the story of how they got there. It just shows the gratitude for being there. Much is written about women bringing women down, but not at the Freihofer’s Run for Women. This is where we all get lifted higher.

If you have stood on the start line, you understand what I mean. Are there nerves? Of course. But the excitement and joy is palpable. How do you get that across to someone who has never been to the Freihofers Run for Women? We try with videos, photos, and stories. But somehow we still miss some ladies. Maybe they think you have to run - you don’t. Hundreds of women walk the beautiful 5K course. Maybe they think it is too many people - it isn’t. While there are 3,000 women starting the color-coded start allows for a nice flow of runners and walkers up Washington Avenue. Standing on the start dais it is absolutely amazing to feel the power and joy as they move by almost in a swell of energy. The colors and vibrancy of the race are like none other (wait until you see this year’s shirt color). Maybe they think they are too old or too young, or too thin or too heavy. No. When you show up at the start line, you will see women who look like you and those who don’t. Some will be ahead of you and other behind. And yet everyone flows in the same direction with the same goal - at least for that hour on June 1, 2019.

Not everyone wants to ‘race.’ We get that and this event is so much more than a race. If you want to PR, then register and put in your time. You’ll be seeded with ladies who are running the same pace and can help pull you along. But for those who don’t enter 5Ks because it is called a race. This is the event for you. Shop at the Expo on Thursday and Friday. We will have awesome vendors there with great products, information and of course freebies. You’ll sample yummy foods and grab lunch or dinner to bring home. Saturday morning you’ll arrive, take photos, warm up and soak in all the energy. Maybe you’ll stop to grab some photos with friends in the park. Cross the finish line and the celebration continues. More photos, food, hugs, singing, dancing and hanging with friends (old and new). If you don’t want to listen to the band, then head over to the start of the Junior 3K and Kids Runs. Kids live in fun mode and we can learn a lot from them. Watch the energy at the start and the fatigue at the finish. These athletes will push themselves and gain confidence in the ability of their bodies and minds.

So maybe you are a veteran runner or maybe you just joined HMRRC and aren’t sure what race to run in June. The Freihofers Run for Women should be on everyone’s list. It is also the Women’s championship for the USATF Grand Prix this year.

Guys we never want to leave you out. This race can’t happen without many volunteers and the vast majority are men. The women’s running community thanks you!

Sign up today at www.freihofersrun.com and we will see YOU in 2019 on June 1. 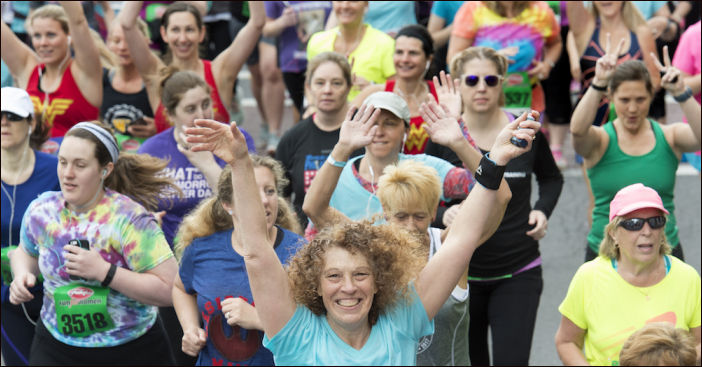