Michelle Pratt – The Next Step

by Christine Bishop, with lots of help from Michelle! 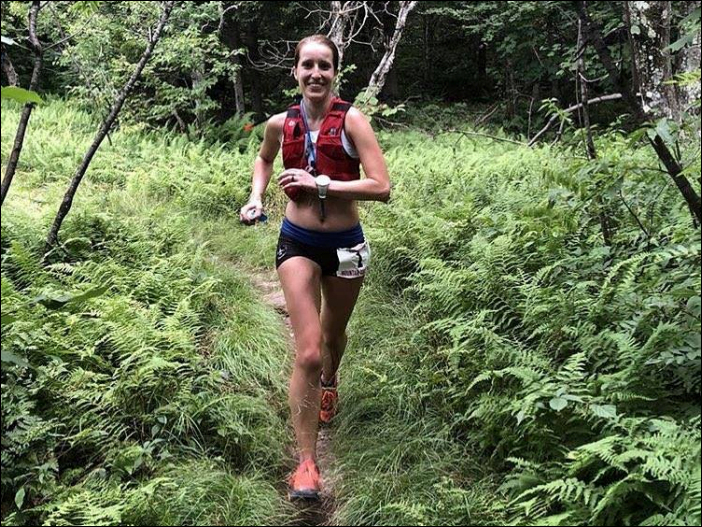 In this, our second interview of running phenom Michelle Pratt, we are checking the progress on her awesome 2018 running agenda consisting of five 50Ks topped off in late October by the Javelina Jundred 100K. The latter is a rugged trail race punctuated by great parties. An experienced trail runner for her age of 29, Michelle ranks 92% in the United States. So far her path as expected for a trail runner has been bumpy full of twists and turns but glorious nonetheless. 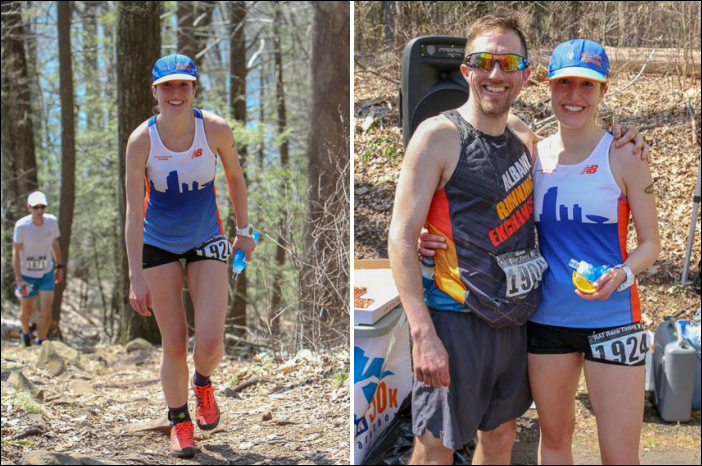 First on her list was the Trap Rock 50 on April 14, in Penwood State Park in Bloomfield, CT. Having been training in frigid Minneapolis she left in a blinding snowstorm to land in a seemingly tropical Connecticut with temperatures in the 80s (in April!) to return days later to her car buried in snow. She ran neck and neck with the other two leading women even talking as they ran, which is a rarity in competitive races. The heat however got to her and she ran out of water. Her time of 6:02 was good enough for second place and 12th overall although not what she hoped for. Interestingly her friend Jim Sweeney of Albany came in 4th overall. 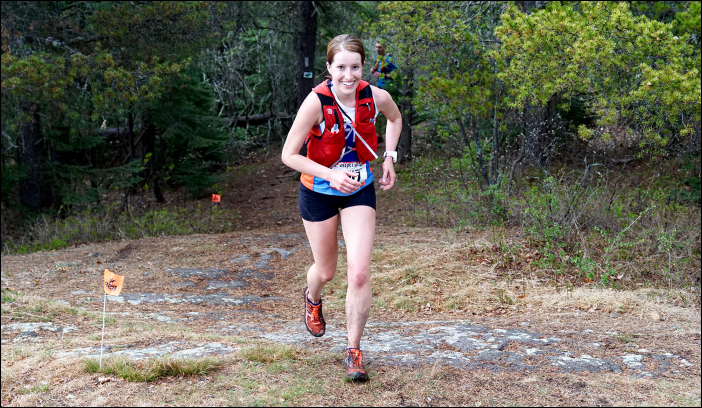 Her second race, the Superior 50K, was quite different. She ran on familiar turf in Lutsen, Minnesota, on May 19 although she had only seen one and a half miles of the race trail that was under two feet of snow. She entered the race by lottery, which she thought a good omen. Because the race is quite competitive she hoped to finish in the top ten. In a twenty mile race the week before Michelle was beaten by a woman who she would face in the Lutsen race. This, however, was to be Michelle’s day although it didn’t start that way. The first ten miles were relaxed although her stomach felt odd but this feeling disappeared several miles later. Then her watch died. She had never run this race before so she had no idea how to gauge her time or when to take her gels. Fortunately the watch gave her the time but no GPS. So, she calculated her distance and speed by time. Because she worried about running too slowly she actually ran faster than if her watch had worked. With seven miles to go she began passing people and was soon in first place. To her amazement she came to realize that she had a chance of breaking 5 hours. This motivated her to push even harder. She became so focused that she failed to notice how beautiful the trail was even in May when the trees were still without leaves. She was so heads down trying to stay ahead that she even missed the awesome turn around point which is the highest in the race supplying a magnificent view of the lake. Slightly muddy when she finished in first place Michelle was delighted at her performance especially because she knew so many people at the race. Clearly Michelle ran a great race. To find out more, click on 2018 Superior 50KM Interview. 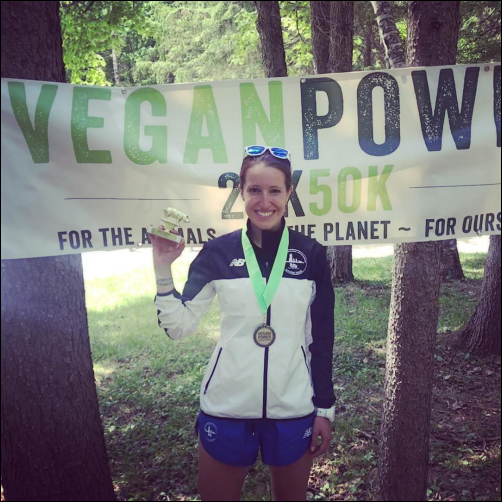 Michelle’s next race was the Vegan Power Race on June 16, in Pittsfield, Mass. Excited to run in a place she had never run before, she was surprised how easy the trail was although she had never done a course with six five-mile loops. She was in the lead almost from the beginning. However, this was not her favorite kind of race and by loop three, course fatigue had set in. Her parents who were crewing her though loved the race because they got to see her run by six times. Her fiancée, Josh Merlis, who was working a race in Westchester in the morning, managed to get there with 10 minutes to spare seeing her finish. They partook of the great vegan treats served at race’s end. Michelle finished first among women and 9th overall in 5:12:57.

She backed out of the Finger Lakes 50K because she did Vegan Power two weeks before. Her coaches Elizabeth Azze of Mountain Peak Fitness and David Roche thought training would help her more than doing two major races within a week. She still went to the Finger Lakes Race since Josh was timing it and her friend Alanna Moss was doing her first 50 mile race. Michelle paced her for the last lap and Alanna won her first 50M title.

After that she did a month of training prior to the Escarpment Trail Run, which is a 30k in the Catskills. It is as she says a race that eats its young and is the brainchild of the incredible Dick Vincent, who also happens to be the person who will marry Michelle and Josh in December. The Escarpment Run gave her elevation training, difficult in Albany except for runs to Thacher Park and the Devils Path in the Catskills. When she and Josh visited the Grand Canyon in July, Michelle ran up the canyon demonstrating her fitness. Not even Grand Canyon was too much for her! 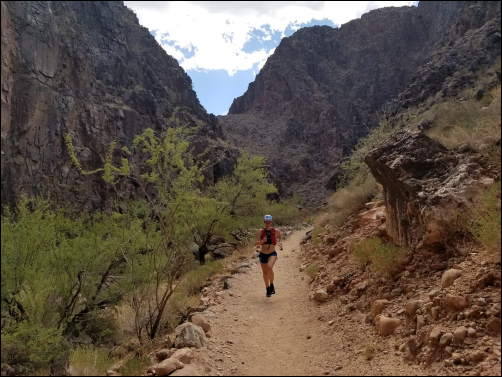 During the month of August she devised a running program to encourage women trail runners and ultra marathoners. 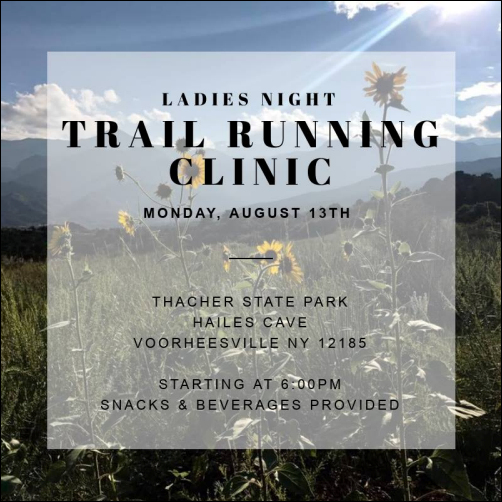 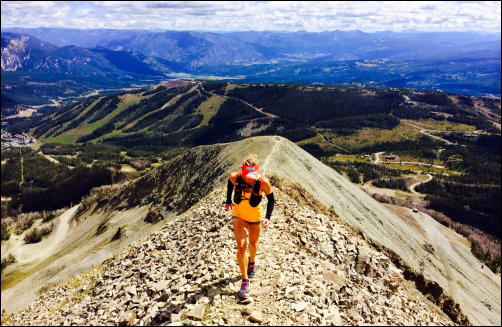 The big feature for Michelle is The Rut in Big Sky, Montana, on September 3. She and Josh are doing it together since she gave him an entry ticket as a birthday present. He wrote the following on Facebook about it: “We’re in Big Sky, MT for Sunday’s The Rut 50K. We are doing an experiment to see what happens when one person trains for it and other watches that person train for it.”

The designers of the race state:

The Rut 50K is an extremely challenging mountain run held on Big Sky Resort property. Race participants will find themselves covering ALL types of terrain including jeep roads, forested single track trails, alpine ridge lines and even to the iconic summit of Lone Peak (11,253 ft.)!

There are sections of this course, including the ascent and traverse of Headwaters ridge, as well as the ascent and descent of Lone Peak, which are EXTREMELY STEEP & TECHNICAL with sections of exposure and potential rockfall hazard.

It only allows 750 runners to participate yearly and if the ascent of Lone Peak is not enough to deter you, it has a section called the Bonecrusher. This is not a race for the faint of heart or for those suffering from acrophobia. Michelle hopes to be in the top ten of women.

I contacted Michelle soon after she finished the race to find out how it turned out and this is what she wrote after running 50K several hours before on an incredible terrain:

It was the hardest race I’ve ever done! Josh and I both finished (yay!) — he did beat me. Josh ran just over 7:51 and I ran just over 8:20 and was the 25th female. I wasn’t quite sure how long it would take me so I ran totally on feel and just enjoyed the adventure. We started in the dark and ran with headlamps for about 45 minutes — which is the first time I’ve ever used a headlamp in a race. The sunrise was absolutely awe inspiring — as were the other runners. Over the past few days, we’ve made some friends and had a chance to spectate the VK and 28K so it was fun to see other runners and new friends out cheering on the course. We had absolutely perfect weather — and fortunately we were not affected by smoke from the wildfires. The RDs and volunteers have done an absolutely incredible job with this race and I would highly recommend it to anyone looking for a serious adventure. Not being afraid of heights is helpful considering there are some ledges that, should you fall, it would be several thousand feet down (I have never feared for my life while running before). It was also incredibly humbling to be around so much talent. Over the weekend we saw many elite athletes. On top of that, the female winner finished in a time about 2 hours faster than my finishing time. So impressive! In short: the mountains were big and steep but it was a wild adventure I’ll never forget and am so grateful for the opportunity to be able to do runs like this. 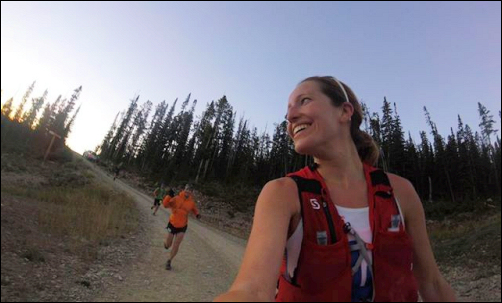 Next on the agenda is the Javelina Jundred in October followed by the Black Canyon 100k this coming February. These two races represent a step up in the distance category for Michelle. She is anxious about charting new territory but is looking forward to the challenge. She doesn’t know how her body will react but feels bolstered by her smart training and by those coaching her. She has never been injured and other than occasional tight muscles, she is rearing to go.

Her ultimate goal is the Western States 100. Next year she plans to run her first 100 miler to qualify for it. She always imagined it would be the Vermont 100. She and Josh volunteered this summer for the race and while there met Mike Austin, who came in ninth, and many other people they knew. The big surprise though came when they discovered that Vermont awards the top ten males but only the top FIVE females! So she will not do this race unless they change the prize structure. She cannot support a race that does not treat male and female runners equally. The race director, who surprisingly is a woman rationalized that prizes were given to the top 4% of runners and since more men were in the race, more men won prizes. When Michelle asked the director if there was movement to change the prize structure she was told there might be but nothing definite. Michelle’s plans are now in flux but her first 100 miler will only be at a race that offers equal awards to the sexes.

You, our readers, are to rest assured that we will continue to monitor Michelle’s trail and mountain running progress and will keep you informed. Whatever 100 miler she chooses, we will let you know, and will guarantee that the race will treat the sexes equally. Our final words about Michelle’s odyssey come from Josh, her fiancé.

Non-runners think I'm some crazy runner. I'm not, Michelle is. She wants to do a 100 Mile race next year. (Well, she's wanted to do one for a while but we agreed that it can be her birthday present next year.)

WHAT KIND OF A BIRTHDAY PRESENT is that?

In the meantime, she's been learning everything she can about running a marathon (well, 4 of 'em at once) while I'm researching how to make Hudson part of her crew team.

Links in the article:

Welcome to The Rut 50K 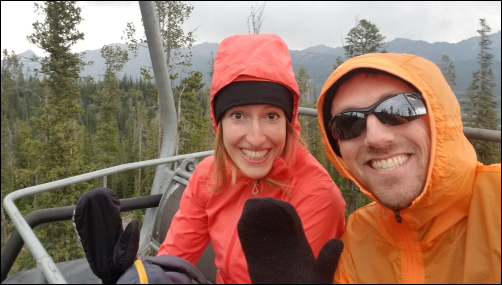 Michelle and Josh getting ready for The Rut!