In the mid 1970s Barry Hopkins had lured me into trail running. We would often run around the trails and old carriage roads through the “Pine Orchard”, the wonderful property around the shores of North Lake and the famed Catskill Mountain House. I came to love those trail adventures and looked forward to each and everyone. I kept hearing about this “Escarpment Trail” along the top of the Wall of Manitou, in the Northern Catskill Mountains near my home. The idea of running it fascinated me but whenever I brought the idea up with someone, they quickly dismissed it as lunacy.  Trail racing hadn’t yet become a part of the running world, let alone trail racing something so highly technical and challenging. The verdict among friends was unanimous: It was too far-fetched of an idea to merit serious consideration. There was the Dipsea Trail run in California, the Pikes Peak Marathon, and the JFK 50, and maybe another one or two that were overlooked. But as for highly technical mountain races; there was none. Still, I felt compelled to stage the event. 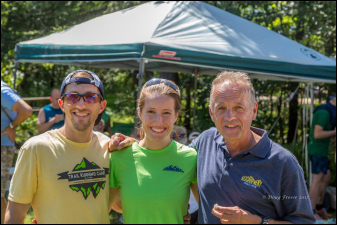 I had meant to run the Escarpment beforehand to see what all the fuss was about, but I never did run the entire trail before going ahead with scheduling the event. I made an application from a mimeograph machine, circulated it to a few running clubs and among friends. There wasn’t a big response but enough to have a race. On the last Sunday of July in 1977, 22 hardy souls met at North Lake, piled into the back of my brother’s rack truck, and drove over to East Windham to start the run of 18.6 miles (30Kilometers) back to North Lake. With no aid stations along the way, I suggested that runners carry water. Hydration packs and water belts had not yet been discovered, so it would have to be a hand held bottle or a wine skin.  When I saw that nearly everyone was going to run without water, I ditched my wine skin too. As it turned out only the winner would carry anything to drink.  At the shout of go, we ran off into the mountains, having very little idea of how long it would take to finish.

Paul “Bob” Enwright claimed victory in that first race in 3 hours 26 minutes, followed closely by the then legendary ultra road runner Billy Lawder. Ten minutes later I found my way to the finish line, thirsty, scratched, but due to good weather, none the worse for the wear. Hoping to hear positive feedback about this first race, I went over to ask the first two runners. Under a tree sat Paul and Billy, looking pale and covered with salt. I anxiously asked them what they thought of the race. It seems like an eternity passed before any response, but then Billy looked up at me with no expression on his face and said matter-of-factly, “Somebody is going to get hurt badly out there today!”. Uhoh, maybe this wasn’t such a good idea after all!

Nearly a half hour passed before the rest of the field began to stumble in, but in they came. All were very thirsty, some bruised, but very excited. They sprinkled in for the next 3 hours until we were all home safe and sound. Around a picnic BBQ, grand stories of the day were shared. As the joy became to pour out, it was clear we had just done something very special. A race was born.

There were no awards that first year; it was clearly stated on the application that the reward for this race was to run in the mountains, among friends, to finish and enjoy the experience. We have never had awards from that first race to this very day, a race that is now 42 years old.

Within a few years after the first Escarpment, Fred Pilon (founder and publisher of Ultra Running Magazine) started the M&M Trail Marathon in Western Mass. Another finisher, Fred Ross, began the Pisgah Wilderness Run in N.H., also 18 miles. The three races teamed up and formed the Northeastern Trail Runners circuit. Soon another new race, the Soap Stone Trail Half Marathon was added. New Trail Races were coming to life every year and by the late 80’s the Northeastern Trail Runners Circuit was bulging with events.

There are a gazillion reasons why people transition to trail running from road running or other sports. Each has his or her own reason and story as to why. A good friend of mine, Damon Douglas was one of those people. Damon ran 24 Escarpment Trail Runs before an accident would cut his life short. Years before his death Damon wrote a letter to a friend and he explained what trail running meant for him. With permission from the Douglas Family, I share some of that letter with you.

"What is it like when a day of running ends and I come down out of the mountains? Though my thighs are not always able to lift the foot high enough to avoid stubbing that right big toe, I am strong. With my limbs caked with mud and my clothes soaked with sweat, I am clean. Though fatigue pulses through every nerve, I am well rested. With my skin torn from brambles and from poking Balsam fir, I am whole. And as to living longer? My birth certificate shows that I've been around for 46 years, but the mountains and I are eternal. We will visit together as often as I can manage. And one peaceful day, I will return home forever."—Damon

What Others Have Said About it:

Trail Races You Probably Don’t Know About – But Should

These hidden-gem races fly largely under the radar, but they're just as worthy as their bigger, more popular brethren.

Back in the 1970s, there weren’t many trail races around New York’s Catskills Mountains, where Dick Vincent would routinely run the treacherous, remote Escarpment Trail.

The Escarpment Trail is replete with boulders, treacherous descents and sketchy ridgelines; there are no road crossings, and all aid stations are packed in. Runners who find themselves hurt or otherwise wanting to abandon the race have no real recourse but to finish. This explains the race’s stringent qualification standards and its motto: “Mountain goats only.”

The race is chip-timed, with mats at the beginning and end of some mid-race climbs to determine informal King- or Queen-of-the-Mountain titles. The course jumps so immediately onto singletrack that racers have to line up nearly single-file at the start line.

Vincent also takes pride in the race’s retention of its old-school charm, even as the 42nd running approaches. “There’s no swag, and no awards,” he says. “I always say the reward is running in the mountains.”

Where: Windham to Hunter, New York

Register: Runners who meet the standards for entry can apply (and find those standards) on the race website

The granddaddy of extreme sports, the Escarpment Trail Run is now in its 36th year. Entrants traverse this famed Catskills trail, a rock- and root-strewn single track that ascends — and descends — five of the mountain range’s highest peaks, with an elevation change totaling a whopping 10,000 feet. Not an obstacle race per se, runners nonetheless must contend with downed trees, slippery rocks, various types of wildlife, and sections that require hand-over-fist climbing up (or down); few make it to the finish line (which can take from three to six hours or more) without experiencing at least one painful fall. Previous marathon or similar long-distance running experience is mandatory, and — although the race offers no awards — “it sells out every year,” says organizer and Palenville resident Dick Vincent. “We get a nice mix of trail runners, road racers, and ultra racers from all over. One year, I had a guy from Hong Kong who came to run it.” Many of those who take on this challenge are over 40, says Vincent; amazingly, 65 percent of them return to do it again. “I think part of the reason for that is that everyone is treated the same way,” says Vincent. “First place is the same as last place. The mountains are the challenge.” July 29; www.escarpmenttrail.com

Read up on what it's all about.

Dick Vincent: 25 Years a Streaker: by David Blaikie (Ultramarathon World). Not about the race, but about its founder