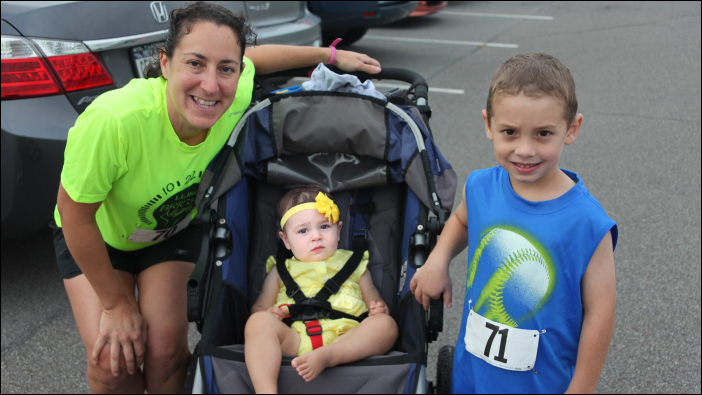 As spring came and the weather gradually got nicer we took the bikes out for a spin. My older son, Conor, had learned to ride his bike without training wheels last fall. Our younger son, Theo, eager to keep pace decided it was time for him to go without training wheels as well. After a few nervous attempts and some protest to put the training wheels back on, Theo got the hang out it. This seemed like a good time to upgrade both bikes and after a trip to the local bike shop we had two new bikes. Now that both boys were able to ride without training wheels and had newer, appropriately fitting bikes the distance they were able to cover was greatly increased. I was now able to take both them on a run with me while I pushed their younger sister, Evelyn, in the stroller.

After the first test run of twenty minutes went smoothly, we increased the length of each outing until the kids were content riding their bikes for an hour with me while I ran. During one of the outings before school let out we discussed what they wanted to accomplish over the summer. They asked if they could run a 5k. I told them I thought that it was a great idea. already run the Voorheesville 2 Mile on Memorial Day. Theo showed less interest in the whole thing and I was more skeptical of his desire to run a 5k. I kept that to myself and told them that if they kept doing so well on the bike rides and we practiced a couple of easy runs they could pick out a 5k to do before school started.

Training consisted mostly of biking. Several mornings a week we would set out early to beat the heat; the boys accompanying me on their bikes while I ran to start the day. When we had more time or on the weekends we would pick one of the local parks or bike paths to visit and get in the routine there. It served as a great way for them to stay active and explore new places. For the running I would pick one or two days a week and ask if they wanted to jog at the end of my run. This usually consisted of running anywhere from a quarter mile to a mile with them around our neighborhood.

The cool thing about kids is that they nearly always seem to rise to the occasion. Instead of complaining there were several times when I had to tell them they had already run two days during the week and that was enough. Or the time I had to explain to my older son why I didn’t think it was a good idea for him to run further than a mile for now. So far so good. After successfully completing the Colonie Mile both boys were on board to run a 5k. 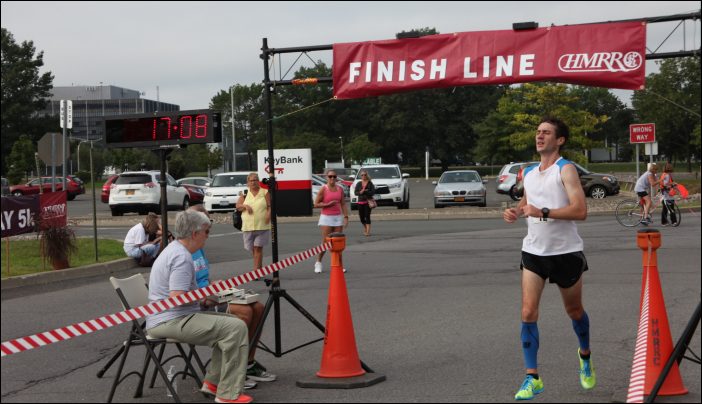 We decided to run the Labor Day 5k for convenience and because it would allow the boys to run in a race right before school started. The day of the race we showed up and got everyone’s bibs. Each of them approached the race a little differently. Conor, although more prepared, seemed less confident and said he wasn’t sure racing was for him. Theo, ever ready for a challenge, began the trash talking as soon as his bib was on his shirt. 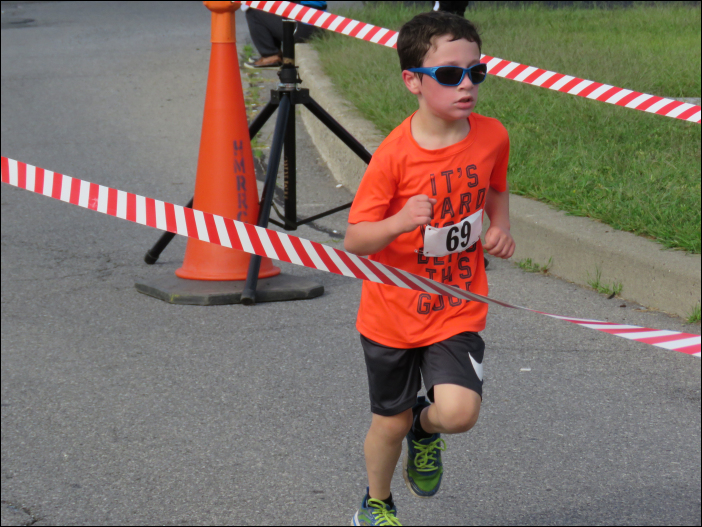 After finishing the 5k I headed out on the course to meet with whoever was coming in first. I was greeted by Conor. It was pretty hot out and he seemed a little discouraged. The site of me seemed to pep him up a bit and he responded by picking the pace up. I jogged with him to the finish with him in 26:52. I asked him how everything went and he said he went wasn’t sure he would run faster than 30 minutes but at the end he thought he could have gone faster. 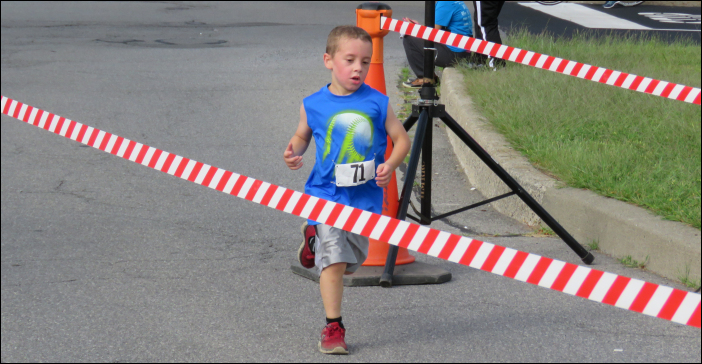 Next we waited for Theo and my wife Sara to come in pushing Evelyn in the stroller. When Theo came off the campus loop onto the finish he looked at Sara and said “bet you can’t catch me” and started sprinting as hard as he could to the finish. I had to warn him not to trip on the sidewalk as he finished up in 32:45. Sara followed quickly behind Theo. We had crossed a (co-ed) cross-country team across the line. Theo said he had fun but went out too fast and had decided to sit and rest briefly at the first water stop. If it wasn’t for that he would have been closer to Conor. Both kids enjoyed the race and had a positive experience. 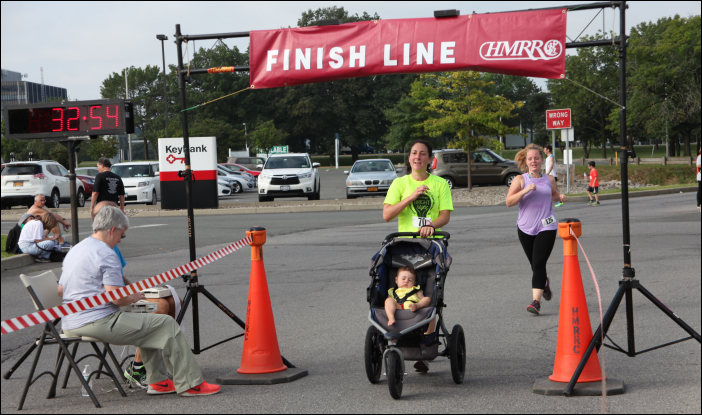 It was a lot of fun seeing the kids runs in a race. They had a great attitude going into and it was fun to show them what they could accomplish with some preparation. They had built up their confidence and had a lot of enjoyment over the summer by staying active.

At the beginning of the summer I was a little nervous about how the kids would respond or what my neighbors would think during the stints when we had to stay in the neighborhood and they saw the four of us (Conor and Theo on bikes and Evelyn in the stroller) doing loops for an hour. Or the late afternoons when they would jog with me around the half mile circuit in our neighborhood. Or maybe the trips to the bike path. After being endlessly harassed on runs throughout my life I’ve come to expect anything – there have been the “Run Forrest, Run “shouts, the time the group I was running with got pelted with McDonalds from a moving car, or the careless driver making a right hand turn without looking. Much to my surprise when we got stopped by a police officer during one early morning run, I was anticipating a scolding for not being far enough on the side of the road with them. However, I was pleasantly surprised when he gave them a “Citation for wearing their helmets.” This citation was good for a sundae at Stewarts. The second surprise came when a woman slowed us on the bike path to say, “You’ve got such a lovely family. It’s nice seeing the kids out getting some exercise. Keep up the good work.” Wow – again not what I had anticipated but I’ll take it for sure. Finally there was Theo’s friend who we spotted out running the half mile circuit with his father that we had covered all summer. The kids had a lot of fun preparing for the 5k and it felt good to have some good things happen in return!