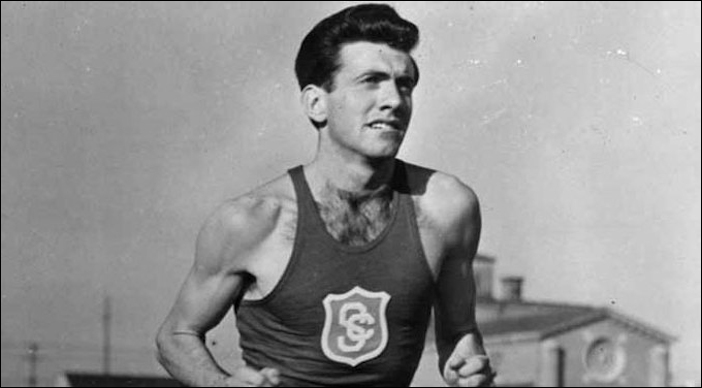 When Lou Zamperini was just getting started in his running career and then throughout his collegiate career his Sunday “workout” was to strap on a back pack and head for the hills.

Zamperini you’ll remember was the focus of the recent movie Unbroken and the author of his stunning autobiography about his Pacific Ocean survival and WW2 concentration camp experiences in Devil at my Heels.

At one time Zamperini held the national high school record for the mile. He enjoyed continued success throughout his collegiate at Southern Cal setting and holding the NCAA mile record for 15 years. At 19 he qualified for the 5000m in the 1936 Berlin Olympics, made the finals and finished 8th.

His life story was a series of ups and downs that included national championships, his Olympic experience and being a WW2 hero. But along the way there was a plane crash, the 47 days adrift in a life raft and the Japanese concentration camp. He rubbed elbows with Hollywood starlets and the preacher Billy Graham. When Zamperini died in 2014 at age 97 there was an understandable tinge of sadness but also a measure of doubt that he had actually died. He was the cat with nine lives.

Of special note in Zamperini’s training was the use of his weekly hiking. For those steeped in a distance or interval dominated approach to running taking a hike would be akin to a waste of time, effort or energy. Legitimate concerns may be – where is the transference? How could this help running? But on closer inspection the short answer is “a lot.” 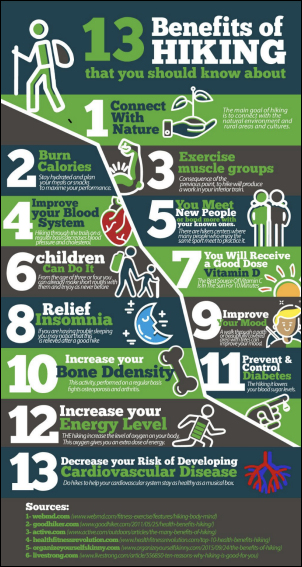 The simple act of walking three, four or more hours is not so simple. Add in the weight of a 20# back pack, hilly terrain going up and down and the challenge of footing that never presents the same step twice and the secondary benefits of walking become all the more apparent. Finnish Olympic champ Lasse Viren was said to walk up to 12 miles a day in addition to his running.

Some 35 miles east of Albany is the Vermont Long Trail. The VLT was America’s first long-distance walking trail. Construction began on the Long Trail in 1909 and was completed some 30 years later. Its current length is 274 miles as it winds its way north over Vermont’s Green Mountains and famed ski slopes (Stratton, Killington, Madonna, Smuggler’s Notch and Jay Peak) to the Canadian border. If you have ever traveled west to east across Vermont you have crossed the Long Trail. There are actually 19 roads that intersect the LT.

The LT is credited with jump-starting the environmental movement in the United States. The Long Trail was the example for America’s other long-distance walking trails that include the Pacific Coast Trail and the 2000+ mile long Appalachian Trail.

While there are only five peaks above 4000’ there are some 30 “mountains” one walks up and down. The total gain in elevation has been calculated to be 67,000’ of walking uphill. This necessarily includes 67,000’ of walking down the hills. While 67,000 is certainly a large number, putting that in perspective – Mt. Everest is 29,300’, so completing the Long Trail is like walking up Everest 2.3 times.

One of the nice things about the road crossings is that it allows for day hikes and the opportunity to experience the benefits of this form of exercise (or training) on a weekend afternoon.

While I would characterize travel on the Long Trail as remarkably safe there are some precautions that are necessary to insure one’s fullest enjoyment.

As with most trails there is a “carry-in, carry-out” policy. This includes yourself. There are no services in the woods, cell service is spotty at best. If you fall down, you get yourself up. The trail itself is marked with white blazes on trees and the path is well worn and easy to follow. Leaving the trail is almost always a bad idea.

While the terrain is ever changing a sturdy pair of shoes or hiking boots are strongly recommended. A backpack stocked with water (16 ounces for each hour of walking), snacks and some food will be greatly appreciated. Maps are available from the Internet or from the Green Mountain Club, the steward of the Long Trail.

For the truly urban runner this trip to the woods may prove disconcerting. But for those who welcome a change of scenery and a change of pace the occasional hike added to one’s training regimen will not only compliment one’s weekly routine it will also benefit one’s general fitness level and work capacity. 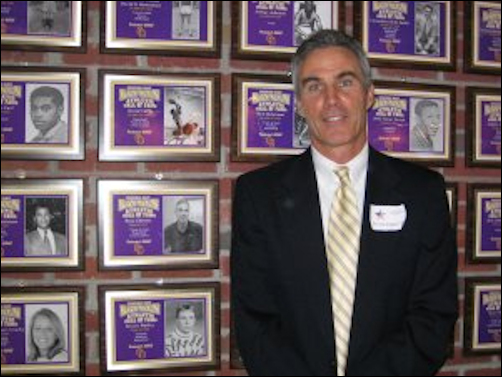 Russ Ebbets, DC is a USATF Level 3 Coach and lectures nationally on sport and health related topics. He serves as editor of Track Coach, the technical journal for USATF. He is author of the novel Supernova on the famed running program at Villanova University and the High Peaks STR8 Maps trail guide to the Adirondack 46 High Peaks. Time and Chance, the sequel to Supernova was published in May of 2018. Copies are available from PO Box 229, Union Springs, NY 13160. He can be contacted at spinedoctor229@hotmail.com

The Bijou Mile-Jog Down Memory Lane

Review of Time and Chance

Off the Road: Running Economy