I’ve run the Empire State Building Run Up (ESBRU) for the past 12 years in a row.  It is unlike your typical 5K in duration, and much stronger in intensity.  Winning times are usually under 11 minutes, and I finish around 12 minutes.
I initially qualified for this event by winning the Corning Tower Stair Climb.  The Corning Tower is 809 steps, and the Empire State building is just about double that.  If I were to compare the two races, the Empire State Building would be a 10K and the Corning Tower would be a 5K.
After finishing the Corning Tower, it can take one or two days to breathe through my nose without pain.  It’s a very intense activity, where the initial recovery takes longer than the actual event itself as compared to half a minute following a road race.  You can find people coughing for an hour or two after a race that only takes a handful of minutes.  This “climbers’ cough” and increased lung awareness leads to these stair climbs benefiting charities such as the Cystic Fibrosis Foundation and American Lung Association.  I was also humbled after my first stair climb, as I immediately thought of the firefighters going up the Twin Towers, not in t-shirts and shorts, but coats, gear and respirators going in the most extreme and deadly conditions. There is also the Tunnels for Towers Stair Climb that honors the brave firefighters that day. 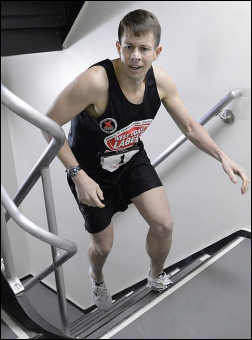 The Empire State Building Run Up is one of the most covered and coveted stair climbing races by the media and tower runners, held in one of the most iconic buildings in the world. It is one of the oldest stair climb competitions in the world, and brings world-class talent to the race each year. It is also one of the few events that has a mass start, as compared to most other races with individual time trials where runners are released into the stairwell 10 to 30 seconds in between each other. A decade ago, there used to be 75 runners in one heat, which provided for a very congested (and physical) start. It almost felt like making it to the second floor was the halfway point of the race. Those starts made me miss running 5K‘s, Workforce Team Challenges, and the Boilermaker. However, nowadays only 20 people start at the same time, which provides for a still crowded start.  The field sorts out over the first 30 floors of the event.

This race is a true test of endurance of the legs, lungs and heart. Runners average anywhere from 8 to 12 seconds per floor, followed with a sprint halfway around the Empire State Building observation deck.  It is an exhilarating feeling to cross the finish line and see the skyline of New York City. 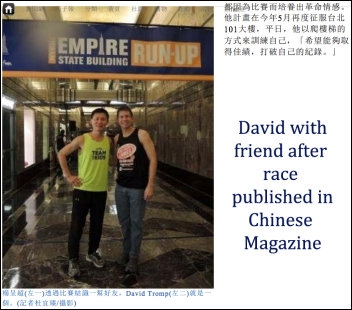 At the event, I’ve met a lot of great people from around this country and the world, from Germany to Czechoslovakia, Switzerland to Singapore.  I’ve been fortunate enough to regularly finish in the top ten overall, and top 2 or 4 among Americans.  It ranks right up there with finishing second in the national championships in Las Vegas.  The ESBRU is my Super Bowl of events, and something I start preparing for everyday from Thanksgiving through January.  After the race I take some time off and then start to train for the great races coming in the Capital region.