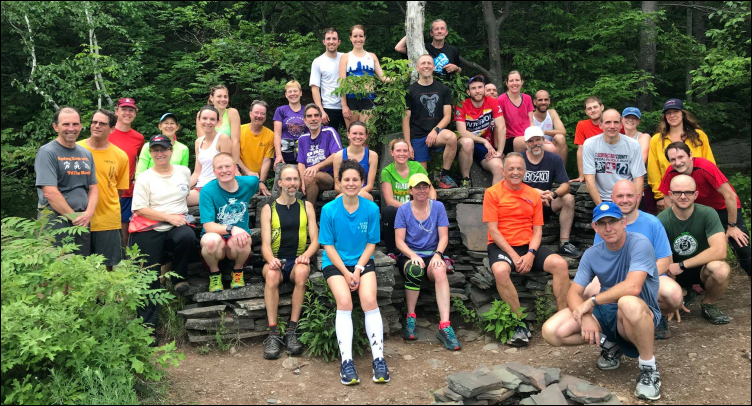 Once again this year Global Running Day has fallen, as it has since its inception in 2016, on the day of the High Rock Run Up. Because of this and the history of High Rock Run, we take claim to the day and make it our own. Jokingly, we say Global Running Day is the celebration of the High Rock Run Up.  But don’t let me sell you a bill of goods, High Rock could be the least popular run in the Hudson Valley.  It has always been on the first Wednesday of June since way back in 1994. The event really dates back before 94 as High Rock was a spinoff of the Otis Elevator Railway Run. Otis was the most brutal, less than a mile run, known to humankind. Scaling the old railway bed from Palenville to North Lake State Park, the ancient Otis Railway carried guests to the famed Catskill Mountain House in the late 1800’s. The railway was scraped for metal for WW1 and laid dormant for years. We began the run up the .95 miles gaining 1600 feet in elevation in the mid 1970s. Miraculously, Otis became a badge of honor race and we once saw a field of nearly 100 runners start on that first Wednesday in June for what was decades later to become Global Running Day. Although only .95 of a mile, Jim Kelly Smith, a sub 32 min 10k racer, held the course record of just under 17 ½ minutes. The women’s record of 21 plus minutes in 1988 by Laura Paddock who ran a 2:42 marathon that spring and won the Escarpment Trail Run in July. The late great Mike Kelly and past winner of Otis and the Escarpment Trail Run best described what it was like to race Otis Elevator. “It is like running your P.R. in the mile and then hanging on for 15 minutes.”

In 1994 when landowner issues prohibited us from running our annual Hammerfest on Otis, we moved the race to the High Rock course  and there it has been since. The race starts at my home and afterwards the group runs back to the start together where potluck refreshments are the only reward. In essence it embodies the spirit of Global Running Day as a small group of runners come from around the Northeast to run in the beauty and obscurity of the Catskills. The trail finishes on the High Rock (also known as Palenville Overlook), some 1300 feet above the hamlet of Palenville, America’s first art colony.

This year’s event was again low key and yet high energy. Less than 40 spirited souls toed the line and dashed off onto the mountain trail that leads to the finishing vista. The first ¾ of a mile is innocent enough, a wide dirt path, mostly flat. It is when it turns up that things get interesting. A dirt road quickly becomes single track trail rising past an old blue stone quarry, over downed trees on tricky mountain footing. Most runners are forced to hike much of the uphill, breaking into a run on the few false flat intervals between the rugged climbs. When the last of us grunts over the final climb that culminates on High Rock, the view of Kaaterskill Clove, the mountains, the Hudson River Valley to the east, takes away the breath each of us has just regained. We gather for stories, individual and group photos, before running as a group, back to the start. The shared friendship is probably what the founders of Global Running Day had in mind. One spirit, a single love of this sport, shared around the globe. This group didn’t need to talk about it; everyone knows without actually saying it. 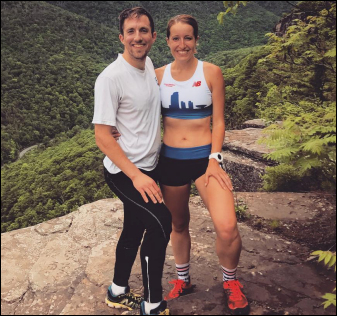 The first to reach the summit this year was Michelle Pratt, winner of the 2017 Escarpment Trail Run, and Mike Siudy, who last month set the fastest known time for trekking all 35 peaks of the Catskills in one journey.  144 miles on trails, and bushwhacking, some 139,000 feet of elevation, in 57 hours.

If anyone ever asks you where or how Global Running Day started, you can tell them the High Rock Run Up, or maybe Otis Elevator. You might not be completely right but you sure won’t be wrong. 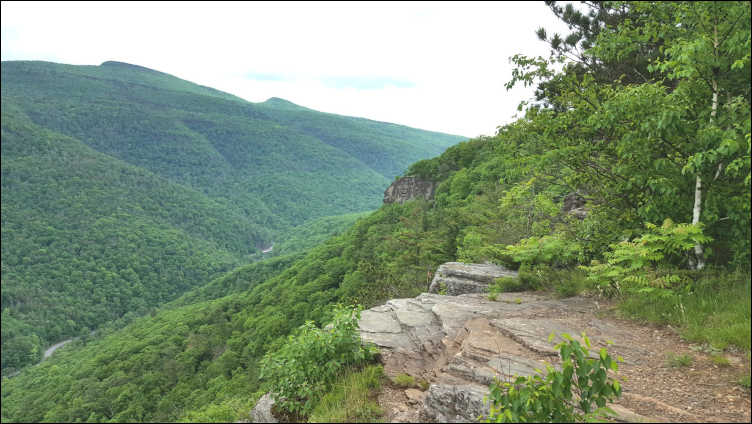