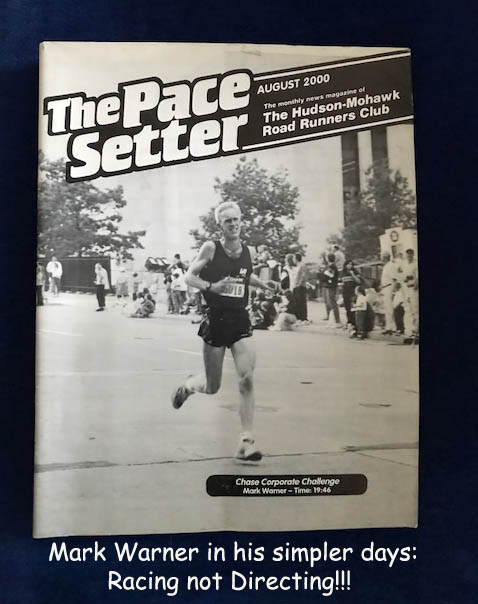 As far as races go, this one is a monster. Just to write about it is hard let alone to direct it. So that is where I will start with Mark Warner who has taken over the reins since 2013 and handled it superbly. Why anyone would do this enthusiastically with no pay is amazing on its own. He has to plan and worry about crafting a race for 10,000 yes 10,000 people and make sure that all goes well because as we know America is a litigious society, but a greater concern for him is ensuring that each person enjoys their run. Next he has to secure a network of likeminded volunteer captains who will coordinate a section of the race that will take them hours or days of planning and too with only the satisfaction of seeing the race do well. Breaking all rules of journalism, I will list the captains immediately and thank them for their selfless service:

This impressive list is only “tip of the iceberg” as far as volunteers go, but we will take a break so list fatigue doesn’t strike and instead will supply mind-bending facts and statistics designed to stimulate.

The HMRRC website furnishes the following history of the event.

Each year, the HMRRC and CDPHP select charities of choice – and encourage participants to donate to those organizations. This year, two charities of choice were named: the Albany Public Library Foundation and Regional Food Bank of NENY. We asked our race participants and volunteers to raise funds for our 2018 Charities of Choice and they responded with double over last year raising $45,000! Our highest fundraising team was GE this year under group team captain Aaron Knobloch! If you haven’t yet made a donation but would like to, there is still time. You can donate at www.cdphpwtc.com

While 10,000 runners whizzed by there was music wafting in the air from Playin’ With Fire, in front of the State Museum and Big Fez and the Surfmatics, Unfinished Business, and the Albany High School Jazz Band dotting the course.

Of course all this could not go on without financial support. First, a special thanks to our title sponsor – CDPHP. CDPHP has sponsored the Workforce Team Challenge going on 10 years. We also wantto recognize CDPHP for winning the JD Power award for the second year in a row. Congratulations CDPHP!  Next, we thank our media sponsor B95.5, and All-U for the great work they do year after year on the race t-shirts.

Of course, we couldn’t do this without the support of our …

And, now, for some team recognition …

The “largest participation” awards in several categories are presented to the teams with the most registered participants. The winners are:

As is evident, planning a race of this magnitude is quite an undertaking. We thank all involved and hope to see them running happily down the streets of Albany next year. In the meantime, consult our website during the coming year to see our progress for 2019!