"We're making a number of changes in 2018," according to Brian. "Some are in response to input we've received from runners and coordinators. Others are the result of ideas our team has been kicking around."

The former include minor changes to the course. The bike path section has been eliminated, for example. Many runners found the bike path in or near mile 1 to be too crowded. In 2018, runners will proceed through the Stockade down Front Street. The route through Vale Cemetery will see fewer turns.
And the prize money structure has been modified. While local athletes will still benefit from prize money set aside exclusively for them, prize money will also be available for runners in general. The amount of prize money has been increased to $7,875, with separate amounts set aside for local runners and all-comers. Local runners (and HMRRC members as of June 1, 2018), though, will be able to "double dip." If, for example, a local runner finishes third in the open category and first in the local category, he or she will be able to claim both cash prizes. The popular Clydesdale/Athena division has also been reinstated for 2018. 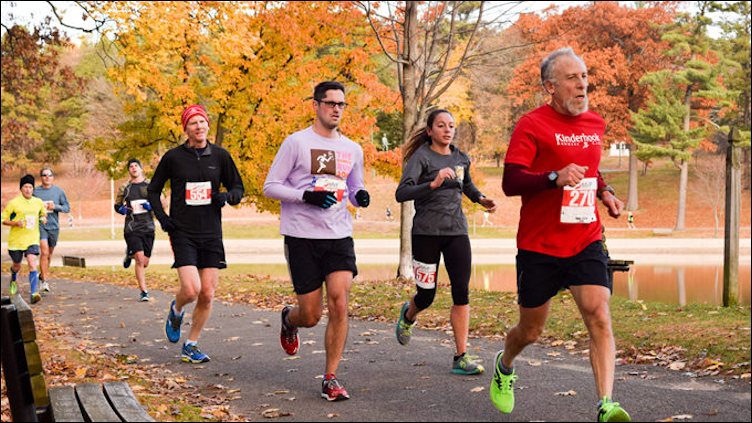 One innovation that was introduced in 2017 is being substantially modified. "The Stockade Cup Relay was a disappointment last year," said co-director Ray Newkirk. The relay, in which each of three team members runs a 5K leg of the 15K course, had fewer than 10 team entries in 2017. "We think that may have been due to the requirement that team members had to represent the same business organization," said Ray. In 2018, the Relay will introduce two new divisions; self-defined teams and veterans (including active military) teams. With self-defined teams, any three men or three women can create a team regardless of their employment affiliation. (There will be no co-ed teams in 2018.) Military teams (including active duty military) can consist of any three veterans or active duty personnel (male or female).

Because the 2018  Stockade-athon falls on Veterans Day in 2018, the race is making an effort to recognize service men and women, past and current. Active duty service members will get a small break on the 15K entry fee. And runners in the Veterans Division of the Stockade Cup Relay will be able to run free of charge.

Otherwise, the race's directors report, the 2018 event will largely mirror the successful 2017 race. All of last year's sponsors -- MVP, Fleet Feet, The Schenectady Y, The Gazette, and Great Flats Brewing -- are on-board. Plentiful Refreshments will again be available at the Y. Results will be streamed and awards (other than the top prizes and cash) distributed immediately.

The National Weather Service will be contacted about securing more favorable conditions than the frigid temperatures that prevailed in 2017.

Registration for the 2018  Stockade-athon opened on June 15.