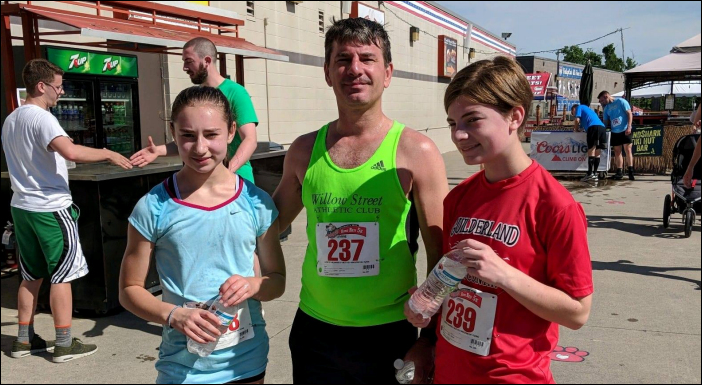 Our family started out doing the Mother’s day race every year since the girls were born. Initially my wife pushed the girls in a stroller until they decided they wanted to run it with her. So when the Valley Cats started the Father’s Day race a few years ago I asked my daughters if they wanted to run it with me as a team. The past few years they have allowed me to run with each girl on an individual team which has been great. Its always fun to get out with your kids to exercise and get a chance to come back to a ball game!  This year was particularly sweet as we placed in the top three. 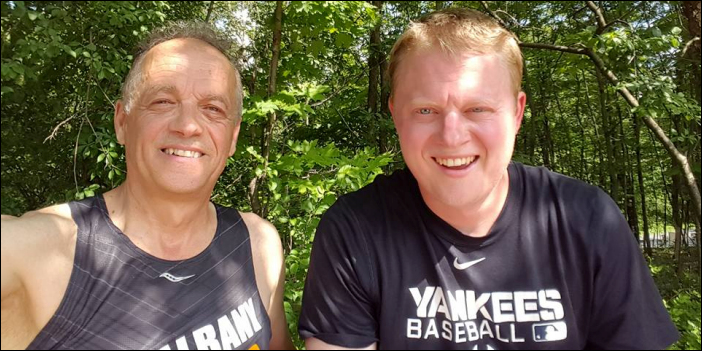 When my son Cody called me two weeks ago and suggested we run the Mount Greylock Trail Half Marathon on Father's Day, I thought this "might" be a good idea. I had my reservations but being a geezer, I never know how many times I will get an opportunity to do this with my son. As it turned out Cody's good idea turned out to be a Great Idea!

We started together. After about a mile into that monster initial climb, Cody went ahead on his own. The rest of the day I plugged along trying to make friends with the mountain. When I finally got to the finish, Cody was waiting to run the last 100 yards with me. Steve Faluotico, Alanna Moss, Ann Tarrant and a few others had stayed around to see me home.

After I dropped Cody off it occurred to me; I honestly can't remember the last time I pinned a race number on to run a race. Sure, I have run a couple of low key events, scored on 3 x 5 cards or self timed, but I don't think I have official had a running bib pinned to my chest since before my last foot surgery, probably 6 or 7 years ago, maybe more. Without realizing it, Cody had given me back, at least for this day, an opportunity to participate as a competitor again in this run game thing that has been such a big part of my life. It wasn't until I got it back, if just for this one day, that I allowed myself to realize how much I have missed it.

Thank you my son, you gave me a GREAT Father's Day.

My son Jim, who is an ultra runner himself, helped crew me for the Laurel Highlands 40th Annual 70.5 mile trail run in Pennsylvania. The race starts in a parking area for a half mile and then continues for 70 miles over magnificent trail. The scenery is gorgeous with open canopies of trees and thick ferns that in some parts where almost up to my shoulders, and stunning rock formations to run through. The first 8 miles are spent climbing steeply but after that it is relatively flat.

I ran this because I wanted to qualify for the Western States 100. My wife Ginny and my son Jim helped crew me. They followed me from aid station to aid station and helped supply me with water, gels, food but most of all good cheer when I spotted them. At mile 46 Jim was “allowed to run with me” for the last 24 miles (!), but had to follow me and even though it was an incredibly slow pace for him, he stayed with me the whole way chatting as we ran. Runners must finish in under 22 hours for ones time to be official, which was my first goal. My second was to run under 20 hours in order to qualify for the Western States 100. Nineteen hours and 43 minutes later I finished the race. I had qualified!

My son Jim is a veteran ultra runner. On April 7, 2018 he ran the Umstead 100 miler in Raleigh, North Carolina, and placed first. I helped crew him and ran the last 12.5 miles with him. We have run together before in the JFK 50 and the Vermont 100 but at different paces.

After the race, Jim told me that he hopes I can enter the Western States 100 so he can crew me again. Now that’s real love!!