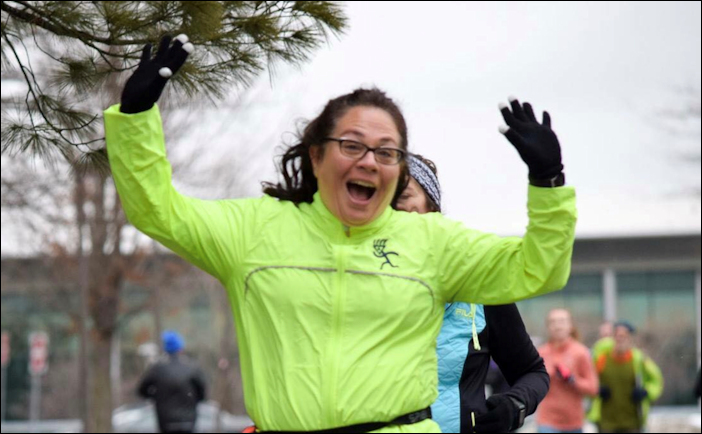 Once upon a time (about 10 years ago), in a faraway land (Menands, NY), a stressed out, overweight smoker (yours truly) began to fall apart. After at least a decade of poor choices, bad vices and a general couch potato existence, I decided to make a change, any change.

I was always fascinated by running. I’d walk around the Crossings and when I’d see a runner, I’d watch their movements and their facial expressions. I noticed most of them had some things in common - they looked so peaceful and so confident in their movements. They also looked so darn healthy.

So in 2007, I jogged my first few steps. I barely jogged a block, and at least three walkers passed me along the way. I tried to add just a few more steps every time. I heaved, I ached, I waddled. I smoked a cigarette as soon as I arrived back at my car. But it was magical.

In 2009, I signed up for a couch to 5k program. I completed my first 5k in about 45 minutes and I was hooked. (And yes, I smoked a celebratory cigarette at the end of that 5k). 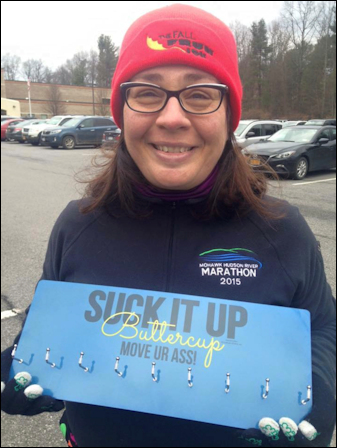 It was also in 2009 that I fell in love with running. I ran 10ks, 15ks, my first half marathon in 2011, and then my first full marathon in 2012. During my marathon training, my dear friend told me about another woman she knew who had recently been diagnosed with Stage 4 lung cancer, a woman not much older than myself. My dear friend was also pregnant with my second goddaughter; I never smoked in front of my first goddaughter, and I desperately wanted to be a non-smoker by the time her sister was born. So, during this time I asked myself a rather fundamental question: “what are you going to do when you cross that 26.2 finish line, light up a celebratory smoke?”

That next day, June 2, 2012, I decided I would try not to smoke. No pressure, no expectations - I would just wake up and not smoke for as long as I could that day. One day became a week, became a month, became a year. Now I’m over five years strong, my friends!

I became obsessed with PR’ing. Every race I ran, every training run, any time I ran, I became fixated on my time. I have to run faster. I have to run stronger. I have to run farther. If I didn’t perform well at a race, I’d have a temper tantrum. I’d cry. I’d swear off running. In hindsight, I laugh at how silly I was. At the time, I was convinced that if I didn’t make this running gig stick, I’d revert back to my old, unhealthy habits.

A year or so later, my favorite aunt passed away. By the end of her life, muscular dystrophy had ravaged her body. She could no longer walk. During my last visit with her, she could barely lift a fork to her mouth. But holy smokes, she was as stubborn as the day is long. On that day of our last visit, she refused my help when navigating her wheelchair. “I can do it myself.” You sure could, Aunt Jul.

My aunt’s passing put many things in perspective for me. Unlike Aunt Jul, I could walk. I could run. What a blessing! I began to connect with my aunt during my runs. A friend of mine helped me connect with my aunt in the outdoors and nature, and I would literally talk to my aunt during some of my longer training runs and races (so if you’ve heard any stories of the strange woman who talked to herself while running, that would be yours truly).

While I continue to have some lofty goals (I’d love to qualify for Boston some day, perhaps when I’m 80 and the BAA takes pity on me), I’ve learned to run for the sheer joy that running brings to my life. I run because running gives me peace. Running can heal. Running is fun!

Now that I’ve made my peace with running, and I’ve embraced the basics of why I started running in the first place, I’ve discovered that I love sharing my experiences with other runners. Through my volunteer coaching and mentoring, I’ve realized that I want to earn my coaching certification. So, in March 2018, I’ll be taking a run coaching certification course through the Road Runners Club of America (RRCA). After that, I hope to expand my knowledge through various other programs, and ultimately create a coaching program for a specific type of runner: the athlete who runs a 10 minute mile or more. There is so much potential, energy and talent in these runners, I’d be honored to work with them. 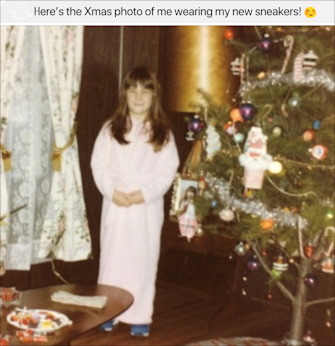 I forget who told me this (or maybe I heard this in a movie or during a motivational speech), but someone said that if you want to figure out what career path will fulfill you, look back on your childhood to remind yourself of what you wanted to do when you grew up. Recently, a friend of mine asked me to share with her some photos that were taken of me as a child during the Holiday season. I instantly remembered a photo my parents took of me in front of the Christmas tree with my new pink robe and my shiny new pair of Nike sneakers; I had asked Santa for a pair of sneakers so I could run my little heart out.

I guess I’m finally listening to my inner child. :) Hope to see you on a run soon!

1. If you’re feeling burnt out, ditch the watch and take a couple months off from racing. Run simply to run. The magic will return!

2. No matter your pace or your goals, don’t be afraid to hire a run coach. Coaches can offer so much more than PRs. Quite frankly, be leery of coaches who are fixated on PR’ing - they may be more interested in how they look when you PR rather than how you’re doing.

3. Strength training is critical for injury prevention! There are a lot of boutique gyms and strength programs out there; pick one that works for you (and your budget) and make strength workouts an essential part of your exercise repertoire.

Larissa Bates: A Profile in Courage