Day at the Fair 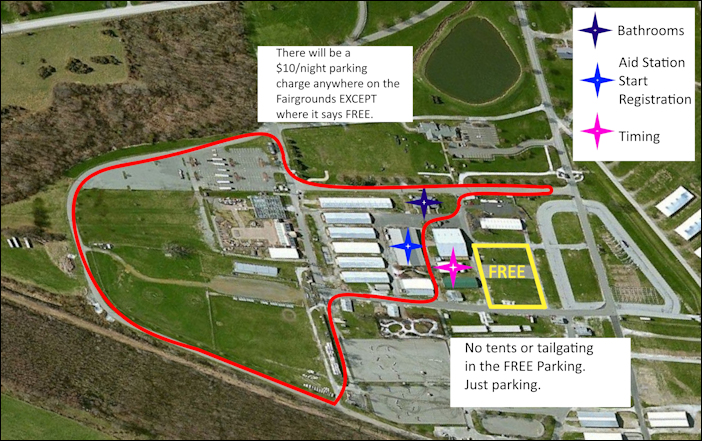 The story of my write-up for the 2017 edition of the New Jersey Trail Series One Day at The Fair actually began at the end of the 2016 race. As I crossed the finish line for the 50K event, my thought was, “Well that’s done; not sure I need to do that again.” As I was thanking the race director and receiving my finisher’s award (a license plate) and preparing to say, “It was great meeting you but I’ll probably never see you again…,” he informed me that my 2ND place finish in the 50K earned me a 75% discount off next year’s registration. Always a sucker for a sale, “See you next year my man” was the reply instead.

In truth, it wasn’t just a reduced entry fee that sold me on running the race again. It was the race’s simplicity and the singular purpose of each of the runners that hooked me. The One Day at the Fair I imagine is an idiosyncratic race by most runner’s standards. The event is entirely self-contained on a 1 mile circuit in a rural NJ county fairground and gives the intrepid participant 5 different options to choose from: marathon, 50K, 6 hour, 12 hour, and 24 hour. For that rare athlete for whom 24 hours of running is not enough, you can participate in the group’s spring event, 3 & 6 Days at The Fair, whose name and mission is self-explanatory.

I recognize that a 50K is not for everyone. I am even more cognizant that a 50K completed around a 1 mile loop might be even less appealing. But stay with me here. I was one of the lucky ones because I didn’t get closed out. The race can only accommodate 200 runners due to the course layout and simultaneous events. The old adage, Familiarity breeds contempt, couldn’t be farther from the truth. I learned to love every step of the course, and that was during the first 4 or 5 miles of the 2016 edition. My return for 2017 was like seeing a long lost old friend, except they hadn’t changed a bit.

I’ve been running marathons since 1983, completing my first one as a college sophomore. 30+ years and 20 or so marathons later maybe running something a little longer might be worth a try. Also, the race organizer for One Day promised a 24 hour time limit for the marathon and 50K virtually guaranteeing that no matter how slow I went, I could probably finish before the course was closed.

A race director cannot control the weather, but those few hundred of us who lined up in 2016 and 2017 for a 9:00 AM start were blessed with solid conditions at least for the daytime hours. In 2017, evening and overnight temps descended into the low teens, probably OK for a 2 or 3 hour run, but not 12 or 13. But the race director can control race amenities and for this, I applaud the husband and wife team that organize the New Jersey Trail Series events. Instead of yet another race T-Shirt, I have an awesome One Day at The Fair vest and jacket to wear on cold days and to the gym. And the culinary offerings...? If such a thing existed for road races, this race would receive the 5 Star Michelin rating. To accommodate the needs of runners who might be on the course for a full day, the kitchen opens early and literally stays open all night. The usual ultra-offerings were of course available (Swedish fish; GORP; M & M’s; PB&J pretzels and other salty snacks; Gatorade; de-fizzed soda; etc.) but so were a full range of hot items such as soup, grilled sandwiches, hot dogs, cheeseburgers, rice and beans, and quesadillas. For me, the main challenge was holding off on eating much (besides a school of Swedish fish and a few handfuls of GORP) until the race was over as I was forced to run directly in front of the kitchen every mile! A fellow participant joked that it might be worth the registration fee (approximately $100) just to hang out and eat at the buffet for 24 hours. Not a bad idea for 2018.

The One Day also gave me the opportunity to share the course with some running greats. In 2016 the male and female winners qualified for consideration for the USA National 24 Hour Team (who knew such a team existed!) by running 142 and 140 miles respectively. In 2017, a Swedish runner who had finished 3RD at the 2015 IAU 24Hr World Championships (148.48 miles), spent about 15 hours of her valuable time completing 103 miles, possibly as a warm-up for another event, or maybe a cool down from the July 2017 IAU 24Hr Championships (145.77 miles). Also on the course in 2017 was a former USA Women’s Ultra Runner of the Year. I’ve never been so proud and awed to be passed repeatedly (and often) by my competitors.

I learned that finishing 2ND again in the 50K in 2017 did not qualify me for another discounted entry fee. Apparently too few participants in the 50K this year. I didn’t take it personally; I was slowing considerably while many runners who paid a lot more than me kept racking up the miles, literally for hours. I suspect I’ll try again at the One Day nonetheless.

I recognize that I am increasingly in the minority of runners in that I shun big events, have no tattoos, and don’t own a GPS watch or Fit Bit. There were certainly plenty of runners at the One Day that were fully accessorized but the race itself was stripped down to the essentials. For the marathon and 50K, do your allotted laps and go enjoy the post-race spread. For the 6, 12, and 24 hour participants, run as many laps as you can until your allotted time is up or until you’ve had enough of running in circles. Not quite the World Major Marathon Challenge, but a fine outing nonetheless.

I suppose that is what makes running a ‘Big Tent’ community. Ultimately all you really need to run is a decent pair of shoes and weather appropriate attire. And if you’re racing, an official Start and Finish. Everything else is just icing on the cake. Speaking of icing and cake… did I mention the dessert selection at the One Day?