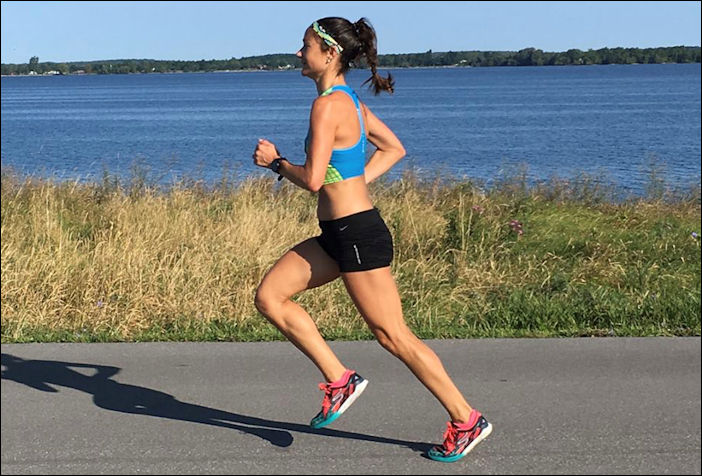 After wrapping up a relatively satisfying spring season, I took a break from the mid to end of June. July started with some base miles for a couple weeks and then came the workouts. Pretty much all my long runs had a workout incorporated. This was actually nice since it made the long run go by faster. Most of them were alone, but I did meet up with some of the Willow Street ladies on occasion.

During an easy run one morning my hamstring cramped and it felt like a pull. Naturally, I freaked out. I got in for an appointment the next 2 days (thank you Stephen Ryder and Dr. Bath). The pain lingered for 2 weeks and then after a 20X400m workout it was completely gone, yay! There was no problem for about 2 weeks until once again on easy run it tweaked. Back to ART (active release therapy), exercises, massage, stim, ice, etc. 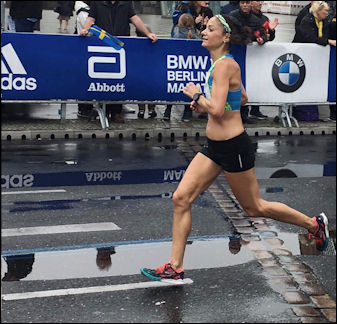 I spent a week in Colorado and worked with my good friend who is a PT out there as well. Amazingly, the pain disappeared again. Only briefly did I feel it once more during a 25 mile run at altitude that closed out 102 miles for 7 days (90 for the week), so it was a win! It was great to have a vacation where I could run my favorite routes with some old running buddies, sleep and relax.

After coming back from Colorado, I went to Watertown (with my teammate Erin Lopez) to run an 18 mile race as part of my long run. The plan was to warm up a few miles and then do 15 at MGP. Of course, I started at marathon goal pace and held that for 15 miles. I then shut it until the last mile to close in 6:08. After my warmup and cool down it was a successful 22 mile day. I had the self-confidence I needed for Berlin.

I went into Berlin confident 6:15's would be a doable pace through mile 20. I knew I had done some really long runs this cycle with depletion so although I was anticipating miles 20-26 to be hard, I knew I was strong. Once again, I knew I was flirting with this 2:45 barrier, but I felt things were looking good.

To make a long story short, the week leading up to the race I was super stressed. AirBerlin (who I was flying with) declared bankruptcy. 200 pilots called in "sick" and hundreds of flights were being cancelled with no refund. My return trip was changed, however my directed flight to Berlin was still scheduled. My parent's flight completely changed. People were claiming their flights were getting cancelled with as little as 30 minutes notice. I spent countless hours trying to get through with them, booking and cancelling several flights with other airlines. In the end, it all worked out, but it was still stressful at the time!

Getting a bagel was impossible. Instead, I settled for 2 rolls with my normal peanut butter and banana. I took the underground with Martha and Ralph to the park. From there, we walked to the athlete entrance where I left them and went on my own. I walked in the rain about another mile until I reached my baggage area. Since it was raining I didn't want to check anything yet. I sat down on a poncho, took off my wet shoes and socks and waited. I worried I hadn't eaten enough and was searching for food, which didn't exist, my gels would have to keep me full. Eventually I checked my bag and walked to my corral, which we couldn't enter since the hand cyclists were in there. There was nowhere to warm up, so that was a lost cause. At 9:00 the hand cyclists went off and everyone started climbing over a good size fence to get into our start area. I couldn't believe this is how we were entering!!! I asked a tall guy to help me over, the last thing I needed was to fall! As I stood there I felt something on the back of my leg. I turned around and yes, there was a man peeing behind me and it splattered on my leg. Definitely in Europe. 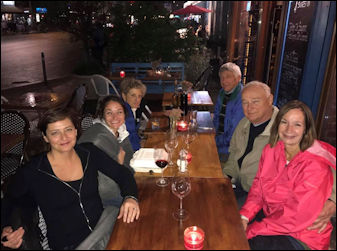 It took 18 seconds to get to the start line, which was exactly what I figured. I found the blue tangent line immediately and stayed on that. After the first mile (6:14) it was still crowded. I started to notice I was slipping with every step. I moved off the blue line thinking that was the issue. Nope, the road itself was slick. Damn it, was it the racers or was there oil on the road? As the 8k approached I looked for my family and saw my mom and dad. I was shocked I saw them because how many spectators were at that point and how many runners were near me. Okay, 5 miles done.

The next 5 I thought I had it in the bag that day. I felt great. I kept trying to slow down and was still running under 6:15's extremely comfortably. At the 10k my watch was only .04 off, which was perfect. I knew I needed to account for ~26.4 miles as a final distance and stay around my pace to ensure an OTQ. There were no mile markers just kilometers, so I relied on my watch. I felt more comfortable looking at my Garmin 26 times than searching for the kilometer markers and hitting the lap button 42 times. Around mile 11 my right glute/proximal hamstring got tight. Okay, it doesn't hurt I thought. I kept trying to massage, punch it, whatever I could do to loosen it up-- which is a lot harder to do while running than I thought. I still maintained my pace. I saw my family again around mile 15. Miles 11-14 were 6:14, 615, 6:13, 6:17 and then 6:21... that 6:21 I had felt my knee. Okay, I can run through this. The next 2 miles were slower, but not bad. Then 17-19 hurt. I made myself run to mile 20 and was thinking if I had to walk then,I would. I was going to finish the marathon one way or another no matter how bad my knee hurt.

It was the worst second half of a marathon in awhile. I yelled a couple times in pain. I was miserable. Eventually I got to 38k and saw my family again. The only thing that seemed to put a little fire under my butt was seeing another woman in front or one coming up alongside of me. The last 1k I was with another women who started to pull away. I thought I at least was going to get one position higher and fight the last 1/2 mile-ish. I hung on and then sprinted as hard as I could at the last second (the finish stretch seemed FOREVER). I got her, probably not even by 1/2 a second, but I got her. I finished 33rd overall female, not bad for a rough and disappointing race.

I got my medal, talked with a few other Americans and made my way over to my bag. Once again, we had to walk around a good amount. I was unmotivated to walk back to the changing tents and decided the middle of the grass field was good enough to strip down, hey I'm in Europe. I found Ralph at the family meeting area and we waited for my parents and sister to get there. We walked just far enough where we could get an uber and went back to the hotel so I could shower before grabbing a beer and food!

I'm still being very cautious with my knee. It's not 100%, but it’s not as disabling as it's been in the past. I took 5 days completely off from running and have started back up. What's next is dependent on my body. I have ideas, but I'm not pushing it if my body doesn't want to listen. Time will tell!

Profile of Karen in Adirondack Sports